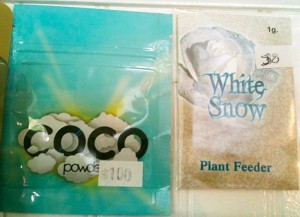 The half-gram bottle of bath salts promises an “invigorating” and “energizing” experience. But the new designer drug, called MDPV (or “legal cocaine”) is sending an alarming number of curious teenagers and seasoned drug users to emergency rooms and mental hospitals throughout the country, according to the Rocky Mountain Poison and Drug Center, the poison control center for Hawaii, Idaho, Montana, Colorado and Nevada. It reports that two weeks ago it had only three calls relating to bath salts across all five states. As of Feb. 16, however, that number had jumped to 13 calls.

The substance, disguised as “bath salts” or “plant food,” contains a toxic chemical called mephedrone and is deceptively marked “not for human consumption.”

“We are really alarmed,” says Alan Johnson, chief executive officer of Hina Mauka, a residential treatment facility in Kaneohe. “We haven’t seen cases of bath salt use yet but it’s a growing concern. It produces intense cravings very quickly. They inhale it, which makes it a lot worse. There are other agents in it that might be interacting with the drug but we don’t know because it’s proprietary information.”

“Bath salts have already been linked to an alarming number of ER visits across the country,” says Nora D. Volkow, M.D., director of the National Institute on Drug Abuse (NIDA) in a recent NIDA newsletter. “Mephedrone presents a high risk for overdose. The [limited] information we have is worrisome.”

In Hawaii, local law enforcement officers on all the islands have reported mephedrone being sold as a new “ecstasy-like” drug on the street.

During an investigation of drug dealing in Kona on the Big Island in October 2010, police found controlled substances and a powder identified as MDPV at a local residence.

“This incident clearly indicates that this new chemical is already present in Hawaii,” according to Keith Kamita, administrator of the Department of Public Safety’s Narcotics Enforcement Division.

On Oct. 15, 2010, Kamita called for an “emergency scheduling,” to place MDPV and another designer drug called 4MMC onto a Schedule I controlled substance category on a temporary basis. Of the five schedules (or classifications) listed in the Controlled Substances Act, Schedule I contains the most harmful and dangerous drugs, including marijuana, heroine, peyote and ecstasy.

“MDPV and 4MMC first caught my attention when it was put on the FDA’s Med Watch List,” Kamita says. “Although we’ve only had a few cases, it’s a danger to the public, which we have learned from other states.”

Mephedrone is increasingly being sold at local convenience stores, smoke shops, drug paraphernalia stores and online as a legal product. The toxic white powder, which is manufactured in China, is chemically similar to stimulant compounds found in the khaki plant of eastern Africa.

MDPV comes in the form of capsules, tablets or white powder that can be swallowed, smoked, snorted or injected. It is sold online for about $25 per 300 mg., with a gram running anywhere from $40 to $100.

“Recently, we have had a lot more severe drug cases, clients coming into our detox center with severe paranoia, hallucinations and other mental as well as physical problems,” says Carolyn Rose Slane, director of detoxification services at the Salvation Army’s Addiction Treatment Services facility. “They stay in bad shape for days.”

“I am deeply concerned about the distribution, sale, and use of synthetic stimulants that are marketed as legal substances,” said newly appointed White House Drug Czar Gil Kerlikowske at a press conference a few weeks ago. “They pose a serious threat to our young people or anybody who uses them.”

On Feb. 1, Kerlikowske praised Hawaii, along with half a dozen other states, for “introducing legislation to ban the retail sales of Mephedrone.

State legislators introduced two bills this session, each recommending the classification of mephedrone-laced “bath salts” as a dangerous drug. But legislative wrangling dragged on about whether the drug should be placed under the jurisdiction of the state’s penal code or under the Department of Public Safety’s “controlled substance schedule.”

Rep. Aquino explained that HB 1217 was deferred because the title of the bill did not match it’s content. HB 1085 was then introduced, which would essentially mimic the original House bill by classifying Mephedrone as a Schedule I substance and placing it under the jurisdiction of the Department of Public Safety.

As of Feb. 17,, the bill had passed through the Committee on Public Affairs and Military Safety and will next be heard in the House Judiciary Committee.

A review of current websites offering “bath salts” shows many sites are no longer in operation. For example, one site advertised: “We only offer the purest Mephedrone plant food at 99.94%. All orders come in discreet packaging.” Yesterday, the site added this message: “We are now closed. Thanks for your business.”

–Cover story published in The Honolulu Weekly on February 23, 2011–