How To Make It in Tribeca: Be Sleek Yet Just Historical Enough 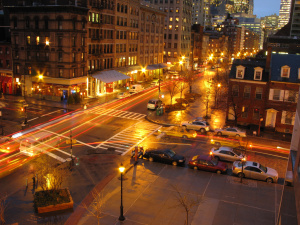 Historic designations are like monkey traps (yes, these exist): they work in the beginning, but eventually their intended targets learn how to out-smart them. Case in point: development in Tribeca.

For years, the neighborhood’s “historic designation has helped preserve [Tribeca’s] architectural character and low-density environs,” the Wall Street Journal writes, but developers are increasingly finding ways to get around the zoning restrictions.  Spurred in part by buyers’ high demand to live in the low-density, somewhat remote area, brokers and developers have lined up a number of new projects that are set to open in the next 18 to 24 months. While some of these new projects are loft and warehouse conversions, most of them are ground-up construction projects.  And boy are there a lot of them.

VE Equities has two new buildings in the works: an 11-story, 13-unit condo on 290 West Street and an 11-story, 22-unit building on 11 North Moore Street that has a 7,500-square-foot penthouse with a private pool. Of late, VE Equities seems to be driving the bulk of new developments in the area, which includes two earlier condo buildings built at 1 North Moore Street and 471 Washington Street.

Part of the reason why the company has been able to put in so many new developments, according to the New York Post, is because they match the style of the new buildings with nearby landmarks. “For 290 West, we wanted to create something that relates to the industrial landscape of Tribeca,” architect Morris Adjmi of the architectural firm Adjmi and Andreoli told the tab. The new development at 11 North Moore will “be glassy, framed with stone,” and, like other VE Equities properties “will feature gyms, libraries, playrooms, storage and bike rooms.”

Also soon to be built is a 34-unit edifice on 71 Laight Street, featuring loft-style residences and not one, but three penthouses.

Other new developments in Tribeca include a building on 250 West Street and the 84-unit Reade57 apartment, the Journal said. And, like we mentioned earlier, demand for these Tribeca units is colossal. Units at Read57, which started going on sale at the end of 2011, sell for $973,000 to about $3 million and the building has already reached its halfway mark, with closings slated to begin in July.

The Journal also mentioned a slew of non-residential developments that have sprouted up in Tribeca, like the Michelin-starred Tamarind Tribeca and Atera, which goes to prove that development is certainly on the rise.

Or, as Tribeca historian and resident Oliver Allen told the Journal, “When we moved here in 1982 we thought it was the frontier—it sure ain’t the frontier anymore.”

Nope, it sure ain’t.