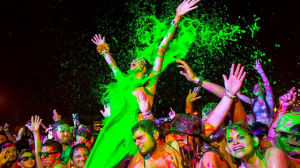 Sometimes, it takes a disaster to instigate change. In this case, it was undelivered packages.

By 2009, Life in Color (then called Dayglow) was picking up momentum. What had started two years earlier as a paint-throwing EDM party for college students in Tallahassee was now touring all over Florida.

More than a thousand people attended each event and upwards of 600 bottles of paint were used every night. Fans in other states clamored for a national tour; some, an international tour.

Business was so good that some of the party’s co-founders dropped out of college during their senior year to pursue the project as a full-time job.

A new movement had begun. Getting squirted, shot, and soaked with paint was what the people wanted and LIC was there to give it to them.

But on one particular day, a few hours before a Gainesville show, the party throwers encountered a problem: they had no paint. The packages containing their order were late. They were screwed.

“We were like, ‘What the hell do we do?'” recalls Sebastian Solano, one of the co-founders.

The solution: Hop in their cars and drive to as many Michaels Arts and Crafts stores as possible. “It was ridiculous,” Solano laughs. But it saved the night and the near-disaster taught them that Life in Color was growing too big to rely on Michaels for their supplies.

What they needed was a distributor. They needed gallons of paint, not ounces.

In the seven years that Solano and crew have been planning shows, a lot has changed.

Once a $15 one-nighter, LIC’s exploded into a two-day, $100-plus festival, starring EDM superstars like Kaskade and Diplo, as well as a Ferris wheel and zip line. “It has become the Red Bull of paint parties,” Solano says.

So far, Life in Color’s been held in over 55 countries and an estimated 600,000 people attend the events each year. Everyone from Steve Aoki to Calvin Harris and 2 Chainz has performed at these shows, as well as a slew of acrobats and Cirque du Soleil-type performers.

Nevertheless, there are some things about Life in Color that have managed to stay the same over the years. The four guys who founded it — Solano, Paul Campbell, Lukasz Tracz, and Patryk Tracz — still run the event and David Solano, twin brother of Sebastian, still DJs nearly every show. Also, a lot of attendees still wear white.Even the paint technology has evolved. Instead of using plastic squirt guns and bottles like in the early days, LIC has developed its own equipment. There are guns that can shoot neon goo for two minutes straight and canons that can drench up to 200 people with a single blast. For next week’s festival at Miami’s Sun Life Stadium, Solano and crew will unveil their newest piece of artillery: a party weapon that can shoot 11 times more paint at five times the distance.

“You come in as a blank canvas,” Solano says. “And by the time the show is over, you’re a piece of art.”