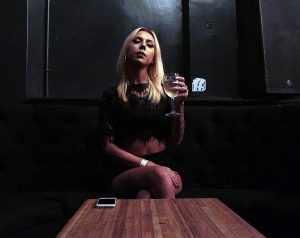 It’s Friday night, a little after 10:30, and I’m hoofing it through Hollywood to a spot called Las Palmas where Lil Debbie is premiering her new EP, Home Grown. There are stragglers hanging out front and they’re all young, definitely not over the age of 25, some of them probably not even over 21, which I assume is why they are hanging outside to begin with. Because that’s the thing about rap and hip-hop shows: They’re always mired with youngins.

The last — and only — time I saw Lil Debbie was back in 2013 at a place called Venue in downtown Oakland. The Venue is one of those multi-use spaces with a stage and a bar and lots of floor space, and I remember being impressed with the size of the room when I got there. Impressed because I didn’t know much about Lil Debbie, other than the fact that she was in the White Girl Mob, and impressed because I hadn’t been to a rap show since high school.

V-Nasty was there, and probably Kreayshawn, too, but all I can remember is Lil Debbie strutting across the stage in a pair of silk boxer shorts, gesticulating and waving the mic around. Her tiny, 5’2″ frame was a mere wisp compared to V-Nasty, and yet she was just as fierce, just as tough. The rest of the night is a blur — let’s be honest, I probably drank one too many glasses of Moscato — but I remember watching her perform as if it were yesterday.

I walk into Las Palmas and the entire place, which is about half packed, is almost entirely full of 20-year-olds. This makes sense; Lil Debbie is Internet famous, not (yet) big-time famous. Though she’s certainly surpassed Kreayshawn in the number of releases and singles she’s dropped, she’s still a niche rapper stuck in a niche genre: Bay Area hyphy/ratchet. Up until now, her music has stayed almost exclusively in that lane. She’s got songs about being ratchet and drinking cups of lean; popping molly and being “on fleek.” She sings about bitches trying to steal her man and she sings about Michelle Obama. She’s got the requisite twerk-references, the sexual innuendos, and all the clichéd, overused hip-hop keywords from the last few years in her music.

And yet, despite the predictability of her music, she’s not bad, even for a white girl. Perhaps that’s why most people, including myself, like her. Even though she started out as a scrawny Italian girl from Oakland (whose real name is Jordan Capozzi), she’s created this larger-than-life persona through Lil Debbie — and you know what? She’s nailed it. She’s the quintessential fierce bitch, the ratchet chick next door, the girl you don’t want to bring home to your parents. You can always count on her for racy lyrics, catchy choruses and house party anthems. It’s never easy to break out from a group and assert yourself as a solo artist, and yet that’s exactly what she’s done.

Think of a popular hip-hop song from the last few years and I assure you, the DJ is playing it. I’m standing in a cavernous room in the back of the bar talking to Lil Debbie and there are crystal chandeliers hanging from the ceiling and exposed brick arches lining the walls. Lil Debbie’s not as short as I’d expected and her look is on point. She’s got the gold hoops, the two-piece, black lace crop-top-and-shorts set, and the gold nameplate necklace. Her nails are as long as eagle’s talons and she’s demurely sipping on a chilled glass of white wine. And she’s nice. Like, really nice. This is not what I was expecting.

I learn that for the last three years, Lil Debbie has been living in Los Angeles (“Literally, I live down the fucking street”) and that she’s not good at multi-tasking (“So many texts, I can’t,” she says, putting her cell phone aside. “I just can’t right now.”). I also learn that I was wrong about Home Grown. It’s not, as I’d guessed, an ode to the Bay. It’s an ode to weed.

“I used to get shit for posting pictures of weed or me getting high, but now weed is legal and I’ve been encouraged to be myself more,” she tells me in her high-pitched, clipped voice. “I’ve been wanting to be able to discuss weed openly with people and I feel like this is the perfect time.”

She tells me she’s got a line of edibles coming out and says something about being “the complete opposite of a normal stoner” because she uses rhinestone-bedazzled grinders. She introduces me to Marcus, her friend and dealer, and he gives me a small vial of hash instead of a business card. A blonde girl with a neck tattoo and a gangly, gamine model wander over and suddenly there’s a small huddle of stoners talking about weed. 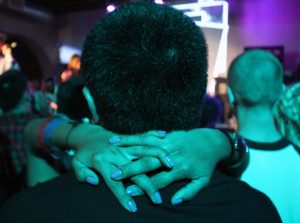 It turns out that even though everyone, including Lil Debbie, has brought their own blunts, no one’s willing to light up. “My homie was saying this place sucks on 420 shit,” says one guy who joins our group. “Yeah, I heard that was a bad idea at this place,” says someone else. Conversation halts for a few seconds as everyone lets the bad news soak in. “Damn, that sucks,” says Lil Debbie. “I’m still gonna be smoking on stage though.”

More people filter into the back room and pretty soon there’s a mini-party going on. A guy in what appears to be an unbuckled straight jacket is part of the crowd, as well as a guy in a red, green, and yellow knit beanie and a girl wearing a hair scrunchie. Bricc Baby, one of the featured rappers on Home Grown, walks over to me and asks me what I think about his outfit. (I tell him it’s “sporty”).

Five minutes pass, then ten, and finally Lil Debbie has had enough. “Let’s smoke in this bitch,” she declares. Blunts are pulled out of pockets and hands start scrambling for lighters. Huddles expand into larger circles as joints are passed from person to person. A feeling of peace and calm settles over the room and big, dopey smiles appear on everyone’s faces.

It’s hard to find a good spot to watch Lil Debbie from. The room is packed, shoulder-to-shoulder, and it’s clear that many of her fans have been holding down their spots for a while now. She launches into her first song (“Are we gonna do this or what?!”) and the crowd goes wild, cheering and waving their hands in the air. There’s a dancer onstage dressed as a female G.I. Joe doll and a photo montage of Debbie being projected on the back wall. There’s even a random beach ball onstage.

In the green room, when I’d asked Lil Debbie how many songs she was going to perform, she hinted that it wouldn’t be many. “I’ve worked so hard on this,” she said, “I just want to listen to it in the club.” But it’s clear that she’s not sticking to that plan. For almost an hour she performs singles from her upcoming EP, and towards the end, viral favorites. Bricc Baby comes onstage at one point to perform their song from Home Grown. 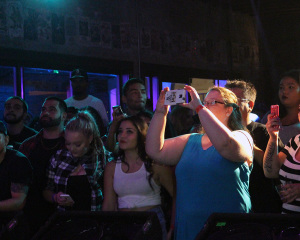 In between each song, she slips in random, short monologues. She’s a chatty girl and she’s obviously enjoying being in front of a crowd, especially one as enthusiastic and adoring as this one. Someone from the audience passes her a joint, which she gladly accepts, and a guy wearing a bucket hat takes off his shirt and starts waving a lighter in the air. A gaggle of short girls dominate a corner of the dance floor and grind one another. And a solo 50-year-old woman wearing jeans and a lot of metal rings and studs does her own weird little two-step dance in the back.

It’s almost 1 a.m. by the time her last song comes on and Lil Debbie seems almost sad. “I really love ya’ll,” she tells the audience. “I fuck with you and you fuck with me, even though I’m a lil-ass bitch and a mean-ass bitch and it’s hard to like a girl like me because I be angry and talk a lot. I’m a bitch.” The crowd lapses into hysterics, showering their queen with encouraging hoots and howls because they know she’s just kidding. Lil Debbie is not a bitch. She played extra songs for her fans, accepted their gratis joints, took selfies with them and enthusiastically waved to people from the stage.

“I fuck witchu,” she says to the crowd. “And I’m gonna remember this time we chilled here forever.”