Who Is Joanna Newsom? 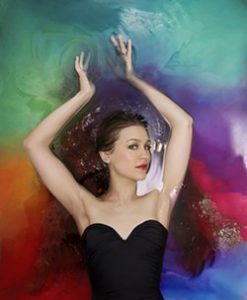 In 19 minutes and 53 seconds, I tried to crack Joanna Newsom. I wanted to figure out who she was, because Newsom, a 34-year-old singer and harpist raised in Nevada City, is an equation that doesn’t add up.

Since Newsom emerged on the scene in 2004 with her debut studio album, The Milk-Eyed Mender, fans and journalists alike have been trying to figure her out. (She’s even had problems with stalkers.) With her long, flaxen hair, whimsical song titles, poetic lyrics, and ethereal, polyrhythmic song structures, there’s something otherworldly about her. (Tolkienesque terms like “Elfin princess” and “wood nymph” are frequently used to describe her.)

In her music, Newsom is haunting and cryptic. Though her sound is firmly rooted in folk, it’s not the happy, cutesy folk of Simon and Garfunkel or Peter, Paul, and Mary. Instead, she sings about loneliness, loss, regret, and misunderstanding — that is, if you can understand any of her lyrics in the first place. Newsom’s voice is high-pitched and quivering, and her lyrics are couched in metaphors and symbolism — so much so that one fan has created a website devoted entirely to deciphering her lyrics. (In “The Things I Say,” Newsom even sings a few lines backwards.)

But there’s another side to Newsom, one that likes antique shopping and collecting weird things. Unlike the musical Newsom, a recluse who refuses to partake in social media, the non-musical Newsom is a media-friendly go-getter. She’ll make a cameo in Portlandia, narrate a friend’s film (Paul Thomas Anderson’sInherent Vice), or provide vocals for the theme of The Muppets. This Newsom also has a sense of humor. She laughs a lot — during our interview, her remarks were peppered with chuckles. And she’s even married to a famous comedian, Andy Samberg. Yes, you read that right: The Brooklyn Nine-Nine star and formerSaturday Night Live! staple is husband to Newsom — who is also second cousin to California’s lieutenant governor, Gavin Newsom, the most handsome mayor in San Francisco history.

If this makes no sense to you, you’re not alone.

But unfortunately, I, like countless others before me, was unable to solve the riddle that is Newsom. While I know that she hates Spotify and is repulsed by bananas, I still don’t know what “The Book of Right-On” is or from where the loneliness and sorrow in “Cosmia” stems. I still don’t understand how someone who pens rambling, fantastical ballads about anthropomorphic bears and monkeys could marry a guy made famous for a video called “Dick in a Box.”

A long shot to begin with, my quest to figuring out Newsom was littered with limitations. I only had 20 minutes over the telephone to get to Newsom’s core, not to mention I had been given a list of “two things she did not want to discuss” from her publicist (though really it was more like three). Apparently, Newsom doesn’t like talking about her home, what neighborhood she lives in — “please do not mention that in the piece” — or her marriage “in any detail.”

In other words, I could ask her about her music and, well, that was about it. And so I did. But the interview wasn’t a total wash. Newsom, I learned, is rather garrulous and likes to provide long, thoughtful answers to what would otherwise be simple questions. She uses the word “basically” a lot and, like a dog-eared book ofCliffsNotes, tends to sum up her points at the ends of her statements.

That said, without further ado, here are seven things I managed to uncover about the mysterious singer-songwriter.

1. Her upcoming tour is shaping up to be a family affair. Newsom’s brother Pete, who played drums on her last album, Divers, is accompanying her band on this tour, and her sister Emily, who plays the cello, might also join a leg. Newsom originally asked Pete to contribute to Divers because she wanted each song on the album to sound different from the next. The way that she achieved this was by having different drummers, keyboardists, guitar players, violinists, etc. play on each track. “I wanted a force pulling in the opposite direction to create a distinctive environment so that each song sounds and feels different,” she said. Though she’d never worked with her brother before, she brought him in because his style is so different from hers. Pete, who is also a keyboardist, is known for playing hip-hop and R&B instrumentals, which Newsom said appealed to her because of its “heaviness and funkiness … which really served certain songs on the record.”

2. Her voice has changed. In the spring of 2009, Newsom developed nodules on her vocal chords from straining and not properly warming up her voice before singing. “I’d do other dumb things, too,” she said. “Like, my band and I rented a house in Big Sur to work on Have One On Me. It was a cold house that was warmed by a wood stove and the wood stove was poorly ventilated. So I was singing the whole time in a smoky room, drinking whiskey, and I just shredded my voice.”

Instead of undergoing surgery — she’d heard horror stories of procedures ruining people’s voices thanks to scar tissue that can form later — she opted for vocal rest. This entailed not talking for a few months, which meant Newsom walked around in silence with “a little dry erase board on me.”

After that “weird” experience, she visited a vocal coach — her first — who taught her warm-ups that would help prevent her from developing nodes again. Before that, Newsom had never warmed up her voice. She’d avoided seeing a vocal coach for much of her life because she was “always kind of afraid that … he or she would teach [her] something that would make [her] real voice go away.”

After two lessons, she felt equipped enough to do the warm-ups on her own. She now does them every day for an hour. As a result, her voice has changed (and you can hear it on her new album). “At a certain point, I added the upper register and lower register and gained a full octave of singing just from literally la-la-la-la-la every day,” she said. “I have more strength and range now.”

3. She does not work out. When talking about her vocal warm-ups and how her voice has changed, Newsom equated the experience to doing yoga — something which she does not do. “I don’t do yoga or anything I should for my physical health,” she said. “But if I did — like, if I stretched every day, I could probably start doing things that I’d never been able to do before.”

4. Newsom used to want to be a writer. When she was younger, she “thought about being a writer often.” She wrote short stories while attending Mills College in Oakland, but eventually gave up because she thought her stories “were not good.” Writing is not “the form that I am at my best,” she said.

5. Often, the lyrics are the last thing she works on for a song. This was especially the case with her last album, Divers, though it’s “kind of always what I do.” She might have an idea of what she wants the song to be about or of what the song’s “spirit” is, but she doesn’t start putting these ideas into words until after the instrumentals are finished.

6. She may or may not take years to complete her next album. Spending four years on Divers was not intentional, Newsom said. “I don’t think I actually knew how much work it would be or how long it would take. And I think if someone had told me that, I would have despaired slightly.” In fact, she didn’t even realize that she’d been working on it for so long until she finished the record and “looked at the calendar.” Though she wouldn’t “consciously” work on an album of such depth and length again, she admitted that “it is possible that without realizing it that the next idea I want to do ends up being another kind of can of worms.”

7. When Newsom gets old, she wants to become even weirder than she already is. She already counts bird watching, interior design, and furniture design as three of her hobbies, and plans to add wearing “kaftans galore” to her list of old lady aspirations.