How DJ Jazzy Jeff and 20 others spent a week creating an album. 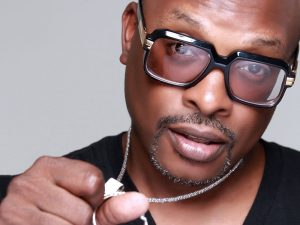 If there’s one thing you should know about DJ Jazzy Jeff, it’s that even though he lives in the woods outside of Philadelphia, there’s almost always a few people at his house. In fact, it’s for this very reason that he was 30 minutes late to our phone interview.

“I’m sorry,” he tells me when I finally reach him. “I had some family members stop by.”

For someone who averages 160 shows a year and always seems to have his hands in a new project or two, you’d think the constant deluge of visitors to Jeff’s home would be distracting, not to mention unwanted. But he insists it’s not.

“There’s always someone here, but it’s not a bad thing,” the 52-year-old says. “I’m trying to create a creative safe haven for people.”

In fact, Jeff — who most people associate with Will Smith, a longtime friend with whom he formed the two-time Grammy Award-winning hip-hop duo DJ Jazzy Jeff & the Fresh Prince in the mid-’80s — thrives on collaboration and teamwork. It is for this reason that he has hosted biannual workshops and sessions — called the PLAYlist Retreat — for producers, DJs, and songwriters at his house for the last three years.

“It’s like a camp atmosphere,” Jeff says. “We get about 18 to 25 trailers and line them all up outside.”

It was only a few weeks ago, at the end of January, that Jeff held his most intensive retreat yet. Instead of focusing it on networking and coaching, he and the roughly 20 attendees decided to challenge themselves to write, create, and record a full-length album in exactly one week. Aside from that deadline, there were no other rules they had to abide by, except one: The finished product had to be good.

“It wasn’t made to be on the radio or to sell it,” says Jeff, who admittedly still posted the finished album on iTunes and Spotify, but did so under the artist name “The PLAYlist” instead of his own. “The only goal and objective was to make music that gives people goosebumps. To make something that feeds your soul.”

The result is Chasing Goosebumps, a 15-track album steeped in neo-soul, smooth jazz, and yacht rock. The textures and vibes of the tracks oscillate between smoky, languid, and shimmery, and live instruments, like keys, horns, and drums, are redolent throughout the album. So, too, is the voice of R&B singer Glenn Lewis, who laid down the vocals for each song. There’s even a few wildcard ditties, like a twinkly, wordless lullaby that landed smack-dab in the middle of the record.

Though Chasing Goosebumps was recorded just a few weeks ago, it doesn’t sound contemporary. Rooting the album in neo-soul, a genre that had it’s heyday in the ’90s, is one reason for this, as is Lewis’ soulful, retro vibrato that sounds exactly like Stevie Wonder’s. Jeff also believes the democratic way that the record was made played a role in dating it.

“It was almost like our challenge was to make the music that we miss hearing,” he says. “I feel as though so much music is made by individuals today, and the music that we grew up loving was always made by a collaboration of people. … So it wasn’t one person who did everything with this project.”

And because the team operated like a band, with input from everyone along each step of the production process, it’s almost as if it were created on an assembly line.

“It was like a factory,” Jeff says. “We would get in the room and come up with ideas for a song. Then we would rehearse playing it maybe two or three times, and then record it. Once we got a proper recording down, we gave it to the songwriters and they’d come in and write the song. Then Glenn would sing it.”

In fact, the process was so immersive that people would forget to eat.

“When you’re working on something and you’re that involved, you don’t think about anything else, so we didn’t think about food,” Jeff says of the catered meals they had delivered to the house three times a day. “I didn’t even get a chance to see any of the livestreams because we were the livestreams. We were so deeply involved that people didn’t pick their heads up until we finished.”

And when that seventh day approached, many of Chasing Goosebumps’ creators faced a bittersweet reality.

“When it came time to leave, everybody kind of went through a really depressed period because it was over,” Jeff says. “It was like, ‘Wow, for seven days I’ve been dug in, and I’ve never been that dug in creatively.’ You almost didn’t want it to end.”

« Chronicles of The Juice Man » Beyond The Stage