When The Going Gets Tough, Growl

Beach Goth 2016 was a fiasco and City Club sounds too polished, but The Growlers don’t give a shit. 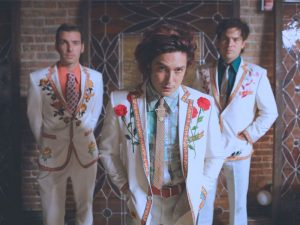 I’m lucky to get Brooks Nielsen of The Growlers on the phone when I call on a recent Thursday afternoon.

“I do the whole ‘I’m not talking to anybody anymore’ thing a lot,” the frontman says. “Even at this stage, I get people interviewing me who don’t know my music, who’ve never heard The Growlers.”

In fact, as recently as “like, two weeks ago,” Nielsen wasn’t taking calls from journalists. But I’ve caught him at a good time: The Growlers, all three of whom are from Dana Point in Orange County, are home for a week and have some time to spare. It’s a rare occurrence for the garage-rock band that has spent an average of seven months a year on the road since releasing its debut, Are You In or Out, in 2009.

“We didn’t know that we were touring more than anybody else,” Nielsen says of the band’s early years. “We didn’t know how much we were supposed to be touring.”

Eight years and seven albums later, The Growlers — whom Nielsen calls “by now, pretty much broken-in road dogs” — are ready for a break. Though they’ve still got two North American tours and a European leg to muscle through, the band has no future shows scheduled after their June 10 appearance at Primavera Sound in Portugal.

“We’re going to take the summer off, I believe,” Nielsen says. “We’ve slowed down a lot this year.”

The band has changed in other ways, as well. Like Nine Inch Nails or Red Hot Chili Peppers, The Growlers have a reputation for cycling through bandmates pretty regularly. Nielsen blames drug addictions, commitment issues, and difficulty adjusting to the touring life for some of the losses — but admits that the band’s early habit of “grabbing friends and turning them into musicians” was not the smartest plan, either.

Nielsen, along with the band’s two other founding members — Matt Taylor and Kyle Straka — now make it a point to hire professional musicians for tours and features. Although it required making decisions that “didn’t feel good and weren’t fun to make,” the adjustments have been worth it.

“The band feels better than it ever has,” Nielsen says. “It’s very strong, very tight.”

You can hear the improvement in 2016’s City Club, a disco-leaning record filled with syncopated slow burners and galloping glam-rock ballads. Produced by Julian Casablancas of The Strokes, the album is crisper, more refined, and less lo-fi than The Growlers’ previous self-produced and lower budget works. It helped that Casablancas cut a lot of tracks that “sounded like the obvious Growlers songs that have already been made a thousand times before,” Nielsen says, and the longer production process didn’t hurt either. Whereas previous albums were recorded in the span of two to four weeks, the making of City Club stretched out over six to seven months.

“It was kind of nerve-wracking for me, because it’s still embedded in me that time is money,” Nielsen says. “So it was freaking me out. But in the end, I’m glad that it all happened.”

Some fans have admonished the new album for sounding too polished and radio-friendly, but Nielsen couldn’t care less.

“I don’t really give a fuck,” he says, “because at the end of the day, we make this music for ourselves and we choose to share it with other people.”

It was the fifth year of the two-day music festival The Growlers throw in Santa Ana every October. Though advertised as a lower-cost, more indie alternative to larger festivals, last year’s event was a piteous shit show, rife with overcrowded stages, aggressive security, and clogged toilets, plus more-expensive-than-normal rates for tickets, drinks, and parking. On the final day, torrential rains flooded the grounds, leading to numerous delays and lineup changes. Grimes’ set was called off because her equipment was damaged by the storm, and Nicolas Jaar replaced his live show with a mere DJ set.

“Last year really killed us,” says Nielsen, whose band issued an apology via Facebook after the event. “Everything we complained about or wanted to change happened.”

The aftermath of Beach Goth 2016 was and continues to be especially hard to deal with. Pissed-off fans petitioned for refunds, and then the Observatory, which has hosted the festival since its inception, added salt to the wound by filing a lawsuit against The Growlers over the use of the name “Beach Goth,” which they claim ownership of.

“It’s pretty crazy,” Nielsen says of the case, which is still ongoing.

Still, the band is far from despondent and harbors hope that they’ll be able to throw another Beach Goth this fall.

“I don’t think all good things have to come to an end,” Nielsen says. “And I don’t want to skip a year just because some things went sour.”

« Clap Your Hands Say Who? » Summer State of Mind