For more than four decades, the KPOO DJ has been spinning ’50s and ’60s tunes on nighttime radio. 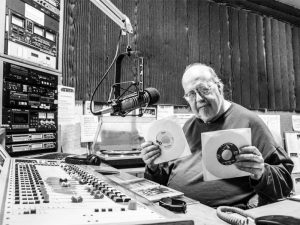 It’s a little before 8:30 p.m. on a Monday night, and Jim Rigsbee is sitting in the studio at public radio station KPOO, shuffling through a stack of CDs and 7-inch records. For more than 40 years, Rigsbee — better known to listeners as Rockin’ Jim — has been hosting Grinders Grooveyard, a late-night program consisting of pop and rock hits from the 1950s and ’60s.

Rigsbee inherited the show in 1976 from its original hosts, who created the program when KPOO was founded in 1971. A retired customer-service agent and “jack-of-all-trades” for the San Francisco Chronicle, the 69-year-old has long grown accustomed to the show’s nocturnal hours, which are currently 8:30 p.m. to 11:30 p.m. on Mondays, but in the past have continued as late as 2 a.m.

Rigsbee — wearing a crewneck sweatshirt, Manchester United sweatpants, and oval wire glasses nestled halfway down his nose — is an S.F. native who currently resides in the Outer Mission. He remembers listening to Elvis Presley on the radio at the age of 8 and can recall seeing shows at iconic (and now-defunct) turn-of-the-century concert venues, like the Fillmore West and Avalon Ballroom.

“I saw all kinds of great music back then,” Rigsbee says, listing off acts like Jefferson Airplane, the Grateful Dead, and Quicksilver Messenger Service.

But it’s the music of his adolescence — which is to say, tunes from the ’50s and ’60s that came out before he was old enough to purchase tickets to see a show — that have stuck with Rigsbee the most. He describes it as a time in his life when he was old enough to remember things, but too young to participate, and has a theory that “people tend to gravitate towards the things they grew up with.”

When Rigsbee originally took over Grinders Grooveyard, the show played strictly vocal doo-wop groups, like the Del-Vikings, the Marcels, and the Nutmegs. Though you’ll still hear some of that in Rigsbee’s rotations — the Nutmegs are, after all, one of his favorites, along with Otis Redding, Bruce Brown, the Spaniels, and Amos Milburn — he’s spiced it up over the years, adding jazz, soul, blues, and gospel to the mix.

Because he’s been DJing for so long, Rigsbee creates his playlists on the fly, plucking songs to suit his mood or sate his listeners (many of whom call the station with requests or queries about the names and dates of the records he plays).

With time, Rigsbee’s preferences have also changed, and he’s found that he plays more ’60s jams than before. (For those wondering how Rigsbee can tell the difference between decades, he says that ’50s music is “smoother” and includes more doo-wop, while ’60s tunes have more “harmony and soul.”)

Perhaps the biggest mystery is how Rigsbee hasn’t run out of material after all these years, especially given that he’s pulling from a fixed era in the past. It’s not like new Five Satins or Mary Wells singles are being released half a century later.  But Rigsbee says this has never been a problem.

“I’m still discovering new stuff all the time on the internet,” he says. “I’m still learning about ’50s and ’60s songs that I’ve never heard before that just knock me out.”

In lulls between songs, Rigsbee freestyles on the mic, sharing anecdotes about the first time he heard a song — “Let’s start with a record I got as a kid that some family friends gave me” — old concerts he went to, and sayings he still remembers from “back in the day.” A frequent user of the salutation “heidi-ho,” Rigsbee — who also utters phrases like “Saddle up, it’s pony time!” — makes it a point to do birthday shoutouts for musicians, as well as announce artist deaths when they occur.

Startlingly few crises have happened during his tenure at KPOO, and the only near-disaster Rigsbee can recall happened years ago.

“One time, I got off the bus and I forgot my 45s,” he says. “I realized it immediately and raised my arms to wave the bus down. I just thank God that he saw me and opened the door, because that was a 100-count box of 45s that I would have lost.”

In a time when hearing oldies on the radio has become increasingly scarce — in recent years, SoCal’s famed retro radio station K-EARTH 101 has ditched mid-century classics for ’70s disco and ’80s New Wave — Rigsbee knows he’s an anomaly on the airwaves. And he’s grateful for the opportunity to be able to do what he does.

“There’s hardly anybody that caters to the kind of audience that I play to, because oldies are now considered classic rock hits and stuff from the ’70s, ’80s, and ’90s,” he says. “It’s something I feel very privileged to do, and I guess you could call it my mission in life. It’s something that I can look back on, be proud of, and say, ‘I turned people on to that music.’ ”

« Dank Digits » Crusaders of the Strange