A look at the myriad of songs that have been released since the Commander-in-Chief entered the picture. 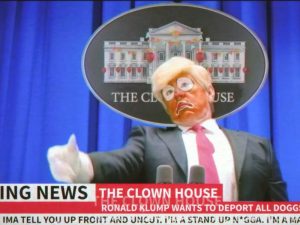 Los Angeles rappers YG and Nipsey Hussle spearheaded the trend of anti-Trump songs when they released their boom-bap track “Fuck Donald Trump” in March 2016. Since then, a number of artists from a wide range of genres have followed suit, releasing their own resistance songs and proving just how widespread hatred for Trump is within the music industry.

Dave Eggers launched the musical project “1,000 Days, 1,000 Songs” (originally 30 Days, 30 Songs) last October, which consisted of songs from acts like Death Cab for Cutie and Local Natives that urged listeners not to vote for Trump. (After Trump was elected, the project changed its name and transitioned into a playlist featuring one motivational, inspirational song per day.)

About a month before the election, Eminem dropped the minimalist freestyle “Campaign Speech,” which includes a line intended to make Trump supporters think twice about their candidate of choice. “You say Trump don’t kiss ass like a puppet / ’Cause he runs his campaign with his own cash for the funding,” he raps. “And that’s what you wanted / A fuckin’ loose cannon who’s blunt with his hand on the button / Who doesn’t have to answer to no one? Great idea!”

Over Christmas, two artists used holiday songs to lambast Trump. Bon Iver drummer Matt McCaughan gave a nod to trump in his solo track, “Happy New Year (Prince Can’t Die Again)” with the line, “You could be any horrible thing and rise to the top of this shitheap,” while Fiona Apple performed a scathing rendition of Nat King Cole’s “The Christmas Song” at a Standing Rock benefit concert. Instead of singing the classic lyrics, Apple swapped in some of her own, like “They know that Trump is on his way / He’s got Black boys in hoodies locked up on his sleigh.” Less than a month later, Apple released another tune calling out the Commander-in-Chief, this time for uttering his now-notorious catchphrase “Grab ’em by the pussy.” The track, called “Tiny Hands,” became an unofficial anthem for the Women’s March, with participants chanting “We don’t want your tiny hands / Anywhere near our underpants.”

The week of Trump’s election, artists released a deluge of protest songs against the incoming president. Sister duo CocoRosie urged listeners “to rise, shout, and burn the house down” in their fuzzy, electronic tune “Smoke ’em Out,” while Arcade Fire urged people to stick together during tough times in “I Give You Power.”

On Jan. 20, the day of Trump’s inauguration, New York rapper Joey Bada$$, who also happened to be turning 22 that day, released the flashy, ’80s indictment, “Land of the Free.” Over a synthy beat, Bada$$ relays the hardships of being Black in America and decries the country’s failed mass incarceration system. Unlike Arcade Fire, which doesn’t reference Trump by name in “I Give You Power,” Bada$$ has no such reservations. “Donald Trump is not equipped to take this country over,” he says in the track. “Let’s face the fact, ’cause we know what’s the real motive.”

In fact, Trump’s inauguration even motivated a band who hadn’t released new music in six years to drop a song. Titled “Hallelujah Money,” the psych-electronica tune by the Gorillaz blasts Trump in vague, poetic terms and exhorts listeners to embrace money as their new god, so as to highlight the influence that wealth has on our country’s politics.

Even though Trump’s now firmly ensconced in the highest office in the nation, musicians are still voicing their disapproval of him and churning out negative songs. A few weeks ago, Maryland rapper Logic released his first-ever political song, “America.” Over a looped sample, the 27-year-old spits lines about how white power dominates in the U.S. and how ludicrously easy it is to obtain a gun. He disses George Bush and Trump — “George Bush don’t care about Black people / 2017 and Donald Trump is the sequel” — and he throws Kanye West under the bus for initially voicing support for the Donald — “Shit, I’ll say what Kanye won’t / Wake the fuck up and give the people what they want.”

Perhaps the most entertaining musical work that’s come out of Trump’s election is the parody music video for BadBadNotGood’s Snoop Dogg-featured track, “Lavender.” Set in a fictional world where everyone is a clown and Snoop Dogg does infomercials for a cereal called Snoop Loops, the video includes a Trump impersonator named Ronald Klump, who holds a press conference to announce the deportation of all dogs. Later, Snoop holds a gun up to the Clown-in-Chief’s head and fires, resulting in the release of a flag that says “Bang!” instead of a real bullet. The video ends on a cliffhanger showing Klump in chains and Snoop and his homies smoking weed and dancing by their lowriders.

The hyperbolic project — which director Jesse Wellens came up with while smoking weed — ended up eliciting a response from Trump himself, who tweeted: “Can you imagine what the outcry would be if @SnoopDogg, failing career and all, had aimed and fired the gun at President Obama? Jail time!”

But while Trump may make threats, it’s clear his intimidation tactics have no hold on the music community. In April, Bruce Springsteen released the soaring classic rock gem “That’s What Makes Us Great” in a bid to remind listeners of all the good in our country and the power that we have to “turn this thing around / Before it gets too late.”

And just this month, indie duo HDLSS released its first single, “False Flag,” which celebrates hackers and whistleblowers, whom the band believes could be key in bringing down the Trump administration.

With one of the lowest presidential approval ratings in history, it’s clear that many people are unhappy with our head of state — and it’s likely the music being made in his disfavor has something to do with this. Never before has one president served as muse to so many works of art in such a short period of time. Artists across genres are contributing tunes to the movement, and a growing number of young musicians — like YG, Local Natives, and Kyle Craft — are becoming politically vocal for the first times. No longer relegated to hippie lore or basement punk shows, resistance songs are so popular they’re becoming necessary additions to any band’s discography. Regardless of age or genre, it’s now cool to make political references in music, and so long as Trump is in office, the sonic vitriol will keep coming.