Zoe Magee of Zoe Bikini has been selling swimsuits in the Mission for a decade. And yes, you’ll find itsy-bitsy, teenie-weenie, polka dot bikinis. 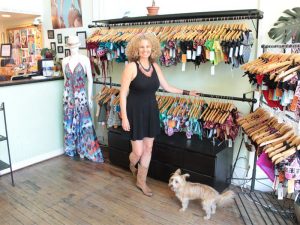 On 18th St. in the Mission, tucked between a salon and a wine bar, is a swimsuit boutique called Zoe Bikini. The brainchild of Zoe Magee — who designs every piece herself — its front half is filled with tropical foliage, healthy, size-6 mannequins, and racks upon racks of brightly colored bikinis.

The back half of the store, behind the desk and dressing room that Magee and her father built, is where the work stations are. Beside a cutting table littered with heaps of half-finished suits, a sewing machine sits equipped with every color thread imaginable, and there’s an entire wall of shelves dedicated to tiny glass jars filled with beads, rings, and other gewgaws.

Zoe Bikini celebrated its 10th anniversary as a brick-and-mortar shop this February, and while that’s a feat for any small, independent business, it is especially so for this shop. San Francisco is not a warm city, and bikinis can be a hard sell because there are so few opportunities to wear them. For years, obtaining a Zoe Bikini wasn’t easy for out-of-towners, as Magee didn’t have an online shopping option on her website until last November. But perhaps the biggest accomplishment is the fact that Magee has been able to retain her location in the heart of the Mission District despite all of the changes that the neighborhood has seen in recent years.

When Magee moved into the mint-green-and-white painted space in 2007, there was a fish market on the corner and her neighbors were a tattoo parlor, a noodle factory, and a nail salon. It was also thriving from a retail standpoint.

“It used to where all the fashion was,” Magee says. “There were a lot of boutiques, and we were all doing our independent, women-run fashion thing.”

But once the Mission became trendy, rents started to increase, and many of those boutiques and small businesses dissolved, making Zoe Bikini one of the last local apparel stores in the area.

“Now, the Mission is all coffee shops and restaurants and bars,” says Magee, whose store is around the corner from Gracias Madre and on the same block as a ramen restaurant, a pizza joint, and a burger spot.

A future as a small-business owner and swimwear-designer was something Magee never expected. She grew up in Santa Barbara in the 1970s and ’80s and learned early on — from her “total hippies” parents — how to sew. She began by making clothing for her dolls, and as a teenager, raided thrift stores for vintage dresses that she would then alter. After high school, she decided she wanted “to be a snowboard chick” and moved to Colorado, and later Tahoe. For fun, she and a friend started making snowboarding attire, like “giant, oversized, fleece hoodies” that they would sell locally and to friends.

Magee’s interest in constructing bikinis blossomed when she went home to visit her parents and realized she’d “got fat” and that her bikinis didn’t fit. Determined to wear one, she realized the only way to achieve that would be to make one herself. She’s not sure whether it was the intricacy of the work or the fact that she was saving tons of money, but she quickly “became obsessed with it, like nothing else [she] had sewn before.” As she had done with the snowboarding gear, she made custom bikinis for her friends and friends of friends, but it was never something she considered doing as a job.

“I didn’t know that was my thing,” Magee says. “It was just something I liked to do.”

She spent the next decade going to school, briefly studying to become a dental hygienist because she’s “really good with [her] hands” and “always had such great experiences at the dentist.” When she was 28, she moved to San Francisco, and within her first year, met the head designer of a local sample house on Market St. that designed and manufactured clothes for the likes of Bebe and Levi’s. Magee convinced them to take her on as an intern, and for the next few years, she learned the ins and outs of the business, including how to manufacture her bikinis in mass quantities.

In 2004, Magee, then 32, rented a studio and began wholesaling her suits, selling them in stores up and down the California coast. After a few years of dealing with “rude boutique owners” and feeling pressure to constantly “prove to the stores that [she was] worthy,” Magee decided to ditch wholesaling and set up her own shop.

After combing the city for locations, she settled on her current storefront and decided to construct an upstairs loft — which she now rents out to two hair stylists — so as “to ensure I wasn’t going to fail or go broke.”

Over the years, she’s studied her clientele, who mainly come into her shop, she says, to purchase a suit for an upcoming vacation. She’s learned what’s hot and what’s not — one-pieces, high-waisted bottoms, and thong bikinis are currently in, she says — and sells her bottoms and tops individually so that her customers can mix and match. Magee’s collections often include both a solids line and a prints line, and a recent perusal of her stock revealed suits in rich jewel tones, like emerald green, plus baby pink cloud patterns and reptile skin prints.

Her swimwear is also forgiving and accommodating. Big-chested? Try the halter top with the wooden buckle. Want to show off your behind? Check out the cheeky Brazilian cut. Feel like a little flashy? Opt for the suits decorated with gold beads, metal rings, braided detailing, or lace-up sides.

But though Magee has been able to stay afloat in San Francisco’s changing economy, she knows that if she wants to grow, she can’t stay here forever. She’s considered opening a “lifestyle boutique” in Marin that would sell clothing and accessories in addition to swimsuits. And, a few years back, she even toyed with relocating to or expanding in Southern California.

“I was just thinking, ‘How can I make more money?’ ” she says. “Because I barely just get by here.”

But neither idea seems right to her, at least not now.

“I came to the conclusion that I should just chill out and be grateful for what I’ve got,” Magee says. “My heart didn’t want to be down there. My world’s up here. This is my scene.”

She’s not ruling out the possibility of moving, but for now, Magee is content to remain where she is — at least for another four years, because she just signed a new lease.