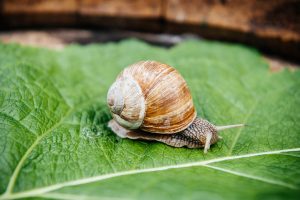 Some partners call their lovers “bae” or “boo.” But my boyfriend? He calls me “Snail Face.”

Technically, he’s correct. Twice a day, every day, I rub a tablespoon of snail mucin — also called snail secretion filtrate — over my face and neck. Even though it tastes bitter — my boyfriend learned this first-hand by trying to kiss me on the cheek — it’s the only thing that has worked to clear up my adult-onset acne.

I wasn’t a pimply teenager and never had problems with it until I hit my early 20s. Suddenly, I was forming blackheads seemingly overnight, and I had a particularly difficult time battling zits on my cheeks. I had every kind of pimple you could imagine: stubborn whiteheads, deeply embedded pustules, pus volcanos, and fiery-red bumps.

Though I’d been using a Cetaphil face wash for years with positive results, it obviously was no longer working. I turned to other tactics, and over the course of the next five years, I tried a number of zany and not-so-zany treatments. I used Proactive, which worked relatively well, except for the fact that it dried my skin out. I saw multiple dermatologists who recommended myriad ointments, like Differin and Tazorac, as well as prescription antibiotics, all of which I dutifully used, to no avail. Facials became a monthly ritual, and I tried everything from intense extractions to LED Blue light treatments and glycolic-retinol masks.

After meeting a woman who claimed using oils on her face rid her of acne, I did the same, rubbing coconut, avocado, and rose hip oils all over my face. (Note: This tactic didn’t work and only made me more pimple-y.) Somehow 3 percent hydrogen peroxide got added into the mix, and I started swiping that on my skin after washing. It worked well in preventing breakouts, but it bleached my eyebrows blonde, which wasn’t a good look. I swapped the hydrogen peroxide for apple cider vinegar, which also made an impact, but it was too smelly.

I also experimented with my makeup, switching to pore-friendly brands like Bare Minerals, Origins, and Cover FX, and taking days off from wearing products at all. I started using primers and washing my brushes obsessively. I even stopped using a washcloth to clean my face, opting instead for konjac sponges and paper towels to dry my skin.

While some of these treatments worked, none solved my acne problems entirely. Maybe my skin would be clear, but my nose would be peeling or still full of blackheads. I’d still get breakouts every now and then, and I had a few pores that were hell-bent on getting clogged and flaring up on a regular basis.

Fast-forward to today, and getting acne is but a distant memory. My trick: I started using snail mucin. At this point, I was willing to try anything to get rid of my pimples, so even though using a product made out of snail slime sounded a bit gross to me, I was game. I first learned about it through the Korean beauty website, Soko Glam, but I didn’t take the plunge and buy any snail products until my facialist recommended one to me by the skincare brand Biopelle.

The first two topicals I tried were Biopelle’s Tensage Daily Serum ($125) and Cosrx’s Advanced Snail 96 Mucin Power Essence ($21). After cleansing and washing my face, I applied both creams to my dry skin in lieu of lotion. They differ in texture, color, and feel.

The Tensage Serum is thick and white, and leaves your skin feeling slightly tingly, while the Advanced Snail Mucin is clear, sticky, and hydrating. Within a week, my skin was almost entirely clear of pimples, and now, after a using snail mucin for a year, I feel confident enough to go out in public without foundation on.

The funny thing is snail mucin isn’t even intended to treat acne.

Made of hyaluronic acid, glycoprotein enzymes, antimicrobial and copper peptides, and proteoglycans, it’s marketed as an anti-aging tool that helps diminish fine lines, reduce inflammation, and increase fibroblasts and collagen. The fact that it reduces pimples, is just a lucky addition.

Snail mucin is also not cruelly obtained. There is no one way to collect it. Different companies use diverse methods, as well as different species of snails. And the snails aren’t killed or injured in the process.

Biopelle uses a species of snail native to the Mediterranean called Cryptomphalus aspersa, and the secretion is collected through stimulation. Several hundred snails are put into a five-gallon bucket and they’re lightly swung around for a few rotations. This activity agitates the snails, who release the secretion. Biopelle president Elliott Milstein said this secretion is different from the mucin they produce for mobility.

“It’s not like you can just put a snail directly on your face and have it move around to get those results,” Milstein said. He explained that the secretion produced by the snail’s movement does not contain the glycolic proteins and growth factors that the secretion acquired through agitation has.

After going through a few swings in the bucket, Biopelle’s snails then get to rest for a couple of weeks in “a sanctuary,” where they basically get to eat and have a lot of sex. Biopelle collects their eggs and uses them in its Tensage Stem Cell line, which helps produce new skin cells that can reduce signs of aging. The snails get a break in the Fall and Winter and are taken to a swamp in northern Spain to hibernate. According to Milstein, the average lifespan of their snails is twice that of snails living in the wild, which translates to about eight years instead of four.

The snail mucin used in the products Soko Glam sells is acquired differently, and most of the companies they work with are based in Asia.

According to Charlotte Cho, Soko Glam’s cofounder, the snails are placed over a mesh net in a dark and quiet room and left to slither about for a good half-hour before their trail of mucin is collected. Unlike Biopelle’s snails, the snails used to create Soko Glam’s products do not get agitated or stressed because Cho said, “optimal mucin production occurs when snails are well rested and comfortable in their habitat.

There are different theories about how the healing qualities of snail mucin were discovered. Cho explained that Chilean farmers were the first to recognize snails’ beneficial traits. “They noticed that their hands were visibly smoother and their cuts were healing quickly after handling snails,” she said.

Milstein had another take. He said that radiologists discovered the mucin’s healing effects after subjecting snails to x-rays and noticing that the substance they secreted helped heal their burns.

Snail mucin still has a ways to go before it catches on in mainstream formulas and loses its “ew” factor, but there are a fair amount of products on the market already. Quality varies, and Milstein warned that there are some companies that “actually just grind up the snail and don’t use the extract.” In other words, if a 12-ounce jar of snail mucin for $5 seems too good to be true, it probably is. While snail products aren’t as expensive as, say, a La Mer cream, you’ve got to remember that you’re paying for something that takes a lot of time (and a lot of snails) to make. But generally snail products cost anywhere between $20 and $200.

By now, I’ve recommended snail mucin to many friends and family, and of those who have been brave enough to try it, I’ve only heard positive results. Sure, it might deter your partner from kissing you on the cheek, but who cares? Your skin will look fantastic.