After Years of Busking and Touring, Fantastic Negrito Prepares to Release His First Full-Length Album 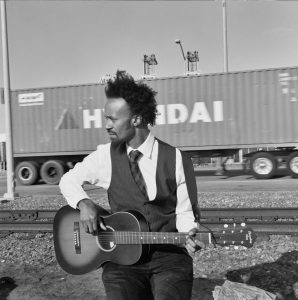 “It’s a bit far because we’ve got to go all the way to the basement,” says Xavier Dphrepaulezz, as he heads down a carpeted flight of stairs into a downtown Oakland gallery and recording studio. As the 48-year-old, better known as the black-roots musician Fantastic Negrito, turns a corner and leads me down a concrete hallway, he lists his most vital health tips.

“Exercise is good for you, so I’m always walking,” he says. “I don’t drink sodas or eat fast food, either. I’ve got to stay healthy. I’m only two years away from 50.”

We head down a second flight of stairs, and a wave of cool subterranean air washes over us. The dim basement, which smells faintly of dust, is cluttered with building materials, tools, and broken furniture. Not too many people come down here, Dphrepaulezz says, and I can understand why.

Suddenly, he stops in front of an old wooden freight elevator. “So, this is it,” he says. “This is where we were that fateful night.”

He’s referencing the evening over a year-and-a-half ago when he, three other musicians, and their instruments (a guitar, an upright bass, and percussion) squeezed inside of the almost-100-year-old elevator to record “Lost In A Crowd,” the Southern-inspired blues ballad that won NPR’s 2015 Tiny Desk Contest.

An Oakland native and former busker who performed on street corners and at BART stations throughout the Bay Area, the contest won Dphrepaulezz widespread fame, as well as $5,000 and a number of nationwide shows that have since snowballed into a full-time music career as Fantastic Negrito.

“You want a ride up?” he asks, looking at me with a devilish grin, his dreadfro slicked up in 45-degree angle spikes.

“You scared?” Dphrepaulezz asks. I nod. “Well, I’m going to ride anyways. I’ll meet you up there.”

He starts fiddling with a control panel, but something is wrong. The elevator won’t move.

“I wasn’t here for a couple of months and no one’s been using it,” he says, abandoning the ride and leading me back upstairs. “And you have to keep using it or it will just sink down to the ground and not budge.”

For most of 2016, Dphrepaulezz has been away on tour, visiting four continents and performing at numerous music festivals, like Austin’s South by Southwest (where he played five shows this past March). The remainder of this year is already booked — with shows in New York, the U.K., and Europe — and so, too, is 2017. In fact, in less than 48 hours, Dphrepaulezz will head out for yet another performance, this one at BottleRock in Napa Valley.

“It’s OK, you’ve just got to go to sleep and not party,” he says of the constant touring life. “At your age, it might be hard not to do, but at my age, I’m good. I’ve been to that party. I know how that ends.”

We’re now in a tiny rectangular anteroom on the second floor of the building — each of us perched on opposite ends of a garish gold antique couch, that, aside from the paintings on the wall is the only piece of furniture present — as Dphrepaulezz tells me about the lively parties he used to host here a few years back before Fantastic Negrito existed.

“I’d have professors and street hustlers come,” he says. “I remember there was a woman who used to come, and she’s 93 now, and she would sit on the couch right next to the topless bartender, and she would talk about when the Nazis invaded France. And that’s kind of what I’m into in terms of entertainment, like really bringing everybody together from all different walks of life and making them speak to each other.”

Today, the space — called “Blackball Universe” — is owned by a small arts collective that includes Dphrepaulezz; Malcolm Spellman, a writer and producer for the TV show Empire; artists; and “a hustling Jewish kid we grew up with.”

It was because of the collective, which makes decisions through voting, that Dphrepaulezz — who lost the vote — submitted “Lost In A Crowd” to NPR.

On Friday, June 3, a year and a half after winning the Tiny Desk Contest, Dphrepaulezz will release The Last Days of Oakland, his full-length recording debut as Fantastic Negrito.

The 13-track album was recorded here at Blackball and showcases Dphrepaulezz’s self-called “black roots music,” which is sort of like a twangy, gospel-fueled combination of retro soul and blues music. Written from a working class standpoint, the album covers socioeconomic issues, such as juggling multiple jobs, not having enough money, and struggling to survive through the winter.

But while you wouldn’t call the subject matter happy or upbeat, the instrumentals are twangy and lively, and Dphrepaulezz’s voice, which shifts from a scratchy baritone to a piercing falsetto, never fails to be captivating.

“Blues purists may hate what I do sometimes because it’s a little dirtier,” says Dphrepaulezz, who likes to think of his music as “intangible fruit for humanity.”

The album’s title sounds slightly ominous — if not apocalyptic — but he insists it shouldn’t be interpreted that way.

“The old Oakland is over with,” says Dphrepaulezz, who still remembers the days when Too Short was just a kid selling his music on the streets. “But when things end, the door opens for a new beginning. Oakland had this amazing time, and now it can have another amazing time. I think it’s on its way: You just need an old man like me to keep running my mouth and to be a bridge.”