Another Go For Faith No More

The punk-rockers are re-releasing their out-of-print debut after founding bassist Bill Gould discovered the masters in his basement. 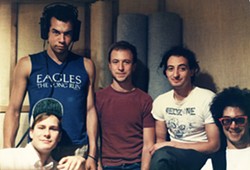 It’s San Francisco in the early ’80s, and Faith No More is a little-known punk-rock band consisting of four musicians all under the age of 21. In their short time together, they’ve already had three name changes — previously they were Sharp Young Men and Faith No Man — one demo-tape recording session in the garage of a friend’s parent’s house, and an array of “shitty gigs” at seedy clubs that never card and never fail to schedule them for 1 a.m. performances just before closing.

“We spent three years just gigging and trying to find our way,” Faith No More’s founding bassist, Bill Gould, remembers. “People didn’t really know what to make of us, so we had a hard time getting our name out.”

Undeterred, the fledgling band — which made a point of avoiding covers — chugged away creating new material, holing up in apartments, smoking weed, and “just making noise.” It was on one such day that the group stumbled upon a drum beat that would eventually become the backbone of their biggest hit, “We Care a Lot.” Gould and the other musicians chimed in with similar looping melodies, which were then incorporated into drummer Mike Bordin’s original pattern.

“It was just one of those things that clicked,” Gould says. “Like, we heard [Bordin’s] riff, and in five minutes were like, ‘That’s it!’ “

They penned the lyrics overnight, using the song’s droning melody as a springboard for similarly repetitive lyrics. Practically every line starts with the declaration “We care a lot,” followed by a litany of au courant topics and fads, such as Live Aid, (the double-venue music festival organized to raise funds for Ethiopian famine relief), Dynasty actor Rock Hudson’s diagnosis of HIV, NASA’s numerous (and occasionally disastrous) efforts to launch space shuttles, the original Transformers, and the killer bee epidemic sweeping through Central America. To modern listeners, these references might sound outdated and even foreign, but the band’s original intent — to sound concerned and irreverent at the same time — still comes through.

“It was both serious and tongue-in-cheek,” Gould explains. “You have to look at it through the time that it was written. Everybody was exploiting their humanitarian values. There was a lot of self-congratulatory bullshit going around that we were kind of making fun of.”

Though Faith No More didn’t know they had a hit in their hands, they knew they were onto something promising, so they decided to get the song, as well as four others, professionally captured on tape. For their previous demo, the band had recorded in a friend’s eight-track studio in San Leandro, but for the new material, they wanted to up the quality and record on 24-track reels instead.

“I thought if people could hear it the way we heard it live in rehearsal, then they would get it,” Gould says. “And the only way to do that was by using good gear and doing it right.”

Through a combination of tactics that included borrowing money and “doing all kinds of shit,” they raised $2,000 to pay for studio time, an engineer, and the tapes that would eventually become the band’s first album, We Care a Lot. It was exhilarating, Gould recalls, but also nerve-racking.

“It was a real gamble,” he says. “We were spending all this money that we didn’t even have to make those recordings. What would happen if the records just ended up sitting in the shelves? What if no one liked it?”

Now, almost three decades later, the band’s worrying seems almost humorous. No more than two weeks after the album came out, Faith No More signed with Mordam Records, which paid for the musicians to record five more songs for Side B. Within three months, they’d gone on tour and signed with a new label, Slash Records, and by 1987, they released “We Care a Lot” for the second time on an entirely new album, Introduce Yourself.

In the ensuing years, Faith No More lost and replaced band members — including singer Chuck Mosley, who fell asleep on stage during the band’s release party in 1988 — performed at the 1990 MTV Video Music Awards, earned three Grammy nominations, released four chart-topping studio albums, and embarked on five world tours before announcing their breakup in April 1998 through an email and fax.

In some ways, “We Care a Lot” traveled even farther than the band — and certainly farther than they’d expected when they first recorded it nearly three decades ago. Not only has the song popped up in movie soundtracks (which is how I first heard it) and been used as samples by other artists — like M.C. Hammer and Muse — but it has been used in video games and theme songs for television shows, like Discovery Channel’s Dirty Jobs.

However, the other nine tracks from the band’s first album suffered a worse fate. When Mordam’s distribution deal for We Care a Lot expired around 1990, the album went out of print. Since this was before the advent of the internet, those nine tracks that weren’t “We Care a Lot, ” which was re-recorded for Introduce Yourself, were lost to the ether. Today, you can’t even find them on Spotify.

Now that’s all changed. While cleaning out the basement of his home in the Haight last year, Gould stumbled upon the master tapes from the album’s original recording session in the early ’80s. On Aug. 19, Faith No More and Koolarrow Records will reissue the lost album as a double set, along with some of the band’s original eight-track demos from their days as an unsigned band and some live recordings that Gould also found from stints they’d played at an Upper Haight club called The Ivy. Members pooled old photos of the band among themselves, and Gould even contacted Mosley, who now lives in Cleveland, for the reissue.

On the album’s release date, Gould has choreographed a string of listening parties to be held in cities around the world, including London, Paris, Santiago, and Sao Paolo, but other than that, he says he has no idea “what’s going to happen.”

“It’s really hard to say,” he says. “It will be great if people are really into it, but I think it’s just cool to put [the album] back in the spotlight where it can get the attention it struggled to get before.”

← No Place Like Home Street Life For The Masses →