Autograf Shares Tips on How to Craft a Killer Remix 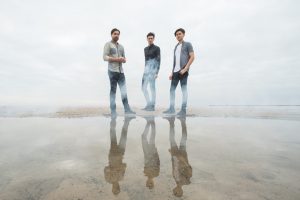 The Chicago electronic trio Autograf formed a few years ago when three friends (Jake Carpenter, Louis Kha, and Mikul Wing) decided to start an art group of sorts. They built pop art-inspired creations, such as an 8-foot-tall can of soup, threw parties, and eventually turned to making music.

But rather than craft original pieces of work, Autograf chose to make remixes.

“When you put out your very first song, that’s almost the hardest one because it’s hard to get people to listen to it,” Kha says. “That’s why remixes are helpful, because you’re working with something recognizable that people already know.”

The first remix, released in 2014, was a reinvention of rapper 50 Cent’s club banger “Magic Stick” into a hazy, glitched-out, deep house jam. Then followed riffs on artists such as Amtrac, Marvin Gaye, Stevie Wonder, and Pharrell, to name just a few. It wasn’t until last May that Autograf dropped their first original creation, “Dream.”

Though Autograf still makes remixes, they’re now mostly “official” send-ups commissioned by the original artists (like Fatboy Slim, Christina Perri, Odesza, Alesso, and The Grisswolds). This means that not only is the band paid to remix songs, but that artists actually want them to do so. Now that’s impressive. (Cue Drake’s “Started From The Bottom.”)

SF Weekly spoke with the members of Autograf and got their recipe on how to successfully concoct a remix.

“It seems like what a lot of newbie remixers will do is find whatever song is hot right now and then remix that just to try to blow up real fast,” Carpenter says. “But, really, the advice I would give is to remix a song that inspires you or that you hear something in. Even though it might not be a new, hot single, your remix will sound better and get a lot more attention.”

For example, the trio’s third single was a remix of the 1967 Marvin Gaye song “I Heard It Through The Grapevine.” Even though the original was almost 50 years old, it became Autograf’s biggest hit, swiftly garnering thousands of listeners on SoundCloud. Even today, the song has more listens (1.51 million) than many of the newer tracks that the act has remixed.

2. Choose a song of a different genre:

Although most remixes tend to be of a different genre than the original, this is still a good reminder to think (or listen) outside of the box when choosing a song. “It makes you work outside of your comfort zone, and you end up expanding your palette and making something that you wouldn’t have made otherwise,” Carpenter says.

3. Find an acapella version of the song to work with:

If you can get a stripped-down version of the song, it will be easier to excise the vocals for your remix. “You can do it without, but it’s a lot harder,” Carpenter says. “It’s really hard to cut out all the background music.” It’s especially difficult to do with a chorus, he adds, which is why you’re better off using an acapella version of the song.

To date, none of Autograf’s remixes (all of which are posted on SoundCloud) has been removed from the site. Technically speaking, they’re bootleg remixes (because permission from the originator was not obtained), but they’re legal (for the most part) because the band doesn’t sell the tracks or make money directly from them.

5. Sometimes it’s better to ask for permission after the fact:

Most of Autograf’s remixes these days are commissioned by artists, but back in the day, when they were first starting out (and making bootlegs), they rarely reached out to artists for permission. And, of course, the one time they did reach out to an artist, they got shut down and never ended up releasing the song. “We asked for permission instead of begging for forgiveness,” Carpenter says. “We should have just put the song out and seen if they’d notice. And then just begged for forgiveness if they wanted us to take it down.”

“Some people can get pretty butt-hurt about it because you are indirectly making a career of using some of their work,” Carpenter says. “Even though you’re not directly being paid for it or selling it, it is launching your career.” Because remixes are a legal gray area, there’s no standard on how to deal with butt-hurt artists. But there’s always a chance you could still get in trouble, he adds. “People can sue you for it, I guess.”

There are some sects of society that poo-poo the art of remixing because it’s not original work. But then again, everything we create is derivative. “If you look at any great art over the history of mankind, they’re all sort of copies,” Carpenter points out. “The Romans copied the Greeks, who copied the Egyptians. As long as you’re changing it and it’s actually different, then it has merit and deserves as much respect as the original.”

← Electronic Musician, Slow Magic, Is Inseparable From His Mask A Different Stream →