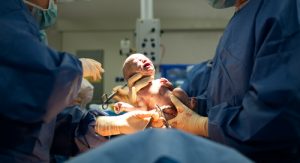 Concern about a newborn’s bacterial flora is not a topic you’re likely to hear discussed in the waiting room of the maternity ward — but that may change. A new study has found that the way in which babies are delivered exposes them to specific bacteria that could play a role in their future health.

The study, published online Monday in the Proceedings of the National Academy of Sciences, found that babies delivered vaginally had microbes on their bodies that resembled their mother’s vaginal bacteria, and babies delivered via caesarean section had bacterial communities like those commonly present on adult skin.

The finding is significant, scientists said, because the types of bacteria residing on newborns influence the development of their digestive and immune systems and may affect their health later.

Though previous studies had suggested that babies delivered by caesarean section lacked the benefit of protective vaginal bacteria, making them more susceptible to certain pathogens, allergies and asthma, no study until now had compared the bacteria on a newborn with those of the mother in a site of the body other than the gut, said Patricia Conway, a professor at the School of Biotechnology and Biomolecular Sciences at the University of New South Wales, Australia, who was not involved in the study.

Researchers at the University of Puerto Rico, University of Colorado at Boulder and two Venezuelan institutes sampled bacteria from nine women and their 10 newborns. Four of the babies had been delivered vaginally, and six, including one set of fraternal male twins, were delivered via C-section.

At all the sampled sites, babies delivered vaginally had microbial communities resembling those of their mothers’ vaginas, rich in the bacterial types Lactobacillus, Prevotella or Sneathia. Babies delivered by C-section had bacteria similar to those found on the skin and were not unique to their mothers; the dominant bacteria were Staphylococcus, Corynebacterium and Propionibacterium.

Elizabeth K. Costello, co-lead author of the study, said the results suggested that caesarean-delivered newborns might acquire their initial bacteria from incidental exposures to the hospital environment or from skin contact with another human being.

“In vaginal births, it’s pretty clear that the exposure is determined by the vaginal bacteria. But for C-section babies, each baby has a unique exposure to their environment — they were born at a particular time, had a specific doctor, etc. — that can determine the type of bacterial community that they might pick up and develop,” said Costello, who is now a postdoctoral fellow at Stanford University.

The study also found that, regardless of delivery mode, newborns have the same type of bacterial community at multiple sites on the body, in contrast with the highly differentiated communities found in adults.

Conway said there were ways to enhance the health and immune strength of newborns, regardless of delivery method.

“A woman who has had a C-section need not worry, because sometimes they do have to happen, and there are ways that C-section babies can be protected,” she said. Chief among these: breast-feeding.

Costello added that the findings, for now, were relevant only to the scientific community: It’s not yet clear how long the microbial differences that were detected persist and how much they influence a baby’s health.

“A lot of future research is needed before we can give any advice to expecting mothers,” she said.

–Published in The Los Angeles Times science section on June 25, 2010–

← Finding Stillness Within Trauma TV and children: Ads for fast food are up, ads for sweets and cookies are down →