Chronicles of The Juice Man

Popping our collars with Juicy J. 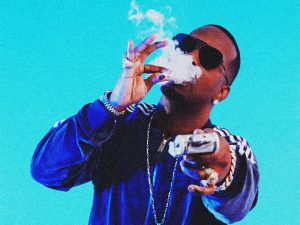 If you’ve never been to a strip club but still know what “bandz” are, you have Juicy J — the rapper behind the 2012 Billboard charting single “Bandz a Make Her Dance” — to thank.

One of the co-founders of the legendary Memphis rap crew Three 6 Mafia — the same group that gave us the Academy Award-winning single “It’s Hard Out Here For A Pimp” from the film Hustle and Flow — Juicy J has spent the last half-decade pursuing a solo career, collaborating with the likes of Kanye West, Nicki Minaj, and Katy Perry on a multitude of projects, including his forthcoming studio album, Rubba Band Business.

And though his sound has definitely diverged from the gritty gangsta rap style he perfected while in Three 6 Mafia, the rubbery-voiced emcee, who now makes upbeat, bouncy party jams, is still every bit the crunkmeister.

From a treadmill in his Beverly Hills home gym, the 41-year-old regaled us with stories about reading books on music at the age of 13, his lifelong commitment to health and fitness, and what it’s like being an OG in the industry.

SF Weekly: You released your first solo album – Chronicles of the Juice Man – while you were still in Three 6 Mafia. Did you warn the rest of the crew beforehand or ask their permission to do a solo side project?

Juicy J: It was all good. I mainly did it to make a little extra money. And you know what, I never really planned on going solo, period.

SFW: And yet here you are as a solo artist.

JJ: Well, as I was doing my solo mixtapes, I was really just trying to get the buzz back up for Three 6 Mafia. But when I was doing that, people were just looking at me, even though I was still with Three 6 Mafia. So it didn’t really spark the buzz with the group that I wanted it to. It actually sparked my solo career for me, but that wasn’t really my intention.

SFW: What was your life like in 2002 around the time that Chronicles of the Juice Man came out?

JJ: At the time when I made that, I was living in Memphis. I was good, and I had money — a Maybach and a Bentley. But my brother was in jail. There’s actually a song on the album about it called “Killa Klan,” where I talk about his case, the jury, the judge, and what he was going through as a Black man. If you listen to that song, you can hear that I was talking some real shit. I actually sat down and put some thought in that song.

JJ: Everything is good. Everything is still all gravy. We started a movement back in the ’90s and the movement is still here today. So even though we ain’t doing music right now, we’re always going to be Three 6 Mafia. And despite what everyone else says, everything is still good. I can still call up everybody and there’ll be no issues. We’re older now, we’re OGs, so the little bickering and the little disagreements that we had, that’s in the past.

SFW: Over the years, your sound has changed in tone and style. In the beginning, it was darker, more street, and gritty, and now you’re into making upbeat party music.

JJ: Well, I mean, music changes. And my life changes. I’m not the same young dude that was riding around in Memphis with a [boombox] in the car. I’m an older person now. I ain’t living in the hood no more. So, you know, you evolve with the music. Nothing stays the same. It would be impossible for me to make the same kinds of records today.

SFW: You collaborate with so many artists nowadays, many of them hip and up-and-coming. What’s your relationship like with these acts?

JJ: There’s a lot of artists that call me for advice on publishing and royalties and stuff like that, so I school them on that shit free of charge. I’m about helping out up-and-coming artists and seeing them change with time. It’s not about the money, it’s not about the credit. It’s just about helping somebody. And I think that’s what we were all put on this earth to do: to help people.

SFW: That’s awesome that you do that because I bet when you started out, you had to figure out a lot of that stuff on your own.

JJ: Yeah, pretty much. My momma was a librarian, so when I was 13 years old, I used to have her check out all the music books because I wanted to know the business part of music. I knew I was a good musician at 13 — I thought I was one of the best musicians in the world — but I didn’t know anything about the business part. So she’d check me out all these books on producers and royalties and publishing and stuff like that, and I used to read those books.

SFW: Is there anything that you think fans would be surprised to learn about you?

JJ: I’m a vegan. I’ve been a vegan for seven or eight months. I like to try new things. I always work out and try to keep myself in shape — that’s why I’m on a treadmill right now. My dad was always like that, too. He was not a vegan, but he would always eat the healthiest stuff and bring the healthiest stuff to the crib. I think I got it from him.

SFW: Do you think moving to L.A. has made you more fitness and health-oriented?

JJ: Well, I’ve been doing this since I lived in Memphis. I used to jog on the block, two or three miles a day. I was a health nut. I was eating lots of vegetables and fish, and I was always conscious about my health and my appearance. I feel like with being an artist, you don’t want to be out of shape onstage and running out of breath and shit while trying to rock the crowd. So it wasn’t L.A. that made me that way. I always was a healthy type, or trying to be a healthy type. I’m not going to say I’m 100 percent healthy, but I was always working out and lifting weights and jogging and eating balanced meals and shit.