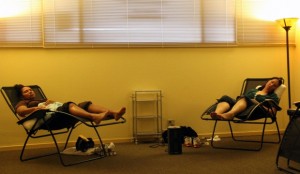 The process is simple: a whispered check-in with the patient—How are you feeling? What’s bothering you? Then the needles go in, quick and meticulously positioned, usually for no longer than 10 minutes.

Once the practitioner’s role is done—the needles are placed and the Meridian points connecting various organs of the body have been pricked— it’s the patient’s turn to take over. Lean back and relax, they are often instructed. Close your eyes and try to feel the sensations.

And so they do. In a dimly lit room on the ground floor of an office building in North Oakland, the patients lean back in their zero gravity chairs, their bodies cocooned in blue and green pillows and blankets. An I-Pod docking station plays songs from the album Realms of Grace: An Angelic Experience, which is basically Enya, minus the vocals. Nobody talks. Some read, many sleep, all wait. This is its second day since opening, but already the Oakland Acupuncture Project clinic is packed. In less than 48 hours, it has already treated 22 patients.

Last Monday, the Oakland Acupuncture Project opened up its second clinic across the street from Safeway on Grand Avenue. The original clinic, which opened in 2008 at its current location on Laurel Avenue, was started by two graduates of the Acupuncture and Integrative Medicine College of Berkeley, Roselle McNeilly and Whitney Thorniley.

McNeilly, 31, defines acupuncture, a centuries old medical treatment, as “the insertion of fine sterile needles into specific points of the body to trigger physiological change to encourage the body to heal itself.” It can be used to treat just about anything, she said, as it is a complete medical system that is used to treat anything from pain, anxiety, and insomnia to fertility, addiction, or colds.

Acupuncture is also a multifaceted treatment that can be used to treat more than one issue at a time. “A lot of people think about using it just for pain or whatever brought them in,” said McNeilly whose mother is a private practice acupuncturist in Ojai. “But when we talk to them they’re usually happy to find out that it can treat multiple things.”

While both McNeilly and Thorniley wanted to start a clinic, they didn’t feel comfortable charging the high prices that most private practices charge for acupuncture services. “There’s always a little awkwardness about charging rates that I couldn’t afford myself and none of my friends and family could afford,” McNeilly said. “How am I going to go about doing this work when most people in the world can’t afford the going rate for acupuncture, which charges $75 a visit more?”

Because it was a new trend, opening a community acupuncture clinic was a bit of a risk, she said, but the clinic quickly caught on. In the first month, the clinic made enough to cover ongoing expenses, and from there, business picked up quickly, she said.

Part of the reason the clinic became so popular was because patients enjoy the more social setting of the community room, she said, because it helps them to feel less lonely while getting treatments. Acupuncture requires patients to spend time resting with the needles in their skin as part of the treatment, so sitting in a room with other people is often more preferable to patients than spending that time alone in a separate room or cubicle, as is the case at private practices.

McNeilly said many first-time patients, such as Benjamin D’Harlingue, 32, a lecturer at St. Mary’s College who was at the Grand Avenue clinic on Tuesday night, are nervous when they come in for their initial treatments, but have found that the large communal room fosters a sense of calmness and support from other patients.

“I think experiences in doctors’ offices can be really isolating at times, but I liked the communal room a lot,” D’Harlingue said. “It made it a lot more comfortable and I just thought it was a really nice atmosphere.”

The use of one or two larger rooms also enables acupuncturists at the clinic to treat multiple patients at a time without overcrowding the space or pressuring patients to leave after a certain time. Patients are encouraged to leave the needles in for at least 10 minutes, and there is no limit to how long, or how short, a person can stay in the treatment room.

“I encourage everybody to trust their natural intuition for the arc of the experience,” said Jeff Levin, 32, a partner and acupuncturist at both clinics. “You go down to that mellow place and after a while your consciousness kind of percolates up to the surface and you feel a little restless and sometimes that’s really short and sometimes that’s really long.” Most people stay for about 40 to 45 minutes, he said, and the clinic has extra chairs so that if space if needed, people are not asked to leave.

Because patients remain dressed during the treatment, certain spots on the body, such as the stomach and back, are not treated, but that’s part of the beauty behind acupuncture, Levin said. “There are 300 to 400 points [on the body] that you can use,” he said. “It’s like the light is up there but the switch is over there. So you can affect what’s going on with the back by treating the foot.”

Costs are significantly lower at a community clinic. At the Oakland Acupuncture Project, patients can choose to pay any amount between $15-$35, regardless of personal income. They can pay different amounts every time, said McNeilly, and the practitioner does not receive the money until after the patient has left, so that there is no difference in treatments based on cost.

One of the benefits of using the sliding scale payment system is that a wider range of people are able to afford acupuncture services and can afford to keep coming back. “Things we hear a lot are: ‘I’ve wanted to try acupuncture for years and I could never afford it,’ or ‘I don’t have health insurance and I can’t see a doctor and I was so excited to find you because I can finally get some healthcare,’” McNeilly said.

D’Harlingue said the sliding scale enabled him to afford this new treatment option for scarring and skin problems that he has had for many years, which doctors and physicians had said were untreatable. “I’m a lecturer at St. Mary’s College and I don’t get paid a lot,” he said. “But I wanted to see what other options were out there, and the sliding scale is good because it is more affordable for me.”

The clinic’s newest location offers the same treatments as the Laurel Avenue clinic and differs only in its layout of one larger community room with nine recliners, rather than three separate rooms with fewer recliners. “We’re just trying to provide services to more people,” said McNeilly, who added that many of their clients already live in the neighborhood. “Having something that’s more accessible to them is another benefit and will draw in other people who are also near here.” The Grand Avenue clinic is also located in an area with high foot traffic and greater visibility than their other location, she said, which will hopefully attract new clients.

Setting up the new clinic was also very different than setting up the first one, she said, because this time they knew exactly what they needed and had more help. “In the beginning, it was just me and Whitney,” she said. “We did everything. We were the only practitioners and that was fine because we didn’t have a lot of overhead, but now that we have more patients, it’s nice to be able to disseminate some of the work and be able to do more.”

This Sunday the Oakland Acupuncture Project will host a full-day open house at the new clinic to acquaint clients with the new digs and attract new patients. Free acupuncture treatments will be offered from 10 a.m. to 1 p.m., and attendees can mingle and enjoy refreshments and music from 1 p.m. to 5 p.m.