Crusaders of the Strange 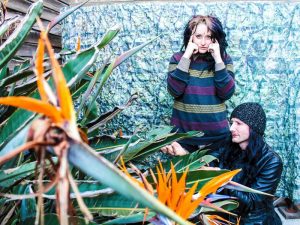 While their music involves rapping, it also includes screaming. Though the band is guided by a punk ethos, its tunes lean more toward trap and hip-hop. There’s manic drumming, à la metal or hardcore, but also heavy doses of bassy, electronic production that sounds a lot like E.B.M. (electronic bass music). At times, you can even hear a bit of dance or pop, which, when combined with screamo vocals, would qualify as crunkcore.

Even Jamey and Volly Blaze, the husband-and-wife team behind Vantana Row, don’t know how to classify their music.

“I’m just doing this because I don’t have any music that I really feel inspired by,” says Volly, who has a face filled with freckles and what appears to be a backwards letter “F” tattooed between her eyebrows. “But it’s hard, because there is no genre like us. And we’ve really been trying to figure out what we are.”

It’s late afternoon on a Thursday, and the Blazes are drinking beers at an East Oakland dive bar called the Aloha Club. We decide to sit on the patio, and our conversation is halted every now and then by passing trains. But the Blazes don’t converse so much as crack jokes and laugh.

Jamey — who has long, curly, bluish-black hair and magenta-tinted lips — is the biggest instigator of this, coming up with clever quips or deadpan one-liners on the fly that, in turn, make Volly erupt into fits of laughter. He equates the droning of an ambulance siren with a beat he heard in a Lupe Fiasco song, and pretends to wax sentimental about his former job as a video editor for weddings, calling it “the best time of my life. Three hours of pure bliss.”

Jamey and Volly met about nine years ago in Antioch when Volly’s sister started hooking up with one of Jamey’s then-bandmates. Shortly into dating, the couple began “writing songs in local parks using [Volly’s] journals and Jamey’s acoustic [guitar],” says Volly, who handles the vocals. (Jamey handles the production.)

Though they’d both been in bands or operated as solo artists, they describe those experiences as “messy,” “dramatic,” or “depressing,” and credit their “chemistry” as one reason why Vantana Row has survived for so long. (Under its current name, the duo has been around since January 2015, and the duo have released more than a dozen albums and EPs on Bandcamp.)

“When Volly and I are together, we make the most uplifting and terrifying music,” Jamey says.

The couple tied the knot in 2016. You can tell they’re married to each other by the black wedding bands they each have tattooed on their ring fingers.

“It’s easy to not lose,” Volly says of the rings, joking about how their decision to merge love and music was “definitely a stupid choice.”

But it’s not like the Blazes are the only husband-and-wife band out there, nor are they only musical couple interested in mashing up genres or freaking people out. South African duo Die Antwoord makes eerie, abrasive electronic tunes that also meld rap and electronic production. And, like Volly, singer YoLandi Visser possesses a unique vocal style that, instead of screaming, sounds like a creepy child whispering.

But after more than a decade of doing the same thing, the Blazes feel like Die Antwoord is starting to lose its edge.

“They make the same beats over and over again,” Jamey says. “They kind of repackage their sound. They’ve hit their peak.”

“Yeah, I wouldn’t listen to any of their new stuff,” Volly adds. “They lost it. They had an epic beginning, but it’s kind of dropped off.”

Fortunately for Vantana Row, remaining interesting and unpredictable is very easy to do. Whether they’re bleeding one song into the next, anthropomorphizing a stuffed panda named Fred and featuring him in music videos, or filming humorous reality TV episodes called Best Of Season 0, Vantana Row is always up to something weird.

Aside from their music, perhaps the most unique thing about them is their van. A white Dodge Ram 3500, it is covered in spray-painted stencils, papermached concert fliers, and plastered photographs, and has served as the couple’s home since 2015. It’s also Vantana Row’s rehearsal space and recording studio, and it gets shoutouts in their songs (like when Volly shrieks, “Like the van life? Maybe not!” in “I’m Sensing a Protagonist” from the band’s latest album 4ourlVer).

Since February, the van has also been a concert venue of sorts for the Blazes. They call them “drive-by shows” and they work like this: Vantana Row pulls up next to the sidewalk, parks the van, and starts playing music while still inside. Jamey sits behind the drums, and Volly wails on the microphone while a camera projects their antics onto a flat-screen computer in the van’s back window, so that pedestrians can watch what’s going on inside. Every now and then, Vantana Row CDs are thrown from a different tinted window. And when they’re done, they simply drive away and find another spot to jam at.

The only tactic behind Vantana Row’s music that they think won’t garner them new fans or (positive) attention is the screamo in their music.

“We understand that, for most people, any music with screaming carries a certain amount of taboo or contempt,” Volly says.

Jamey cushions the screams with melodies and instrumentals to make it more palatable for general audiences, but the Blazes have no plans of nixing the vocal style any time soon.

“There’s something really empowering about a woman screaming,” Volly says. “It’s something that I need to do, because I feel like there’s a lack of it. There’s a lot of girls just going like, ‘Ooh, ooh’ [when they sing]. And that’s cool, but I think that my place is to be yelling.”