Planning daily meals for hundreds of seniors is no easy task. 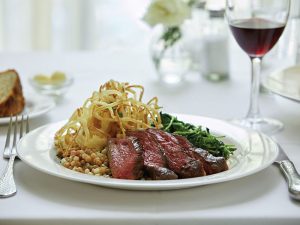 It’s lunchtime at Rhoda Goldman Plaza, an assisted living community in Pacific Heights, and the 45-table dining room is in full swing. Uniformed and name-tagged waiters zig-zag around the L-shaped space, dodging the clientele’s walkers and delivering steaming plates of vegetarian moussaka, slices of baklava, tiny dishes of ice cream, and bowls of “heart smart” broccoli soup. Diners at one table loudly discuss the “state of Judaism today” a few feet away from a couple who are quietly reading the day’s San Francisco Chronicle.

Corey Weiner, the food and beverage director, is a face that everyone at Rhoda Goldman Plaza knows. For the last 17 years, she and chef Kelly Dame — both graduates of the Culinary Institute of America at Greystone in St. Helena — have planned and cooked all the meals for the dining room, and residents know that if they’ve got an issue with the food, these two are the ones to talk to. So it’s no surprise when that is exactly what happens as Weiner trudges through the carpeted dining area on this particular afternoon.

“They didn’t mix it with anything,” a gray-haired man says as Weiner passes his table. He’s eating the smoked whitefish plate with cucumbers, onions, and crackers, which is one of the two main courses on the day’s lunch menu. “I like it this way. Was that an accident?”

Weiner, who by now is used to these off-hand critiques and compliments, patiently explains to the man that no, the way the smoked whitefish was prepared today was “not an accident,” but she’s happy to hear he likes it.

“They mostly don’t mince words,” Weiner says good-naturedly from a table in the back of the room as she picks at a plate of tofu, steamed vegetables, and brown rice.

Cooking and planning meals for 136 people three times each day is no easy task for any chef or culinary director, but it’s an especially difficult task when your clientele is elderly. Not only do food preferences have to be taken into account — most residents at Rhoda Goldman Plaza can’t abide spicy foods, and Weiner says even “a microscopic chip of pepper can be way too much for many of them” — but there are health and dietary restrictions, as well as generational tastes, that need to be factored in, too.

Rhoda Goldman Plaza is a Jewish establishment, so they don’t serve pork or shellfish, and the meats they do serve are all kosher. Because kosher meats are high in sodium, and because salt intake is something many of the residents at Rhoda Goldman Plaza must be frugal with, Weiner says the kitchen staff makes a concerted effort to use less salt when preparing meat dishes. Vegetables and starches, which are generally steamed instead of sauteed or fried, are also served unseasoned and without salt, and even their salad vinaigrettes are available with no salt or fat-free.

Because of physical challenges or handicaps associated with dementia, food texture and consistency is another thing that Weiner and Dame must take into account when planning menus. Most diners prefer “less-firm textures,” Weiner says, though she’s keen to point out that there are still those who “really like to chew, and like a crunch.”

Yet Weiner and Dame still put a priority on creating diverse and varied menus, and at least once a week, you’ll find either an East Asian, Indian, or Thai dish on the menu.

“One of my former bosses said that if you ate at the Ritz-Carlton every day, then you’d get bored. It’s just too much the same,” Weiner says. “So we try to celebrate everything and change it up a lot.”

Though they haven’t had one in a while, Weiner and Dame used to host “Adventure Dinners” for a select 12 to 16 people, with meals from foreign countries whose cuisines may be less familiar still, such as Ethiopia.

“We even did a vegan and raw one,” Weiner says, “which was our least successful. I don’t know why.”

Unlike the staff at other elderly and retirement homes, the kitchen at Rhoda Goldman Plaza makes all meals in-house and cooks most of its own breads and baked goods, like pies, cookies, sourdough bread, challah, pizza doughs, and onion bialy. Residents in the establishment’s “memory-care floor” knead dough every Friday that then gets baked in the kitchen. At one point, Dame even tried to convince the board to let her house goats on the roof, so she could make fresh goat cheese.

The main reason why Rhoda Goldman Plaza is able to serve freshly made fare is because of the smaller size of their establishment. Candiece Milford, the managing director of marketing at Rhoda Goldman Plaza, used to work at The Sequoias, another “life-care community” in the city that houses roughly 355 residents. Because of its larger size, The Sequoias doesn’t have the liberty of cooking meals in-house, serving meals shipped in from food service companies to their residents instead.

“My job is to know my competition and to eat at all of them and taste what they provide,” Milford says. “And food-service companies do a very good job, generally. But you can’t have the handmade, homemade kinds of food that we have here.”

And even though Weiner and Dame are no strangers to complaints about their meal offerings, the amount of positive feedback they receive from residents is so overwhelming that it helps counterbalance the negative.

Between bites of the day’s salad — “sweet and tangy apple-cabbage slaw” — Gloria Lyons, an 87-year-old Holocaust survivor, waxes effusive about the meals she’s been eating at Rhoda Goldman Plaza for the last seven years.

“This is simple, everyday food that is elegantly prepared,” she says, pointing to her lunch with brightly colored orange nails. “Everything is so clean, which I really appreciate, and there’s a good variety of options. And I am not unique in what I’m telling you. Everybody talks about how good the food is here.”

← California Girl Going to a Witch Dance on Halloween →