Five Things I Learned About Love From Charlie Wilson 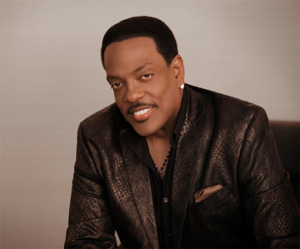 It was the night of Valentine’s Day and I was sitting next to my boo at Oracle Arena watching the Grammy-nominated singer Charlie Wilson. Flanked by four back-up dancers in light-up L.E.D. suits, Wilson had just finished singing the song, “Charlie, Last Name Wilson” and was, for the first time that evening, addressing the audience.

“Fellas, if you’ve got the most beautiful-est girl with you in the world tonight, I want you to stand up,” he said to the crowd.

Practically everyone in the packed venue stood up. Except my guy.

As someone who is both shy and stubborn, I turned to my boo (who is also stubborn, but not shy) and told him it was okay if he didn’t stand up. The woman behind us, however, was not as okay with it and politely nudged him and asked, “Why you not standing up?”

Thankfully, Wilson changed the topic and gave the crowd another command: Turn the flashlight on your phone on and direct it towards the stage. If you’ve been to a show recently, you’ll know that the lighter has now been outplaced by technology. And even though I’m usually one to shun modern advances, in this case, I applaud the change, which is not only safer, but a lot cooler visually.

At Wilson’s Valentine’s Day performance, dubbed Legends of Love, the openers included Tamia and Chaka Kahn, but it was clear, based on the roar from the crowd, that everyone had come to see Uncle Charlie. As expected, there were a lot of middle-aged women in the audience, but also a lot of men. And lots of people wearing red (after all, it was Valentine’s Day).

At 63, the former Gap Band lead vocalist was surprisingly fit and limber, as evidenced by his intricate footwork and sporadic dancing (that even included humping the speakers during one song). Humping aside, Wilson was just as charming and his voice just as warm and buttery as one would expect.

For those who don’t know much about him, he sings old-school R&B slow jams that tend to revolve solely around the subject of love. And, while his songs are catchy, the thing that really draws me (and I assume others) to the singer are his lyrics. Wilson never calls women “bitches” or talks about lewd sexual acts. Rather, he praises the female sex, calling us “queens” and talking about how women put “a big ol’ smile on [his] face.”

“I’m going to make sure that I’m talking good about women all the time and celebrating them,” Wilson said in an interview before the show. “That’s how I roll.”

Wilson also credits his “moral values and the way [he] was raised” for influencing lyrics, as well as wife. Yes, he has a wife. For 21 years, Wilson has been married to Mahin Tat, who was a social worker at the rehabilitation facility where he got clean from a drug addiction in the ‘90s. The fact that they met that way — when Wilson was at his most vulnerable, with a woman in the power position, and at the cusp of his burgeoning solo career — just makes me like the guy more.

On that note, here are five things I learned about love from the man who’s made a living singing about it. Even though the tips are directed towards men, we all could learn a thing or two from Uncle Charlie.

1. Treat your lover like a queen/king every day
“It doesn’t have to be Valentine’s Day — you should love them everyday, all day. Make sure that they have the things that you would give them on Valentine’s Day. Like, every couple of days, just give them some flowers or some candy or some new panties or whatever. It doesn’t have to be every week, just be kind to your girl [or guy], and let them know that you love them for real. That’s how I look at it.”

2. Getting help/input from your lover is not emasculating
Unsurprisingly, Wilson’s wife, Mahin Tat, plays a big role in his sound. Tat is always present at his recording sessions and will frequently interrupt to change the wording of a song or amend Wilson’s delivery. “All the producers will be looking at me like, ‘Wow, she got this dude controlled,’” he said. “But it’s always fun when she’s in the studio with me because she brings up a lot of important points.”

3. Somebody who’s there for you at your lowest is worth keeping
“When you meet somebody that’s in your corner and they come full circle for you and help you turn things around, you have to love that person. I mean, come on,” Wilson said in reference to his wife, Tat, who was a social worker at the rehab facility where he was getting clean. “That person gave up their whole life just to make sure you got back on your feet. That’s the person that you can practice love on.”

4. Birthdays are important
Tat’s birthday is on Feb. 11 and both she and Wilson are usually on the road touring during that time. Regardless, Wilson makes a point to do something special for her and he’s especially keen on making it a surprise. “It’s hard to do surprise things with her because she’s right there with me every moment,” he said. “I’ve tricked her a lot of times though. I definitely have other people doing stuff and she doesn’t know what’s going on.”

5. It’s not unmanly to praise a woman
“I think these guys think that they’ll lose their manhood if they start praising women. I think they’ve got that hard thing about them, and they’re like, ‘Why are you taking the pimp out of the game, Uncle Charlie?’ And I’m like, ‘I’m not taking the pimp out of the game. You’ve just got to watch what you’re saying and be a little more careful about how you guys are treating the women out here.’”

← Meet ABRA, The Darkwave Duchess Fuck Valentine's Day: 10 Anti-Love, Pro-Single Songs to Get You Through The Holiday →