–Published in The Los Angeles Times style section on September 3, 2010– 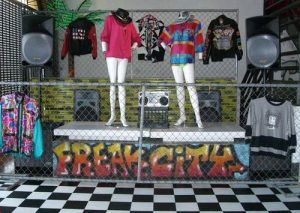 “This is a big deal,” said co-owner Justin Romero. “Normally our store is open by appointment only or during our nighttime parties. Now it will be open to everyone.”

Freak City, which opened in October 2009, has gained notoriety in the underground music and art scene for its spontaneous, late-night parties, which have featured such artists as MIA, Peaches and the Cool Kids. The no-frills two-story venue consists of a number of empty rooms for dancing, a lounge, a stage, a bar, a break-dancing room, a record studio and a clothing gallery. Crumpled up newspaper, confetti and graffiti cover the floors and walls, and odd props such as traffic signs, a bus bench, a basketball hoop, metal piping and sewage grills give Freak City an urban street-style vibe.

The pop-up clothing store, which will be open every day from 2 to 10 p.m. for the next two weeks, will feature clothing from vintage collectors and local designers, as well as Freak City’s own vintage collection and its hip-hop apparel line, LA Wrap. The selection is unisex with a heavy influence of ’80s and ’90s street-inspired clothing, such as floral dresses, harem pants, retro Adidas sweatshirts, jelly shoes, snap back hats, and patterned leggings.

“Think of it like an indoor flea market on the streets of New York,” Romero said.

Throughout the sale, DJs will spin music and complimentary drinks will be served. Shoppers can try on clothing in a vintage British phone booth set up as a dressing room.

On Tuesday evenings from 7 to 10 p.m. Dante’s Fried Chicken food truck will be parked outside, serving up mouth-watering dishes such as the famous Sock It to Me Fried Chicken (or tofu) and coconut macaroni and cheese.

“If you want something unique and authentic, come here,” Romero said. “Freak City is all about doing things that no one has done before and selling styles that you can’t find anywhere else.”

The pop-up store will be open seven days a week from 2 to 10 p.m. for the next two weeks (and possibly longer). Occasional late-night parties and musical performances will be held after each event. Cash only, but there is an ATM machine on site. Clothing ranges from $5 to $100.