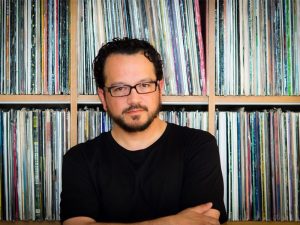 On Twitter, musician and DJ Mark Farina recently posted a photo of two song waveforms. Over one that looked like a solid bar, Farina wrote, “I prefer this…” Above the other — a segmented line with uneven heights — he wrote, “…more than this.”

The first waveform is representative of music with an even tempo and steady instrumentals, a style of producing that Farina has championed and emulated since 1989. But it’s the second waveform that is most in line with today’s musical tastes. Most dance songs played on the radio or in clubs posses similar peak-valley-peak structures that denote buildups and drops — common ploys used by EDM acts like the Chainsmokers.

But Farina couldn’t care less. For close to three decades, he’s made a career pushing smooth, adroitly produced Chicago house and a blend of downtempo and hip-hop he calls “mushroom jazz.” He says he’d rather his tunes “have a groove that goes on,” than consist of erratic transitions or interruptions — even if doing so diminishes their chances of charting on Billboard.

“If what I do gets popular, so be it,” he says. “But I’m going to keep doing what I do whether or not it gets any more received beyond the underground.”

Farina grew up in Chicago in the ’80s and was exposed to Detroit acid house and experimental industrial music through Wax Trax! Records at a young age. A drummer, Farina joined myriad cover bands as a teenager and became the first student in his high school to own a Yamaha drum machine. He began making his own compositions soon after, adding an early Korg synthesizer to his collection.

“I learned early on that you can make electronic instruments do cool stuff on their own without having to have an in-depth musical knowledge to do it,” he says.

Farina started DJing local club nights in Chicago and released Mushroom Jazz, his first mixtape in an ongoing series comprised of laidback, mostly instrumental tunes from various artists and beatmakers. The name and sound of “mushroom jazz” was inspired by the mid-’80s British club subgenre “acid jazz,” which had qualities Farina both resented and wanted to emulate.

“Acid jazz was too light and floaty for me,” he says. “I liked the melodies, but it sounded like old funk, redone. With mushroom jazz, I took the bass back end of hip-hop and mixed it with jazz.”

When Farina moved to San Francisco in 1993, he started playing mushroom jazz on Monday nights at the SoMa nightclub Oasis, and was surprised to find that “unlike in Chicago, San Francisco people didn’t mind dancing to slower tempos.”

For six years, Farina DJed at Oasis, churning out Mushroom Jazz compilations on the side. Though originally released as cassettes, vinyls, and CDs, Mushroom Jazz went digital around its sixth release. (It’s currently on its ninth iteration.) As his fan base grew, so too did Farina’s production costs, and it wasn’t long before he was selling upward of 500 units per record.

In the early days of Mushroom Jazz, Farina was more hands-off and trepidatious when dealing with the artists whose songs he was using.

“I didn’t really know any of them, so I’d just take the tracks as they were,” he says.

As the volumes progressed, Farina got to know the artists on a more personal level, which emboldened him to start making suggestions like, “Can you extend this or leave this part out?”

Now, Farina — who has worked with San Francisco house producer and DJ Miguel Migs, East Coast producer Pete Rock of Pete Rock & CL Smooth, Jurassic 5 emcee Chali 2na, and Los Angeles hip-hop group People Under the Stairs — is more involved in tweaking the specifics of each song, describing what he does as “re-editing,” compared to “sort of taking records I liked and licensing them.”

Recently, after more than 20 years of living in San Francisco, Farina relocated to Dallas to be closer to his family, “try something different,” and save a bit of money.

“I still love the city and all,” he says, “but obviously, many things have changed.”

Rebuilding one’s name and brand in a new city is a challenge for any artist, but it will probably be less so for Farina. Not only did he create his own subgenre, but he’s also a house DJ, meaning he spins more than just relaxing fusion tunes.

In the past, he has DJed multiple rooms at venues, playing mushroom jazz in one and house in the other. He also segments his sets by subgenre, often opting for mushroom jazz early in the night and dance music later. (“It’s a good ploy to get people to come out earlier,” he says.)

He’s already booked one gig at an East Dallas dance club called It’ll Do, and he’s hopeful that his dual skillset will lead to more opportunities.

“Having two genres to play is a unique element that gives me a lot of musical freedom,” Farina says. “There’s 24 hours in a day, and sometimes time frames call for music other than just four-to-the-floor house.”

← Oddisee Has All The Answers The Music Industry Hates Trump →