How an L.A. block became analog alley, a destination for all things retro Most of the time, when people talk about Sawtelle Boulevard, they mention the Japanophile stretch near Olympic, known as Little Osaka, where you can buy authentic red bean mochi, Sanrio knickknacks and mouthwatering ramen. (The general area around the stretch is now technically known as Sawtelle Japantown). But if you walk a few blocks north of that stretch, toward Santa Monica Boulevard, you’ll discover Analog Alley.

It’s where the eight-decade-old Nuart Theatre shows indie and cult films and where you can rent videos from one of the last independently owned video stores in the city. You’ll find a record store with a hammock hanging out front and a used bookstore with a tintype photography studio. Down the side street of Idaho Avenue, there’s another used bookstore, this one filled with gewgaws and doo-dads from yore. If you want a slice of the past, this is where you go. 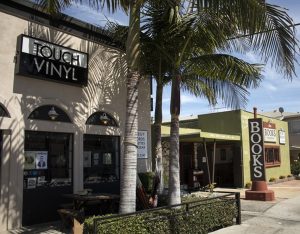 Two or three years ago, recalls Sebastian Mathews, the owner of Touch Vinyl and Cinefile Video, “there’s these little obsolete businesses around and we were all starting to feel that analog needs to come to the forefront.” As a result, local shopkeepers decided to brand the area Analog Alley, and since then, foot traffic and business in general have improved. 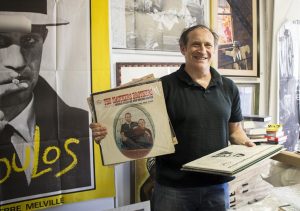 The businesses in Analog Alley have been around for years. The Nuart has been there since the 1930s and Alias Books since 1959. Cinefile Video popped up in 1999. Touch Vinyl and Sideshow Rare and Remarkable Books set up shop in the mid-2000s, in part because the other three businesses were already there. In 2012, Cinefile Video was on the brink of closing, until the owner of the record store stepped in. “I said, ‘We really don’t want to lose it from the block,’ ” says Mathews, who originally just owned Touch but ended up buying Cinefile. “It’s a big piece of what makes [Analog Alley] work.” 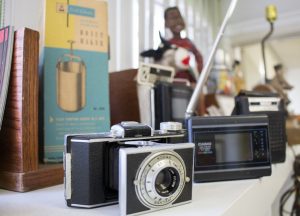 Most of the shopkeepers on the block agree that there’s strength in numbers. “There’s a really interesting synergy between what happens from store to store,” says the owner of Sideshow Books, Tony Jacobs, who coordinates his book displays with what’s currently playing at the movie theater. “The neighborhood shares its customers and it also inspires its customers from one place to another.” 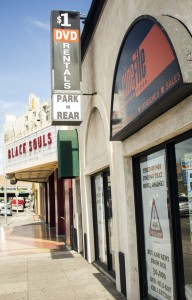 On a recent Wednesday afternoon, after renting a DVD from Cinefile, a man made a stop next door at Touch Vinyl to buy a record for his son. Meanwhile, a bibliophile wandered from one used bookstore to the next. “It’s like going to Target or Wal-Mart, but you’re supporting multiple businesses,” says Ginger Buswell, an employee at Alias Books. Shopkeepers see Analog Alley as more than just a kitsch enclave. Their businesses, they believe, pay homage to a simpler time and promote a slower lifestyle. “It’s about keeping yourself present in your experience,” says Jacobs, who sells, in addition to old books, found photographs, vintage matchbooks, and 16 mm films. “It’s the idea of hanging around and taking your time with something.” Even the hookah lounge on the block is an example of slow consumption. Looking forward, shopkeepers hope that the ethos of Analog Alley is more than just a passing fad. They’d like to see a bar or café open on the block or another analog business. But as much as they want to expand, they worry about what will happen if the area becomes too popular. Just down the block in Little Osaka, where rents are high and space is scarce, they see businesses come and go. And, as development creeps further north, shopkeepers worry that the future is just around the corner.

← Son Of A Cocaine Dealer, Rapper Bricc Baby Lives Up To His Name Tokimonsta Mixes Hip-Hop and EDM For The EDC Masses →

END_OF_DOCUMENT_TOKEN_TO_BE_REPLACED

How Robin Leach, for the sake of charity, spent more than he expected on art his granddaughter could have made. OK Whatever Britney Spears is painting on the veranda of a very large, ivy-covered house. Grecian columns and a tiered fountain buttressed with hedges loom...