Inside the Mind of a Slumerican

Alabama rapper Yelawolf reveals his true feelings about women — or, as he calls them, “bitches.” 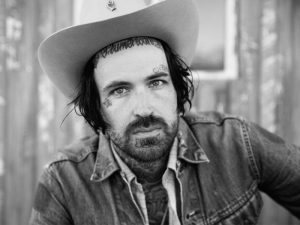 Had Hillary Clinton won the election, this article would have been different. But she didn’t, and Donald Trump did — and now I can’t look at a number of things, including the Southern rapper Yelawolf, in the same way.

The 36-year-old Alabaman emerged onto the music scene around 2005, when he put out his first independent album, Creek Water, an electronic hip-hop record laced with Southern and psychedelic flourishes. At that point in his career, the now almost fully tattooed artist had but a few inkings on his skin, including the word “Slumerican” on the back of his calf, which he’d had done in 2002.

Today, Slumerican is far more than just a fading image on the rapper’s leg: It’s the URL for his website, the name of a song he collaborated on with Killer Mike, an Instagram handle, a Facebook page, an entry in Urban Dictionary, a Tumblr profile, a record label, a soon-to-be weed strain, and Yelawolf’s namesake.

“It started just as a play on words, to be an American from the slums, like mud tires on a big truck with a Dixie flag, with white boys from the backwoods — but they’re bumping Biggie Smalls,” he says, adding that pretty soon, there will be a Slumerican store, barbershop, and tattoo parlor.

If the word rubs you the wrong way, you’re not alone. Though Yelawolf claims it is “an all-inclusive culture and brand,” I can’t help but think of the people that it represents: namely, Trump supporters. After all, wasn’t it White, rural voters who helped The Donald on his road to victory? And wasn’t it Yelawolf — who last year defended the use and wearing of the Confederate flag on Facebook — who said in a 2011 interview with The Guardian, “I represent the people who are the core of America”?

Lest you think Yelawolf voted for Trump, he didn’t. He didn’t vote at all. In fact, he didn’t even watch the election, let alone make an effort to find out who won. He only learned of the results after his mom called him and told him the next morning.

In true Slumerican fashion, Yelawolf has not cast a vote for at least the last three presidential elections. Though he claims he was “an advocate” for Barack Obama and that 2008 was “the only time I ever became active,” Yelawolf couldn’t vote for him because he “didn’t have an I.D.” He made up for it, though, by “telling people to vote, vote, vote, vote.”

This year, it wasn’t clear whether or not Yelawolf was registered to vote. But it didn’t matter anyway, he says, because “I just didn’t give a fuck.” Asked why he he didn’t care, he responded, “None of those two people represent me at all. I can’t relate.”

Throughout most of Yelawolf’s career, whether he realizes it or not, he’s had a fraught relationship with women. Though he claims that “most of the influential people in my life have been women,” and that “all the women that’s been in my life — my wife, my fiancée, my daughter — started to influence my music,” little in his career indicates that this is so.

Only one of his studio album features collaborations with female artists (though Yelawolf assures me that Wynonna Judd will make an appearance on his upcoming 2017 album). When and if his songs reference women, it’s usually in derogatory terms or in manipulative scenarios, such as the plot of his 2010 hit “Daddy’s Lambo,” wherein he tries to convince a girl to let him drive her father’s car without any consideration of the possible repercussions.

At the end of “Throw Up It,” the third track off his 2011 album, Radioactive,things get even more complicated. The piano-laced, Gangsta Boo- and Eminem-featured track ends with a telephone skit between Eminem — to whose label, Shady Records, Yelawolf is signed — and the Slumerican rapper. It goes like this:

Eminem: “Yo, you know what I was thinking, man? I think the one thing the album don’t have that it might be missing is a song for like, for girls.”

Yelawolf: “Ummm, what do you mean? For, like, bitches?”

Though most likely a staged conversation, this “chat” so far hasn’t led to many changes in Yelawolf’s music. His next album, 2015’s Love Story, makes no references to women, and don’t let the album title fool you either. The record’s title track may have the lines “Don’t forget me / I love you so” in the hook, but they are referencing Yelawolf’s career and legacy as a rapper, not a woman.

When I bring this up to Yelawolf, he steers me in the direction of his October mixtape, Hotel, which he claims “out of seven tracks, six are about girls.” I give the record a listen and realize that Yelawolf is wrong. Only three of the seven tracks reference women, and they do so in a fleeting, dismissive way that is, admittedly, characteristic of a lot of rap music, but surprising given that Yelawolf seems to be proud of these songs. “You Should Have Known” is a message to a girl he dated who should have known he’d “leave you with a broken heart / I’m a ramblin’ man, I’m a son of a bitch from the start.” “Good Love,” perhaps the sweetest of the three, graphically depicts Yelawolf’s interactions with a girl whom he invites to his hotel room. And “In Love Tonight,” which is not even one minute long, has a split-second mention of a girl who’s “only 25, she’s a rebel in disguise / And I wanna play.”

Newly single, Yelawolf had a previous relationship that lasted five years, and though he had nothing outright negative to say about his ex, he did manage to subtly blame her for thwarting his acting career, which he plans to return to in the next year starting with his role in the film The Peanut Butter Falcon.

Speaking of next year, Yelawolf will be taking time off from touring to open up his barber shop, tattoo parlor, and custom furniture-and-handbags store in Nashville, with plans to open a private club of sorts on the upper floor. When I ask him what kind, we have the following exchange:

Yelawolf: “A speakeasy upstairs where we’re going to get our Hugh Hefner on.”

Jessie: “Yeah, so that sounds like a boys’ club to me.”

J: “It just seems like you’ll be viewing and talking about women in a way that I probably wouldn’t agree with.”

J: “He’s cool, yeah, but he just sees women for their body parts.”

Y: “Well, my mom will be the door lady, and then we’ll see what everybody says then.”

Baffled by this last remark, I decide to end our conversation. It’s clear that I’m not going to get a straight answer from him, and I’m not sure that I want to.

← The Metamorphosis of a Rapper Another One Bites the Dust … Sorta →