It’s Not Easy Being Shura: An Introduction to the UK’s Latest Avant Pop Singer 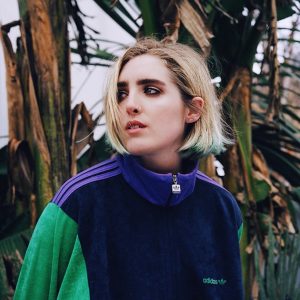 Shura is a 24-year-old experimental pop singer from Manchester who makes dance music — but hates dancing. She’s a vocalist who doesn’t like the sound of her own voice. A musician who has anxiety performing in front of others. And an artist who’s about to go on her first U.S. tour, but hates flying.

In other words, it’s hard being Shura.

And also fucking awesome. In a little over a year, Shura, whose real name is Aleksandra Denton, has climbed out of SoundCloud obscurity and become one of the most promising up-and-coming crooners to hit the scene. Her first self-directed music video for the electronic-synth breakup song “Touch” went viral in 2014, and her singles have been played over three million times on Spotify. In a matter of months she went from “working full-time and making music whenever I had the time” to being a full-time musician, signed to a record label (Universal Music Publishing Group), with funding and resources at the ready to produce her first album. This summer, she released a 10-minute “performance film,” called Three Years, as well as her first EP, White Light, and she has plans to drop her debut album soon.

But when I spoke to Shura the other day, she sounded more than a bit anxious. “I’m so scared that everyone’s going to suddenly turn around and say, ‘You know what? This Shura is actually shit,’ ” she says, after admitting that she experienced her first panic attack earlier this year. “You just feel like you’re going to be found out. That you’re a fraud.”

I’m no psychologist but if I had to diagnose her with something, I’d say she was suffering from the imposter syndrome, a term for people who can’t accept their accomplishments and instead chalk them up to luck or mistakes. Shura doesn’t deny this (“I guess I do suffer from that,” she says), but she also doesn’t think it’s entirely a bad thing. “Maybe that’s why I keep doing so much stuff,” she muses. “It’s what keeps my standards so high.”

Shura has always been self-critical and overly introspective. Though her most recent songs have focused predominately on relationships, break-ups, and unrequited love, her early work, dating back to her teenage years, was emo and angsty. She describes it as “pop punk” inspired by Avril Lavigne and the “my life is shit” pathos that the Canadian icon propagated. Her father taught her how to play the guitar, and by 16 she was performing at open mic nights in pubs around Manchester. She formed a band while in college, but it wasn’t until last year at the Pitchfork Music Festival Paris opening party that she had her first big-time performance. “I just totally freaked out,” she says. “It was the scariest opening gig ever.”

Though she thought she was “going to die,” she didn’t, and since then, she’s become a bit more comfortable with playing live. Shura is also learning to be more accepting of her voice, which she “doesn’t really like listening to,” despite the fact that it has been compared to Madonna’s circa The Immaculate Collection. “I don’t hate my voice,” she explains. “I’m just not an Adele.” To cope with her non-Adele voice, Shura has taken a Grimes-inspired approach to mixing by burying her vocals beneath her instrumentals. Surprisingly, this low-fi trick works well in her songs, giving them an ethereal, gauzy quality that would otherwise be lost in the up-tempo, late’-80s techno beats that she so often uses.

Her debut album, which is “kind of 80 to 90 percent done,” will be more biographical and retrospective than her work to date. A lot of the songs focus on her family and childhood and will include audio samples culled from the 50 or so home videos she watched while putting the album together. The nostalgia factor was largely influenced by the film Interstellar, which “freaked [her] out about time and death and family.” The resulting album, which she co-produced, will be something that she says, “feels absolutely that it could only have come from me.” Which, when you think about it, is pretty fitting for a debut.

On Nov. 9 she’ll be making her second trip to San Francisco (or “San Fran” as she calls it) to headline a show at The Independent. When she came in July to play at The Rickshaw Stop, she almost missed her set due to a pre-show nap and a poorly set alarm. (It was set for 10 a.m. not 10 p.m.) She ended up getting dressed “in probably 30 seconds” and “running through the Tenderloin like a mad woman,” desperately trying not to miss her first gig in the Bay Area. Luckily, she made it on time. Here’s hoping she doesn’t miss this performance.