Love Mixtapes? Like Vinyl? This Company Combines Them Both 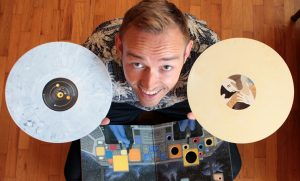 Sometime in early September, a few hundred people around the world received in the mail a flat, cardboard box containing a heavily padded, highly anticipated vinyl record. Ostensibly, those same few hundred people slipped the record out of its astral-themed jacket and then placed it under the needle of their record player.

Assuming they started with side A, they would have listened to the opening track, “Control,” an upbeat dance-pop tune by the Sydney band Olympic Ayres. Had they started with the other side, they would have heard a moodier, piano-laced ballad called “Baptize” from a Los Angeles band named RKCB. Because therein lies the beauty of this vinyl release: It’s a mixtape, not an album.

Called Vinyl Moon, the nascent, Los Angeles–based endeavor is a subscription-based vinyl mixtape series, featuring a new 10-track release mailed out every month. Each curated release consists of songs from relatively obscure and unknown indie artists and bands. In addition to the records, each volume comes with stickers and postcards, and each record jacket is decorated with original, custom artwork from different artists.

As Brandon Bogajewicz, the creator of Vinyl Moon, explains in an interview at his home office in West Los Angeles, “You’ve got to convince people to go vinyl over streaming, and what [the artwork and packaging] is saying is, ‘We made this for you.’ To capture our audience, we have to make it feel special.”

The idea for Vinyl Moon came to Bogajewicz in the summer of 2014, while listening to 7-inch records from some of his favorite burgeoning bands. Though he likes to support bands by buying their albums and EPs, listening to a 7-inch vinyl, which can only hold about two songs per side, was downright annoying. “It was so frustrating,” he says. “It was like, ‘Great, I love that you guys made a song, but I would like to sit down for longer than 3½ minutes.’”

A “light bulb” moment ensued, in which Bogajewicz realized that he could be the guy to solve this problem. “I wished somebody would just take all these 7-inches from upcoming bands and put them into a full-length record,” he says. “And usually when you think, ‘I wish somebody would do something,’ it’s not stuff that you can actually do. But I was like, ‘Hey, I actually might be one of the better people to do that.’”

Not only did Bogajewicz have experience working with both bands and labels but he also had what he called “a pretty good trust certificate” through his music website, the Burning Ear, which would give him another outlet for promoting the bands (who, so far, don’t get any licensing royalties for letting Vinyl Moon use their songs). Plus, this was not Bogajewicz’s first time making mixtapes. As a student at Venice High School, he compiled, recorded and decorated his first mixtape in 1997: a punk- and ska-heavy cassette tape called Zev, the Cry of the Wolf, which was “all about the bands you know but the songs you don’t.” Zev was followed by Come On Everyone: 29 Ska-Licious Tracks in 1998 and The Watermelon Collection the year after.

“I spent so many years of my life trying to figure out what I wanted to do and to eventually settle on an idea and realize it’s just an idea I had in high school was kind of gratifying and validating,” Bogajewicz says. “It was this all along. It just took me a long time to realize it.”

In May of this year, Bogajewicz created a Kickstarter campaign to fund Vinyl Moon. In the span of a month, the project earned $8,500 more than the $10,000 goal, and volumes 1, 2 and 3 sold out. With each monthly release, the number of subscribers has grown; about 700 people will be receiving volume 3 in the mail in November.

Though each volume has a different theme or mood (volume 3 is more mellow; volume 4, says Bogajewicz, will be half dance-pop, half rock and guitar), pretty much every song, band or artist can be prefaced with the word “indie.” In fact, according to Vinyl Moon’s Kickstarter page, the only genres you’re not going to hear on a Vinyl Moon release are metal or country.

Bogajewicz believes there are a lot of different factors that will draw people to subscribe to Vinyl Moon. There will be those who like discovering new music from fledgling bands, as well as those who simply like the idea of getting something in the mail each month. Others might have a penchant for mixtapes or limited-edition vinyl, or an abhorrence for using the Internet to find and play music. Regardless, the one thing uniting all of Vinyl Moon’s subscribers is probably their love and appreciation for analog music.

“You’re not hitting shuffle, you’re not adjusting the volume and you’re not checking your email,” Bogajewicz says. “It’s a different way of consuming music. You can truly digest it for yourself without having it be part of some hyperbolic BuzzFeed headline.”

← Skeme Stays True to his Inglewood Roots -- Except When He's Ghostwriting Other People's Hits PREMIERE: GET DARK WITH RAIDER KLAN’S AMBER LONDON ON ‘LIFE II DEATH’ →