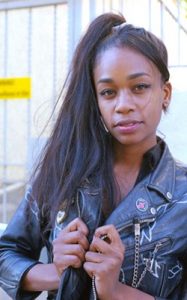 Success has its caveats. Once an artist makes it big, there’s a certain visceral quality to the music that gets lost. The do-it-yourself, succeed-or-perish ethos that helped make the artist becomes irrelevant once they’re signed. The hunger vanishes. The yearning dissipates. And while the music itself might get better, there’s no denying that a shift has taken place.

Fortunately, that shift — or loss, if you will — does not yet apply to the R&B songstress ABRA. Though she is signed to Awful Records, the label started by Atlanta’s hip-hop darling of the moment, Father, her music is still genuine.

She still writes all her own lyrics and creates all her own beats, and her “studio” is still the walk-in closet of her bedroom in her parents’ house. She still records every song from an awkward, “super painful” kneeling position on the floor, and her “desk” is still an overturned clothes hamper. In other words, her music might not be as clean and polished or scrubbed down and reduced as it could be, but then again, that’s kind of the point. (And you’ll have a chance to hear her prove this point at the Feels IV party thrown by Wine and Bowties on Nov. 28 in Oakland).

“I don’t care about having really lofty production: Good music is good music,” says ABRA, whose name is pronounced like the first half of “abracadabra.” “One of my goals is to help people realize that you don’t have to be this amazing producer or amazing singer just to put music out.”

Take, for instance, her most recent addition to SoundCloud, a song called “Sick Girl.” The glitchy, low-fi track was recorded on a bleary September morning while ABRA was suffering from a “really bad cold” and “hella mucus.” As a result, the vocals are nasally and muffled. But rather then rerecord it once she got better, ABRA decided to keep the original. Though it sounds more rough, it also sounds less contrived, she says. Plus, by not rerecording the vocals, the song took on a double entendre. “Sick Girl” not only refers to having a crush on someone (“I don’t know if they say this in San Francisco, but in Atlanta, we’re like, ‘Damn, I’m sick over this person. This person got me sick'”), but it also refers — literally — to the state she was in when she recorded it. The song is perfect in its imperfection, which is exactly what fans have come to love and expect from her. And that formula seems to be working. Case in point: In the week or so since the song was posted to SoundCloud, it has already been listened to more than 45,000 times.

ABRA’s music tends to favor low bass lines and distortions, which pair well with her high-pitched, slightly whiny voice. Her songs cover a melange of topics, from friendship and break-ups, to mistakes and lessons learned, and many of them are culled from experiences in her own life. She’s released two mixtapes: Blq Velvet in January of this year, and Rose, five months later. She has almost 20,000 followers on SoundCloud (compared to less than 500 the previous year), and her songs gross an average of 80,000 plays. She’s gone on tour, both as a solo artist and with Father, and there are rumors that even Drake has listened to her music.

But ABRA, who declined to divulge her real name and age, didn’t always want to be a singer. She grew up in Atlanta by way of London and, for many years, wanted to be either a photojournalist or an actress. She started playing guitar and writing poetry at age 14, but she “never put the two together,” she says. It was a few years later at an audition for her high school musical that she learned she could sing. Though she’d never (and still hasn’t) taken a voice class, the teacher was so impressed with her vocal skills that she gave her a role in the next two school plays. Still, it wasn’t until ABRA had graduated high school that she started to actually become interested in the notion of singing. Her boyfriend at the time owned a Mac computer and introduced her to the software program Garage Band. She started fooling around with it, creating beats to sing over and looping samples of her voice to sound like harmonies. She realized that though she enjoyed singing, it was the combination of producing and singing that really got her excited.

She signed to Awful Records in the summer of 2014, although she says she’d known Father and his contemporaries for years because they all went to the same college (Georgia State). Father learned that she could sing through her YouTube guitar covers of rap songs, and, from there, they started slowly working together. First, she invited him to a music video filming, then he invited her to a photo shoot, and eventually, they started collaborating and doing live shows together.

But performing alongside a roster of rappers known for party-inducing, upbeat club bangers was no easy task. At least not at first. ABRA, who was oftentimes the only singer on stage, would be sandwiched between rap sets and had to figure out how to keep the already “turnt up” crowd turnt through her singing. “It was really intimidating and gave me a lot of anxiety at the time,” she says. “There would be all these people there who came to hear rap and I worried that they’d hear my music and be like, ‘What is this?’ ”

Luckily, her fears were unsubstantiated. Crowds loved her. In the last year, she’s carved her own place in the crew and become a fixture of sorts. Though she can’t take the title of first female to sign to Awful (that commendation goes to Lord Narf), she was still the group’s first singer. Or, as she puts it, the group’s first and only “Darkwave Duchess.”

← It's Not Easy Being Shura: An Introduction to the UK's Latest Avant Pop Singer Five Things I Learned About Love From Charlie Wilson →