Oddisee Has All The Answers

The D.C. rapper has perfected the art of speaking his mind without sounding moralizing. 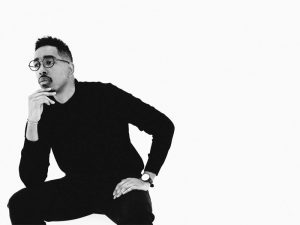 Fans who chat with Oddisee — a D.C. rapper who likes to sit at the merch table after finishing shows — often critique his set list or tell him about their favorite songs.

But instead of dispensing unsolicited advice, fans should be asking Oddisee for answers. Because he seems to have a lot of them.

For a decade, the 32-year-old has been making music, churning out two dozen albums, mixtapes, and EPs in that time. Though he started out living in his mother’s basement, he hasn’t had a nine-to-five job since 2004, and he’s been able to afford living in Brooklyn for the past seven years. His quick rhyming and acerbic observations of urban and Black life in 21st-century America have won him legions of fans beyond the DMV, and his instrumental-only albums — like 2016’s The Odd Tape — have earned him street credit as a beatmaker. He’s also married with a child on the way, and owns some real estate.

Oddisee clearly has his shit together, a blessing that he believes is possible because he “think[s] a lot more than [he] should.”

“I’m constantly observing and cataloguing and storing things in my brain,” he says. “If I really divulged my thoughts on everything, I think I’d make a lot of people feel uncomfortable and awkward.”

In “Want To Be,” a simplistic horn and guitar number from his February album The Iceberg, Oddisee touches on this, intoning, “And the time I’ve wasted, trying to fit in norms / People like me more when I pretend I’m basic.”

Throughout The Iceberg, listeners get glimpses of the emcee’s life and views on the world. In the bouncy synth track “Hold It Back,” Oddisee acknowledges the existence of sexism in today’s society with comments about his sister: “I make more than my sister / ‘Cause I was born as a mister / And I ain’t never been to college, and she graduated honors / Yet the bosses think that I’m a better fit.” He uses a story about his childhood best friend, who was white, to muse about the roots of police brutality and terrorism, in “You Grew Up.” People’s biases and inability to recognize inequality or racism are the focus of “Like Really,” a ricocheting song filled with rhetorical questions like “How do you police the streets of a neighborhood you do not engage in?” and “Why a brother get three for a sack while your brother go free for a raping?”

With his whip-fast vocals — Oddisee can spit just as quickly as chopper rap legends Twista and Busta Rhymes — it’s hard to realize you’re not hearing cussing, slang, or derogatory statements about women in his music. Also missing in his songs are drug references, and laments about wanting to save strippers.

“I do my best to deliver music without people realizing that those things are absent,” Oddisee says. “You never want to come across as self-righteous or preachy.”

Another thing Oddisee doesn’t want is to be associated with “conscious rap.” (Even Talib Kweli, one of the most socially and politically vocal emcees, has a problem with the term, and has said, “The title is limiting.”)

“I don’t like the term ‘conscious’ because that means if you’re not considered conscious, you’re unconscious,” Oddisee says. “I think everyone is conscious. They’re just conscious of different things.”

The rapper has avoided being placed in a box by developing other musical strengths. Many of his albums are filled with a combination of live instrumentation and electronic production, ranging in style from jazzy and old-school to stripped-down or dance-y. He’s also one-third of the Diamond District, a D.C. crew known for its ’90s-era East Coast rap, and has a bunch of atmospheric, chill, beats-only albums.

“I’ve built a career understanding that I have to cater to the general audience and not specific individuals,” he says. “I’m not simply in love with it because I’m responsible for creating it.”