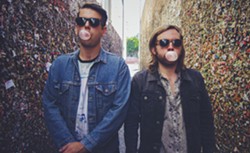 Midi Matilda was in a pickle.

The electronic-pop duo — consisting of drummer Logan Grimé and multi-instrumentalist and singer Skyler Kilborn — had dozens of three-foot-by-two-foot band posters printed on newsprint, but they had no idea what to do with them.

They originally planned on plastering them around San Francisco as a means of advertising their upcoming show at The Independent on Friday, July 8. But after doing some research, the Oakland band nixed the idea. “We didn’t want The Independent to get in trouble,” Kilborn says. (Though San Francisco allows the public to post signs on public property, municipal regulations limit what is allowed, such as poster size and the number of days that a flier is allowed to be up.)

So the pair came up with another idea. Using Facebook Live, the platform’s recently launched live-streaming feature, they filmed themselves driving around, announcing to viewers in San Francisco that they would hand-deliver a stack of posters to anyone who messaged them an address.

Replies started pouring in, and they had time to drop off posters to fans in the Sunset and “somewhere off of Van Ness Avenue” in the hour or so before our interview.

“It was a fun little adventure,” Grimé says. “When we’d drive there, we’d give them a hug, and they’d be like, ‘Have a good show! Good luck with the interview!’ It felt like we knew them already.”

We’re sitting at a wooden table on the mezzanine level of Sightglass Coffee in SoMa when Grimé and Kilborn tell this story. They’re both visibly excited as they recall their adventure, though they wish they’d been able to visit more fans. Midi Matilda is in the midst of planning its comeback.

It’s been four years since the release of “Day Dreams,” the band’s rollicking, piano-laced debut single that was wildly successful in the indie blogosphere. More than 80 websites worldwide posted the track, and within a couple of days, the musicians had secured a manager, an agent, a lawyer, and a sold-out show at Cafe Du Nord (before it underwent renovations and new ownership).

Midi Matilda kept the momentum going with the EP Red Light District, which led to a Q&A with the Huffington Post and a record deal with the label Five Seven Music, which re-released the EP in 2013 and sent the band on two nationwide tours.

But after 2013, there was radio silence from Midi Matilda.

“Things slowed down for us a little bit,” Kilborn adds.

Part of this was because the band was busy writing songs and creating new material, but the other reason was that they weren’t getting along with their label.

“We wanted to put out certain music and we weren’t seeing eye-to-eye,” Grimé says.

To make matters worse, their manager, Steve Brodsky, passed away from acute leukemia a year into their contract with Five Seven Music.

“He was our connection to the label,” Kilborn says. “He was the voice that spoke for us, but then suddenly it was left up to us to do it on our own.”

After two years, Midi Matilda was able to leave the label. Though they’d lost much of the attention garnered from the release of their debut single and EP, the duo feels fortunate to be independent again.

“We’re lucky that it wasn’t worse,” Kilborn says. “There’s bands that get held back indefinitely because of their record contracts.”

Their goal now is to pick up where they left off in 2012 and grow from there. They’ve already played one show at Neck Of The Woods, and since April they’ve released a new track each month. The band also has a lot of older material created during their time with Five Seven Music that they feel they must share in order to move on.

“It’s not because we want to just get it out of the way,” Kilborn says. “We’re very proud of these songs. We just need to keep moving forward with new material.”

Putting out older tracks has its benefits. They can gauge listeners’ tastes and use them as a rubric for future songs and also gradually reignite fans’ interest in the band. Their June release, “You Make Me Feel,” an upbeat, guitar-rich track reminiscent of Maroon 5, was created more than three years ago, but has swiftly become the band’s most listened to song on Spotify.

An album — perhaps a few — will come eventually, they say, but it won’t come any time soon. The pair would rather have a slow build-up, prefaced with strategically released singles over an immediate, full album drop.

“We’re mindful and conscious of creating an album,” Kilborn says, “but we’re not planning it too hard.”

“It’s going to be a journey,” Grimé adds.