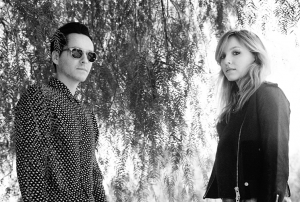 The Internet is a peculiar thing. Especially when it comes to releasing and disseminating music. Take, for example, the brother-sister indie pop band, XYLØ. Even though they’ve never had their own show, haven’t recorded an album, and have only released four songs, their music is everywhere.

One of their songs, “Afterlife,” premiered on Zane Lowe’s Beats 1 radio station. Another song, “Between the Devil and the Deep Blue Sea” played in the background of a KTLA newscast. Two of their songs have been listened to over one million times on both Spotify and SoundCloud, and they have fans hailing from as far away as Malaysia, Israel and Russia. And they’ve only been around for a little over a year.

“That’s what’s blowing my mind,” says Chase Duddy, the band’s producer. “With technology, you can just put your music out there and anything can happen.”

He and his 21-year-old sister Paige made their first song, “America,” in spring of 2014. “Most people think since we’re brother and sister that we’re in a family band and that we performed for our parents after dinner in front of the fireplace,” says Chase, who is 10 years older than his sister. “That couldn’t be further from the truth.”

They recorded one song for their parents and grandparents back when Paige, the band’s vocalist, was only 13. But that was just for fun; the idea of forming a band and taking music seriously never entered their minds. Not only was there a huge age gap that made working together difficult (while Paige was in middle school and high school, Chase was already pursuing his career), but the pair were geographically isolated from one another. Chase spent the bulk of his twenties living in Hollywood and Los Feliz, while Paige remained in Westlake Village, where they both live today.

Over the years, Paige would occasionally lend her voice to Chase’s projects, and their chemistry as a team slowly developed. It wasn’t until the beginning of 2014 that the siblings worked on their first official song together, and even then, they didn’t realize what they were getting into.

Chase, who was working on a song for a campaign video for Kendall and Kylie Jenner’s PacSun clothing line, needed a female voice to croon over his instrumentals, so he turned his sister for help. “She always had a natural voice,” he says of Paige, who had never had vocal training at that point, “but we weren’t planning on anything to come of it.”

But something did come of it. Kendall’s and Kylie’s fans fell in love with the song, as did the Jenner camp. They contacted PacSun and requested more music from the Duddys, who obliged by creating their first hit, “America.” Their social media accounts were flooded with follower requests, and pirated versions of the song (which was only a demo) were reposted on YouTube, garnering hundreds of thousands of plays.

“We both just kind of looked at each other and were like, ‘Woopsie. What do we do?’” says Chase. “’Perhaps we should start a band?’”

Inspired by the swift success of “America,” a hazy pop ballad about love and freedom, they recorded a longer, remixed version, which they released in February of 2015, marking their official debut as XYLØ. They got a manager, who found them through the PacSun campaign video, and Paige started taking voice lessons at Los Angeles College of Music.

By mid-2015, they had recorded a number of songs, but for reasons Chase and Paige still can’t explain, they decided to hold onto them. “It just didn’t feel right,” says Chase. “But ultimately, it was the right move because I don’t think things would have happened the way they did if we weren’t patient and didn’t set ourselves up better.”

Since then, XYLØ has released two more songs — “Afterlife” and “L.A. Love Song” — both of which have been streamed over one hundred thousand times on Spotify. Their dark, eerie blend of alternative and pop, with traces of hip-hop and electronica, seems to appeal to a broad audience. Paige’s voice has been compared to Lana Del Rey’s and their lyrics have been described as universal.

“It’s not necessarily coming just from me, like with Taylor Swift where she’s consistently feeling heartache,” says Paige. “There’s so many different emotions in our songs and it’s not all told from one perspective.”

For the last few months, the siblings have been practicing for their first live headlining show, which will take place later this month at The Echo. Since Paige has never performed live before (“It’s a first for me”), XYLØ has done two secret shows under a fake name, NYLO, at a dinky strip-mall bar in Tarzana and was the opening act for a friend’s show at The Echo earlier this month.

“I just want to make sure that we get everything right,” says Chase, “because you’re only gonna have one first show.”