Bishop Briggs has made a name for herself as a moody, melancholic singer, but there’s more than one side to her. 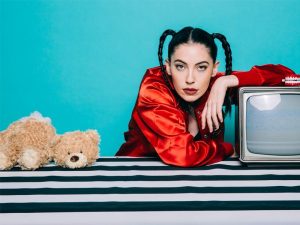 Sometimes, mixing business and family can be a terrible idea. Other times, it can be a boon for the whole clan. Fortunately, things worked out for indie-pop singer Bishop Briggs and her older sister Kate.

Kate is Bishop’s manager, handling the singer’s Instagram account and day-to-day activities, and sometimes even moonlighting as Briggs’ “part-time therapist.”

“It’s really nice working with my sister,” Bishop says. “There’s something about having a sibling that you know will always stick with you.”

As Bishop tells it, Kate has always stood up for her younger sister. The 24-year-old shares a story about a time in high school when Kate came to her defense after a guy Bishop was dating started making out in front of her with two girls at a party.

“He kept his eyes open when he was doing it,” Bishop recalls. “Like, who does that?”

Sobbing, she left the party and called Kate. And then Kate showed up.

Whatever went down ended up working in her favor, and the boy became even more invested in Bishop than before.

Bishop is Scottish but was born in London and has been living in Los Angeles for the last six years. She spent the bulk of her adolescence living in Japan and Hong Kong. (It was in Hong Kong where the incident with the boy took place.)

Though their lives were exciting, moving around so often wreaked havoc on the siblings’ friendships, because they were so impermanent. It is because of this that Bishop believes she is closer to her sister than she would have been had they grown up in a more stable environment.

“It’s kind of a revolving door of people,” she says. “You can’t really get too close to people before they leave. So we kind of stuck together.”

Another thing that has “stuck” to Bishop’s life has been music. As a teenager in Hong Kong, she took singing classes every Saturday for years before relocating to Los Angeles, where she studied at the Musicians Institute. Even though she’d been singing for years, it wasn’t until she performed her final project at the school that she discovered her current style.

“I was screaming, rolling around on the floor, and jumping up and down,” says Bishop’s, who performed Janis Joplin’s “Piece of My Heart.” “I finally felt like myself.”

Smoky, throaty, and full of force, Bishop doesn’t sing so much as roar. Her vocals are so electrifying and visceral that instrumentals are almost unnecessary, and were she to abandon her producer and go fully acoustic, she’d probably have no trouble whatsoever filling up an arena. (And for those worrying if it hurts to sing with such vibrato, Bishop’s responds that “it sounds worse than it is.”)

For close to five years, Bishop has touted her voice around Hollywood, emailing up to 30 venues a day in the hopes of scheduling a show. Calling it a “valuable” experience that “teaches you what the real world is like … in a very raw and sad state,” she accepted any and all offers she got, which led to some memorable experiences. She played at coffeehouses and bars with stripper poles, and recalls one particular venue that reeked of urine, and an “awkward” night when she performed in the middle of a stand-up comedy show.

In 2015, while belting out tunes at “a tiny bar,” she caught the attention of an A&R representative named George Robertson, who helped her record her first single, the syncopated, guitar-filled ballad “Wild Horses.” In the year or so since, Bishop’s career has taken off. “Wild Horses” was picked up for an Acura commercial, and Bishop got another song, “Mercy,” on the soundtrack for the Vin Diesel action flick, xXx: Return of Xander Cage. Last fall, she went on tour with Coldplay, and in March, during her first visit to South By Southwest, she opened for the rapper Lil Yachty. Her self-titled debut EP came out on April 14, and when we spoke, she was gearing up for a performance at Coachella.

To achieve so much in so little time is remarkable, but Bishop is unfazed, crediting her accomplishments to the many years she spent roughing it in the trenches, peddling her music, and accepting any gig she was offered.

“I just never gave up,” she says. “It’s so important to be your own biggest fan, even if you have to constantly convince people, including yourself, that you’re worthy of their time and energy and ears.”

Tales like this, combined with Bishop’s musical proclivities — dark, murky pop steeped in the pathos of the blues — can give the impression that the singer is stoic and ruminative to a fault. But that’s only half true. There’s a division between the persona she reveals in her tunes, which are usually inspired by old memories and past diary entries, and the person she channels in her everyday life.

In other words, she may croon about “dead man’s arms” and hearts that are like “empty gun[s],” but there’s levity to her as well. Like every other 20-something female, she has an affinity for ’90s fashion — think choker necklaces, Scary Spice buns, and ovular, Kurt Cobain-esque sunglasses — and she’s into body art.

She got her latest tattoo — a black-and-white heart-face covered in 10 teardrops — a few weeks after getting her skin inked for the first time. For “as long as [she] can remember,” Bishop has wanted a tattoo, and she chose to get an image of a roaring mountain lion because the big cat kept showing up in her deck of medicine cards.

“I’m definitely hooked,” Bishop says. But before she can tell me about the “six other ideas [she has] in [her] brain,” Kate interrupts her.

“Did you put lotion on it?” Kate asks, referencing the new tattoo, proving yet again what a vital role she plays in Bishop’s life.

← Berkeley Rapper Rexx Life Raj is Feeling Like A Dad Right Now A Primer on Skepta and U.K. Grime →