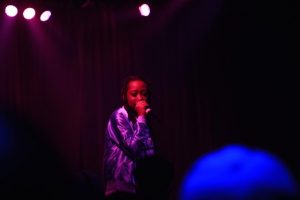 Amber London is in a moment of transition.  Like many 23-year-olds, the Houston-bred rapper is contemplating moving out of her family’s home, what she wants from her career, and where her identity fits with that vision. “I’m figuring out who I am,” she says. “Just figuring out the world that I’m living in, and, you know, young adult-type problems.”

But Amber London—née Linwood—isn’t your average 23-year-old. She’s got five releases under her belt, 15,000 Twitter followers (and counting), and a standout flow that’s earned her endorsements from the likes of Spaceghostpurrp and Gangsta Boo.

It makes sense, then, that the self-proclaimed “Underground Queen” would document her life in flux on her latest release, Life II Death. The mixtape marks her first project since 2014’s chopped and screwed record Hard 2 Find. Her penchant for the style is still there, but it also sees her shedding the hazy, early 90s influence that dominated earlier works like 2012’s acclaimed 1994. Nixing the retro sound was a conscious decision, she says, largely because the 90s have become too popular for her taste. “The 90s will always be an influence, but I met too many people who are doing it now,” she says. “It’s all about staying ahead of the game.”

London, who grew up in Alief, Houston and still lives with her family, has been rapping since the age of 13.  Most of her songs are born from the freestyles she spits through a computer mic when she has something on her mind.

“In Houston, that’s what people do to pass the time. Even if you’re not a rapper, you could be sitting next to a little Asian boy who starts rapping,” she says.

That’s how she discovered her knack for it growing up. “I didn’t think I was a rapper,” she says, humbly. “I was just doing what everyone else was doing.”

London started taking the craft seriously after graduating from high school in 2010, and she dropped her first mixtape, Flight to London, the following January. After releasing 1994 the year after, she caught the attention of Raider Klan’s Purrp in Miami, who invited her to join the collective. London remains the group’s only female member and still uses primarily Klan-produced beats and production for her projects. Since joining, she’s dropped two more projects, including 2013’s Stay True to the Phonk, a 25-track album that was an underground hit on Soundcloud, with songs clocking over 60,000 times.

Her sixth release, Life II Death, ventures into new territory, experimenting with new sounds and flows. The tracks are bouncy and grimy, an abrupt turn from the laidback, spacey pacing of her previous work. The beats are moodier, more sinister than what she traditionally uses in her music, a shift she attributes to the “dark times” she was in while writing and recording it.

“I was just battling life,” she says, alluding to health problems she struggled with while making the tape. Since the age of 17, London has suffered from the thyroid condition Grave’s Disease (“the one Missy Elliott has”), whose complications can range from insomnia to muscle weakness to depression and anxiety. In the last year, she was diagnosed with more health problems, the details of which she’s not comfortable revealing. But the combined toll of her conditions “kind of took me to a bad place,” she says.

“Can I Live,” a brooding, downtempo track on the mixtape, plays off London’s frustration. “Can I live?” she coos in the intro. “Like asking me about shit I do / Fuck’s wrong with you?” There’s a yearning for peace and anonymity in the track, and the angst of entering one’s twenties, especially when racked by illnesses, is palpable.

Despite the new direction, the Amber London of yore—the attitude, the braggadocio, the toughness, the anger—is still there. “It’s still going to be very hard, in your face, like it-or-not type music,” she says. “It still has that same vibe you get from all my tapes.”

That vibe is the funk, or “phonk,” as she calls it, of the music—its soul. It’s the particular attitude she brings to each project, be it through nostalgic 90s samples, chopping and screwing, or the swagger and confidence of her delivery.

Life II Death’s phonk is more futuristic, she says. It has less to do with samples and retro influences than it does with trying out new sounds and production styles. “Whatever I’m influenced by at the time that I make a song comes out in my music,” she says. “It’s really about trusting my ear and finding different influences.”

London’s music stands out from her Raider Klan peers, decidedly more fierce and aggressive than the typically chill vibes of, say, Chiiirp or Lil Champ Fway.

“I had anger issues growing up, so I found that by rapping and cussing and being aggressive in my music, I could get it out,” she says. “And that’s the way I still use it today. My music is very expressive.”

She’ll spit about weed and Gucci handbags, but the bulk of her tracks are more focused on day-to-day struggles, like her aversion to the spotlight (staying “low mothafuckin’ key”) and her commitment to staying on her grind and making music. “Maybe I’ve never killed anyone, but I feel like I’m a gangsta because I stay true to myself,” she says. “I don’t compromise who I am for anything or anybody.”

She embraces her underdog status, and while gender politics aren’t an overt or intentional part of her songwriting, her experience as woman in the rap game has left its mark on her music. London’s subject matter varies, but a message of strength ties her tracks together. The word comes up often during our conversation, whether it’s London reffering to “strength that I can stand with the guys,” or the “strength that you can listen to my music comfortably as a male or female.” Though she’ says she’s not sure if she’d consider herself a feminist, London is steadfast in her desire to empower women. “I want girls to feel tough when they listen to my music,” she says. “I want them to feel like they can take on anybody…because we’re just as important and just as talented and just as creative and just as smart as anybody else.”

London plans to move to Miami by the end of the year to join the rest of her Raider Klan labelmates, and to finally experience living on her own. Her last trip to Miami was a productive one, and she hopes to pick up where she left off after relocating.

“I would sleep two hours and then wake back up and continue to make music,” she says. “That’s why I want to go back out there, because I know I’ll get a lot done.”

London says fans can look forward to more new music and featured artists on her tracks as she looks ahead to collaborations, something she hasn’t done much of in the past. But her top priority is staying true to the phonk. “At the end of the day, it’s still gonna be Amber London,” she says, “I’m just going out there to work with others. But I’ll still be me.”

← Love Mixtapes? Like Vinyl? This Company Combines Them Both It's Not Easy Being Shura: An Introduction to the UK's Latest Avant Pop Singer →