Son Of A Cocaine Dealer, Rapper Bricc Baby Lives Up To His Name 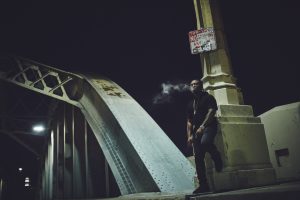 It helps to have friends in high places. Just ask Bricc Baby, an underground L.A. rapper who came out with his second mixtape (Nasty Dealer) in April.

Bricc grew up in South L.A., where he befriended a young Kid Ink and Casey Veggies. Later, he moved to Atlanta where he met Future, Young Thug, Young Scooter and Peewee Longway. The Atlanta gang taught him how to freestyle, and he was Casey Veggies’ driver for his first tour. He formed Batgang with Kid Ink, who also helped the young rapper choose his name (he was formerly MPA Shitro, Shitty Montana and Bricc Baby Shitro) and took him on tour in both Europe and the United States.

“Yeah, I’m pretty lucky,” says the 27-year-old MC. “I’m blessed to be in a position where I run into people that are real heavy in the game.”

The downloadable Nasty Dealer has been hailed as an underground success by Complex and Pigeons and Planes, but what’s most surprising about the album and newbie rapper is that he’s only been in the game for about four years. “I was always on the scene,” he says, “but I wasn’t rapping, you know?” Bouncing around from high school to high school, he always had a passion for rapping, but never took it seriously. “I’d rap in school, but I never wanted to be a rapper. It was just something to do in class when I wasn’t listening.”

Many of his friends were involved in the rap game, though, so rap was always a part of his life. After going to jail for eight months in 2012, Bricc Baby decided to get his act together and make money “legally.” He considered being a manager, but reneged on that idea when he realized that he himself had a knack for rapping. “I was actually going ham in the booth, like harder than these cats,” he said. “So I was like, you know what? I’m going to go full-fledge with this rap stuff.” 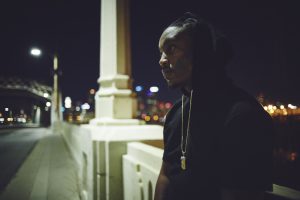 Now that he’s come out with two mixtapes and gone on two tours, people are used to the idea of Bricc Baby being a rapper. But at first, it came as a surprise. “I’ve always had a big presence in the streets,” he said, “so when I started rapping, people were like, ‘Oh, shit. You can rap, too?’”

He came out with his first mixtape, Son of a Bricc Lady, in 2014, which had features from Young Thug, Casey Veggies and Young Scooter. The project’s title was inspired by his mother, who spent four years in prison for dealing cocaine. “I’m the son of a brick lady,” he explains. “All my game came from my mom… so I just dedicated it to her.”

After the release, he went on tour in Europe with Kid Ink and members of Batgang to promote their August 2014 release, Batgang: 4B’s. When he returned, he started spending more time in the studio working on his latest project, Nasty Dealer. The 18-track mixtape is a tour de force of trap-heavy beats and gangsta rap lyrics that pair well with the artist’s scratchy, strung-out voice, which is reminiscent of Young Thug and Rich Homie Quan. With production from big names like Metro Boomin and Brodinksi, the mixtape includes verses from Bricc Baby’s usual suspects (Casey Veggies, Young Thug and Kid Ink) as well as the Bay Area’s Lil Debbie.

“I’m just trying to bring a different sound, so that they don’t put me in the same spot as everybody else,” says the rapper, who describes his sound as “weirdo, EDM, trap.”

For now, his goal is to get his music in the clubs and on the radio, which shouldn’t be hard considering his connections to some of today’s biggest rappers (“Any place that Kid Ink is booming,” he says, “they’re starting to catch on to my music”). Of course, haters are gonna hate, he says, but so be it. “I’ve been running a long time in the streets and there’s people that don’t want to see me win. But they don’t have no choice.”

← L.A.'s Smallest Radio Station, 97.5 KBU, Broadcasts Out Of A Malibu Bedroom How an L.A. block became analog alley, a destination for all things retro →