With his debut album, Jentrify, Elujay speaks for both himself and Oakland. 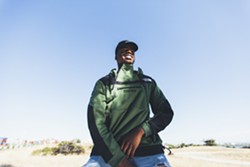 Elujay is no stranger to Interstate 5. A third-year business student at the University of Redlands, he’s made the roughly 400-mile journey between SoCal and his hometown of Oakland multiple times in the last few years.

In fact, it was because he was still driving back from Los Angeles that our original interview had to be postponed. About a week before, he’d received an email from an A&R executive at Atlantic Records who’d discovered the 20-year-old’s music through SoundCloud and wanted to meet him.

With his best friend, Derell, and photographer-videographer, Andre Malik, in tow, Elujay headed south the day before the meeting was planned. Though he has a distribution deal with San Francisco record label EMPIRE and is represented by Oakland rapper Kamaiyah’s manager, Elujay is still very much an independent artist.

“I was excited,” he says of the meeting. “One of the things he told me was that he doesn’t get artists in there often. He pitches artists to his bosses a lot, and they just kind of are not hyped about them. Me getting in there was rare.”

The 45-minute meeting, which took place on a Wednesday at the label’s office on Fairfax Avenue, involved a lot of talking and a tour of the facility’s studios — where they met Drake’s ghostwriter, Quentin Miller. At the executive’s behest, Elujay also played tracks from his upcoming debut album, Jentrify, out Friday, Aug. 25.

“This is going to be a breakout record for me,” Elujay says. “And they loved it.”

From a young age, Elujay was interested in music, picking up guitar in elementary school, and later trumpet and beat-making.

“I used to sing around the house,” he says, but it wasn’t until high school when he started participating in poetry slams that he began writing his own verses. Around that time, he was also interested in skateboarding and graffiti culture, and, if it hadn’t been for a close brush with the law when he was almost caught by police while tagging public property, he probably wouldn’t have turned his full attention to making music. “It was scary,” he says, “so I was just like, ‘I’m going to drop the cans and get serious.’ ”

Catching the emcee Kev Choice at Hiero Day in 2014, during his junior year of high school, further inspired Elujay to pursue music because it helped him realize that he could combine rapping with singing and live instrumentals. He dropped his first mixtape soon thereafter, which included trumpet solos along with his FruityLoops-produced beats.

With Jentrify, his most comprehensive project to date, Elujay is hoping to cement himself as an artist on the rise and gain fans nationwide because he doesn’t “want to just stay local.” More than half a dozen producers worked on the 13-track album, which features guest appearances from seven Bay Area artists, as well as live guitar, percussion, bass, and even saxophone.

As the album’s title suggests, it’s loosely centered around the theme of gentrification, specifically in the Bay Area, which Elujay says is becoming filled with people who “don’t respect the culture and those who have been living in Oakland before they arrived.” The first track, “One Time,” addresses the subject head-on with lines like, “I hear you’re rolling around the town like you own this bitch.” Songs like “580” and “EBMUD” continue the motif.

Jentrify is also a personal album, that Elujay says, “has a lot to do with my adolescence and what I went through.”

In “Soul Food,” Elujay uses the analogy of food to talk about yearning and struggling from both a personal and universal standpoint, and “Google Maps” could be an anthem for loners, or at least an ode to taking time away from society to focus on oneself. On “We Don’t Mind,” a delicate, piano-laced song with guest appearances by Oakland singer Samaria and Berkeley rapper Caleborate, Elujay pushes forth his agenda of individualism again, urging listeners to be proud of who they are despite their differences.

“I’m very blunt and honest about my life,” Elujay explains. “In high school, I really wanted to do what people thought was cool. I was a kid that was really worried about what other people thought.”

Collaborating with other artists, especially local up-and-comers like singer ymtk and rapper Rexx Life Raj, was another goal. Referring to them as “gems,” Elujay says he wanted to “catch them in a rare moment, before they blow up.”

Many people — most of them unpaid — were involved in the production of Jentrify, which was recorded throughout 2015 between one of Elujay’s producer’s home studios near Lake Merritt and All Bay Studios in Berkeley.

“Building the album was not easy,” Elujay says. “It got crazy and hectic, and there were a lot of people in the mix. There was actually a lot of people that wanted to be a part of it that I had to turn down.”

But there were those who he did not say “no” to, like his photographer-videographer Malik. In fact, it is partly because of Malik, who is now a member of Elujay’s artist collective One Time, that he says he won’t sign to Atlantic, even if a deal were to be offered.

“I just want to maintain being independent, at least until the right deal comes around,” Elujay says. “I want to bring my team with me. I want all of them to see similar success because they’re the people that helped me brand myself and got me to this level that I’m at right now.”