Austen Afridi of Viceroy can heat up a dancefloor with his tropical house tunes. 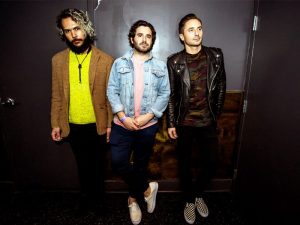 It’s a good thing winter officially ended on Monday, because Austen Afridi, the self-proclaimed “Sultan of Summer,” has had a tough time coping.

“We had a very real winter,” says Afridi, who helms the San Francisco tropical house act Viceroy. “In fact, I got Seasonal Affective Disorder these last few months.”

Unluckily for him, The Old Farmer’s Almanac predicts more rain for the Bay Area and temperatures no higher than 60 degrees for the next two months. But now that summer is around the corner, Afridi is confident he can hang, even if the impending season turns out to be as cold and dreary as the last.

“You’re absolutely right, it’s not always sunny here,” Afridi says of San Francisco. “But I love it. I love it for a million reasons other than that.”

Hence why he uses the motto “Summertime all the time” to describe both his mentality and music. Afridi may live in a perennially gray city, but the sun is always shining, at least in his head.

“It’s not just a slogan or a mantra, it’s a state of mind,” he says. “It’s really this all-encompassing vibe that I try to portray to my fans: that you can have a good time and let go and enjoy yourself anywhere.”

This ethos is solidified in Afridi’s latest single, “Marinate.” Over funky basslines punctuated with cow bells, Afridi’s friend Wilki — whose naturally deep voice was pitched even lower for the song — burbles life advice, like “Marinate your body / Marinate your soul.”

“I like funny words that aren’t used to describe normal, everyday things,” he says of the song’s nomenclature. “I think they can be cool ways to describe things.”

And it’s not like Afridi’s unorthodoxy extends only so far as his patois. You can hear it in the 26-year-old’s bizarre, often disco-flecked music, like when he remixes popular songs of yore, such as Montell Jordan’s “This Is How You Do It,” Shaggy’s “It Wasn’t Me,” and the Beach Boys’ “Kokomo.” And you can see it in his campy, artistic music videos that show party essentials like disco balls and sunglasses being distilled into glittering, amber liquids or a nerdy guy in short-shorts performing ungainly dance moves in random places like butcher shops and senior citizen’s homes.

Compared to other DJs and electronic music acts, the way in which Afridi makes music is also weird. Though he started crafting tunes using programs like Logic and Ableton, in recent years, he has veered away from working solely with a computer. Starting with Viceroy’s set at Treasure Island Music Festival in 2015, live instruments, such as saxophone, violin, and guitar, played by Chris Clouse, Simon Friedlander, and Joe Berry, have been added into the mix.

“It still puts me in the electronic music and club world,” Afridi says of the new additions, “but it sets me apart, too. It’s a lot more than your average DJ set.”

And even though he says he’s “still figuring out a word to describe it,” something tells us he’ll come up with a name for it sooner rather than later.

← When The Going Gets Tough, Growl Like What You're Hearing? →