The Patron Saint of Sex

Carol Queen is battling cultural misnomers about sex, one lecture at a time. 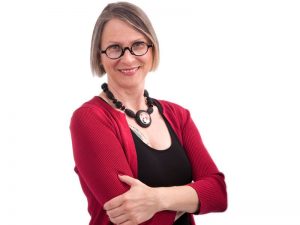 The week of Valentine’s Day was busy for Carol Queen. Then again, so are most weeks for the sexologist who, in addition to being the oldest working staff member at Good Vibrations, is also a lecturer, author, educator, and founding director of the nonprofit Center for Sex & Culture.

“There’s always a lot going on in my life at any single time,” says Queen, who is in her 50s. “There are people who need everyday to be the same, and then there are people who are completely allergic to it. I’m pretty sure I’m one of the latter.”

“When I was a little kid, I was aware that there was something squirrely in my house, but I didn’t know enough to know what it was,” she says. She attributes some of that “squirreliness” to her mother, whom she describes as an alcoholic who “was also really weird about sex.” It wasn’t until decades later that Queen and her father learned that she had been a victim of sexual abuse as a young girl.

Growing up in the 1960s in the countryside of Oregon also didn’t help Queen with her quest to learn more about sex. Even though the sexual revolution was just around the corner, the 1960s, she says, were a time in the U.S. where “very few pockets of sexual freedom were alive and well” and her efforts to learn about sex were thwarted more often than not.

“It was not even remotely possible for me to get answers to most of the questions I had,” she says. “My family wasn’t a good source. I asked teachers, some of whom stuck their necks out and answered questions. The library only had one book about sex available to kids. So, after a while, I started having sex to see if I could figure it out myself.”

Though seeking answers with her body was helpful, it’s not the primary route Queen recommends for young people eager to learn more about the activity. Her interest in promoting less opaque, more in-depth sex education — be it in high school classrooms or boardrooms with CEOs — has led Queen to adopt the term “pleasure activist” when describing herself. Though she didn’t invent it, she identifies with the neologism strongly, claiming that pleasure “is the thing that sex education says nothing about.”

Sexual identities and orientations are other topics that Queen holds near and dear. In the early 2000s, she co-coined the term “absexual” to refer to people whose sexualities are moralistically opposed to sex, which is different from someone who is asexual.

“I really want people to understand that each one of us is an individual and that there are so many ways for people to experience sexual feelings,” she says.

Queen is particularly rankled by what she calls the second most common question sexologists gets asked: Am I normal?

At the root, Queen blames our culture for instilling this sense of shame. This is why if she could change one thing, it would be to help people feel more accepting and comfortable with their sexualities.

“This is a rather conservative time,” she says. “It’s not full of conservative young people by any means, but there are a lot of Republicans in office, and they’re not sexual freedom activists.”

And even though things in our country have take a turn for the worse since last November, Queen still believes we can change the national dialogue around sex.

END_OF_DOCUMENT_TOKEN_TO_BE_REPLACED

“They Put My Face On Sex Toy Batteries”

How modeling photos a Canadian woman took as a teen have continuously popped up in unexpected places over the last 15 years. OK Whatever “Shhh. Don’t tell anyone. This is our little secret.” That’s what the image of Lauren Gulyas seems to be saying, her pointer finger...