The Rise and Fall of Snortable Chocolate

Coco Loko was poised to become the next fad, but then the FDA intervened and it’s since disappeared from the internet. 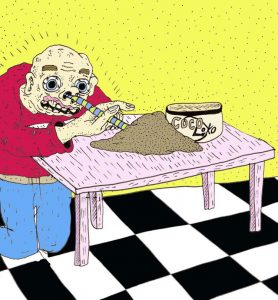 When Legal Lean started selling a snortable chocolate called Coco Loko in 2017, it made sense.

The three-year-old Orlando, Fla., company was already turning a profit selling a fake version of one illicit substance: lean, a cough-syrup-soda-mixture popular in the hip-hop world and prized for its calming and relaxing abilities. So why not add another?

It wouldn’t be hard to do.

Legal Lean founder Nick Anderson knew he could use the same distributors he was already working with and target the same consumers if he put out a new product. What’s more, Coco Loko could help the company expand by appealing to a new demographic that liked taking uppers and ingesting things through their nose.

It seemed like a good idea to Anderson; a smart investment in a product with the potential to become “really big” or maybe even a “future trend.” So he made it happen.

When Coco Loko hit the market in the summer of 2017, it wasn’t approved by the U.S. Food and Drug Administration, but that hardly seemed to matter. The internet still went nuts for it.

For years, snortable powdered chocolate had been popular in Europe, originating on the dancefloors of Berlin nightclubs. With Anderson’s new product, Americans could now, for the first time ever, imbibe the stuff and try it out for themselves. Touted as a mood lifter and energy enhancer, the $20 chocolate mixture — made from cacao, ginkgo biloba, taurine, and guarana — was marketed as a drug-free stimulant that would give you a 30-minute buzz.

Many were elated; others were worried. Senator Chuck Schumer released a statement urging the FDA to look further into the product, arguing that it “has no clear health value” and could send the wrong message to kids. Publications wrote myriad articles about the powder, hailing it as a new fad and a healthier alternative to stimulants like cocaine and energy drinks. Rapper-turned-Viceland-star Action Bronson featured it in an episode of The Untitled Action Bronson Show and Stephen Colbert mocked it with a fake newscast on the Late Show.

Customers who bought Coco Loko through Amazon left reviews calling it “life changing” and praising it for its energy-inducing properties and libido-enhancing capabilities. “WOW. Not only did my energy increase, but my love-making drive went through the roof! This thing not only helped my energy, but my marriage as well,” wrote one Coco Loko user. Some customers were less enthused. One reviewer described it simply as “poop garbage.”

But it turned out the public’s excitement was short lived. Why? Because Coco Loko no longer exists.

On December 12, 2017, no more than five months after Coco Loko was unveiled online, the FDA intervened and issued a warning letter to the product’s marketers and distributors. Coco Loko they said, was an “unapproved drug” that violated sections of the Federal Food, Drug, and Cosmetic Act. In addition to warning that it could “encourage drug abuse in individuals, including minors,” the organization worried it could cause spasms of the vocal cords, muscle tightening in the lungs, and acute asthma. They gave Legal Lean and Anderson 15 days to respond and correct the issue. Within a day, all traces of Coco Lean had been wiped clean from the internet.

Eight months after its disappearance, I decided to go on a crusade to find out exactly what happened from Legal Lean’s standpoint. It was not an easy task. Coco Loko’s website no longer exists and the product is now nowhere to be found online except when referenced in news articles.

When I tried the link that used to deliver me to Coco Loko’s page on Amazon, I was greeted with a picture of a golden retriever and the message “SORRY we couldn’t find that page.” When contacted in the hopes of finding out why Coco Loko mysteriously disappeared from their website, an Amazon employee named Christine had no answers for me, and recommended I check out “a similar item” — an organic cacao powder used for baking — that wasn’t similar at all.

I tried to reach out to Legal Lean via an email I found on their website, but the message bounced back. So I got more creative. Text at the bottom of Legal Lean’s website said it had been “designed and managed” by Black Collar & Company, LLC, so I did some digging. The first search result that came up was for an apparel company called Black Collar in Minneapolis. I knew that wasn’t right, so I narrowed my search by adding “Florida” in the hopes that Legal Lean’s web developers were based in the same state as them.

I was right. A company with that name existed in Orlando, and there was even a phone number conveniently listed for me to contact. Instead of calling, I texted the number — again, taking a chance — introducing myself as a journalist trying to get in touch with Coco Loko’s founder, Anderson.

An hour-and-a-half later they texted me back without a message, just a 408 phone number. I called it and a woman answered. She suggested I try sending a message to a specific gmail address. Thirty-minutes after sending it, I received a response containing yet another phone number and a simple, one-line note: “Call Nick directly.”

When I reached Anderson on the phone the next day, I learned that I was incredibly lucky to be able to do so.

“After the FDA stuff, for a couple of months, I really didn’t want to talk to anybody,” Anderson told me. “I just didn’t really trust what was going to be discussed or printed by a journalist, so I kind of just avoided anyone who reached out to me.”

Time has helped change that. The 30-year-old Orlando native described himself as “now, just kind of, like, over it” and was ready and willing to break his silence with an interview for OK Whatever. He had a 20-minute drive ahead of him, he said, and he was ready to talk.

When Anderson first decided to get into the snortable cacao business, he didn’t receive much encouragement. “A lot of people would say it wasn’t a good idea. Or that no one’s going to buy it because it’s stupid.”

He didn’t listen to them. As an already established entrepreneur — Anderson formed Legal Lean in 2015 at the age of 27 — he was used to following his own lead, and taking risks.

“I thought it was going to be really big in the United States because usually whatever’s popular in Europe gets popular here later on.”

Anderson devised Coco Loko’s recipe himself, experimenting with different ingredients, learning firsthand which ones give you energy and which ones simply burn your nasal cavities. He used common energy drinks as references when devising the mixtures, and made sure that none of its components were too arcane or difficult to source.

Though he didn’t expect the product to get approved by the FDA any time soon — “Nothing really gets approved by them,” he said. “Monster, Red Bull, and 5-Hour Energy are all not approved.” — he also didn’t want to get in trouble for its ingredients.

He never did, but soon after Coco Loko’s launch, problems started pouring in for other reasons.

Whenever Anderson tried to get a celebrity or “someone very famous” to put their name behind the snuff, no one was interested. In September, the spiked-energy-drink company Four Loko slapped Legal Lean with a cease and desist for using a name that was similar to their own. And then in December, the FDA’s letter arrived in the mail.

Anderson described it as “not, like, a criminal threat or anything,” with a “respectful, more business-like tone,” but admitted that it was still “pretty intimidating” — at least at first.

It turned out the FDA’s issue with Coco Loko (along with their other product, Legal Lean) wasn’t the ingredients, but the way the two products were marketed — as legal alternatives to street drugs. To remediate the issue, Anderson had to change the angle for each product, redo their websites, and delete all of the company’s YouTube videos and promotional materials (many of which featured people snorting lines of brown powder, a definite no-no in the eyes of the FDA).

In the end, Anderson took both websites down, scrubbed Legal Lean’s pages of any old marketing material, and then, a few months later, re-launched the imitation sizzurp as “a natural health solution to ease stress and relax the mind.”

Coco Loko, on the other hand, he left to falter. Even though he has “thousands and thousands of empty containers and bulk materials” in storage, Anderson’s desire to flip it into product has since been quashed.

Technically, he can still sell Coco Loko — online, in stores, and to distributors — he just has to come up with a wholly new way of advertising it. And to Anderson, that defeats the whole purpose because when his product is just like every other cacao powder on the market, it’s not only boring, but unprofitable.

“It would have to be a cheap product, not a cool novelty product because I just couldn’t market it as a snorting thing,” he said. “And then there wouldn’t be much of an allure to it. The price would have to be dropped from $20 to, like, $3.99.”

Anderson has wholesale customers that still ask him about buying Coco Loko. And you can still find containers of it at head shops around the country. But for the time being, he has no plans to revive the pioneering parody product that he once hoped would make him rich.

“We’ve decided to put it on the backburner for now,” he said, sounding slightly downcast. “We thought it was going to work, we took the risk, and now we know.”