Three is the Magic Number

Unknown Mortal Orchestra’s frontman Ruban Nielson couldn’t stop himself from writing about the love triangle he and his wife had with another woman, and now he’s dealing with the consequences. 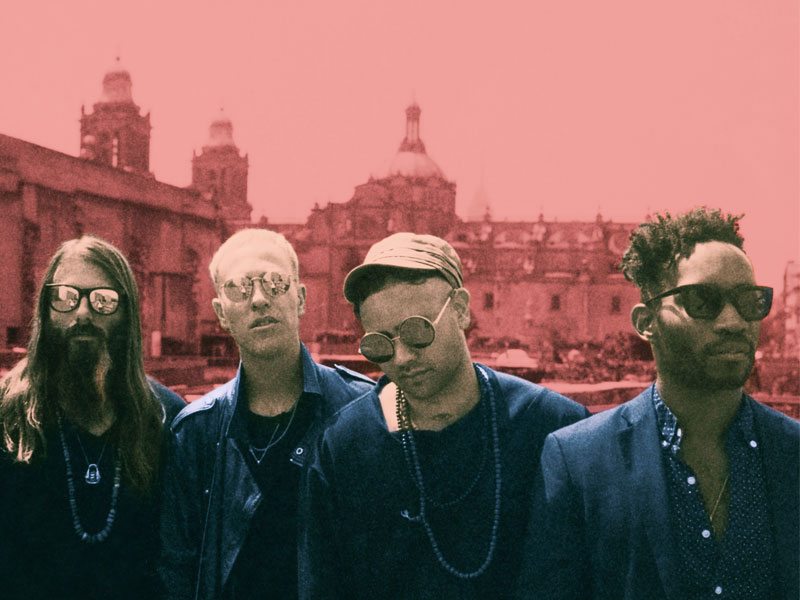 Ruban Nielson, frontman of the indie-rock quartet Unknown Mortal Orchestra, does not like Thanksgiving. In fact, he hates it so much he took his wife and two children to a remote log cabin in Oregon this year to escape the festivities.

“I wanted to get away from Portland so that nobody would ask me and my family to do Thanksgiving,” says Nielson, who joked on Twitter that he was “Thankful I don’t have to eat any of the shitty food your family made today.”

But it’s not likely Nielson has had to endure many atrocious Thanksgiving meals himself. Both he and his wife are from New Zealand, and they only moved to Portland about four years ago.

“We don’t have any personal connection with Thanksgiving,” he tells me in early December. “And even if we did, I have no interest in celebrating it at all. It seems like a farce.”

As I chat with the 36-year-old over the phone from his home in Portland, he sounds energetic and alert, which is not what I’d expected from the self-proclaimed lifelong insomniac. It turns out that because the cabin lacked a studio, Nielson had little to do to occupy his mind late at night and ended up managing to (finally) catch some shut-eye.

Though he still feels rested, now that he’s returned home, his sleeping patterns have started getting fucked up again, thanks to his habit of whittling away his evenings working on music in his basement studio. But he’s cool with this.

“I don’t really like sleeping,” he admits. “It sucks because you miss out on life.”

Coming from Nielson, who has been known to mine past experiences for his music, this makes sense. In fact, Unknown Mortal Orchestra’s third album, 2015’s Multi-Love, revolves entirely around real-life events, most notably Nielson and his wife’s past relationship with a younger woman.

Nielson had met the other woman, whom media outlets have dubbed “Laura,” while he was performing in Tokyo in 2013. Despite their almost 15-year age gap, the pair kept in touch over email, and it wasn’t long before Jenny, Nielson’s wife, asked Laura to send the couple a selfie. Impressed with her beauty, Jenny asked to get looped into the conversation, and began penning her own private letters to Laura.

It wasn’t long before Jenny invited Laura to live with the couple and their kids, to which the younger woman swiftly agreed.

” ‘I had two thoughts,’ ” Nielson told Pitchfork in 2015. ” ‘The first was, Holy shit, I’m fucked. I’m no match for this girl.’ ” The second? ” ‘This is fate. This is what I’m supposed to be doing. If this is the end of my marriage, then this will be the album that documents it. There are a million ways for this to go wrong for my life, but there’s no way for this to go wrong for me artistically.’ ”

Nielson’s predictions turned out to be half-right. His marriage with Jenny is still going strong, and the album was a success. Hailed as a hit for its pristine production and seamless blending of pop with hints of psychedelia, Motown, and even Italo disco, Multi-Love made it onto a number of Best Album lists for 2015 and charted in not one, but four Billboard categories.

It’s also not very likely that many listeners even knew that Nielson was talking about a polyamorous relationship. Songs like the funky, percussion-filled “Can’t Keep Checking My Phone,” which Nielson told Pitchfork was a reference to trying to keep in touch with Laura once she left Portland for Bolivia, come across as ruminations about needy lovers and our technology-obsessed world, instead of a reference to Nielson’s love triangle. Other tracks, like “Extreme Wealth and Casual Cruelty,” are so couched in metaphors and poetic imagery that it’s impossible to tell they’re about Nielson’s wife and how their relationship has changed since meeting Laura.

Still, despite the album’s lyrical opacity to the public, those close to Nielson understood the song’s hidden meanings — and many were not too pleased.

“I felt like I overshared,” Nielson tells me, adding that he won’t make the same mistake with the next album. “It kind of messed with my life a little bit. Some of my family and friends got really annoyed or offended. It was just one of those lessons where I learned that it’s good to be an artist, but you have to keep your life separate from the art.”

When Jenny’s mother found out about both the album and the couple’s fling with the younger woman, she turned on Nielson.

And even Laura was upset with Nielson.

Since Multi-Love‘s release, Nielson says the pair have talked and smoothed things over, and he fully expects to see her again. Case in point: Laura still has a bedroom in the Nielson house, and it’s exactly as she left it.

But coping without her has been hard, Nielson says. The kids have asked about her — “They miss her like they would any member of my family” — and even Nielson’s sacred basement workspace, where Laura would work as well, doesn’t have the same feel.

“Just the idea of making another album in the basement after everything that happened, I kind of thought, ‘Gosh, it’s going to be really hard,’ ” Nielson says.

The prospect of working alone down there and being inundated with memories was so daunting that for a while Nielson, who is half-Polynesian, considered leaving Portland altogether and moving to Hawaii.

But there were so many holes in Nielson’s Hawaii plan — it would cost a lot to move there, he’d be separated from his band, he might get island fever, etc. — that he nixed the idea.

“For now, I’m going to stay in Portland,” he says, “and just deal with the heavy emotions.”