Tokimonsta Mixes Hip-Hop and EDM For The EDC Masses 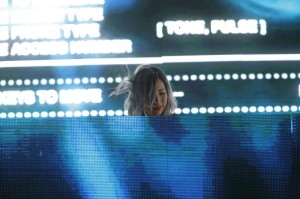 It’s a little past 11 o’clock on Friday and the Las Vegas Motor Speedway is pulsing with sound, lights and bodies. Polyester jellyfish and gigantic LED mushrooms hover above the crowd; the smell of funnel cakes and body odor wafts through the 100-degree air on this first night of EDC Las Vegas. Dust and dirt coalesce into one invisible mass, infiltrating the throats and nasal passages of thousands of ravers, their plastic beaded bracelets click-clacking as they record videos with their smartphones and chug Powerades and syrupy cocktails. A never-ending torrent of synths and molecule-rearranging bass tumble from myriad speakers throughout the 2.5-mile-long complex.

At each stage, a different gradation of EDM plays, as artists and DJs spin melodies, adjust volumes, and tweak tempos. The beat drops, building into an explosive climax at one stage, while a steady wave of trance hypnotizes the crowd at another. Elsewhere, a percussive house jam segues into a drum solo. And over there, to the north, a tinkle of bells unfurls into an Indian-laced flute melody and the crowd goes wild as they recognize the beat to Nas’s “Oochie Wally.”

This is not what they were expecting. This is hip-hop, not EDM. But wait. Don’t you hear the bass? The electro tinge? Isn’t what you’re doing with your feet called dancing? And isn’t that, by virtue of its various qualities, the very definition of electronic dance music?

You nod your head “yes” and wave your bangled arms in the air. This is EDM, you decide. And that blue-haired DJ on the stage knows what she’s doing, you realize. She’s blurring the lines between genres. She’s breaking the rules. She’s pioneering a new sound.

“I like challenging the people that are in the crowd,” says Tokimonsta, the L.A.-based producer/DJ, who created the Nas remix. “It’s cool when you just slip something in and wonder: Are they gonna stop dancing? Give you a weird look? Or are they gonna be like, ‘Yeah, this is super cool’?”

Since the mid-aughts, Tokimonsta has been challenging EDM fans to think outside the confines of traditional electronic dance music. She’s made a name for herself by melding rap and hip-hop beats into her music and crafting complex, unique tracks that have enabled her to reach a slew of listeners from different musical genres. Her appeal is widespread — both hip-hop heads and EDM devotees can find something to like in her music — and, more often than not, her beats are unlike anyone else’s at the festivals she plays.

Calling her style a mix of hip-hop and electronic is about as specific as the twentysomething artist will get. “I don’t like to label my music,” she says. “I’m just a product of everything I listen to; a culmination of all these influences.”

Tokimonsta didn’t always plan on going into music. A classically trained pianist, she started making beats for fun while majoring in business at UC Irvine. She attended Project Blowed in Leimert Park and later, Low End Theory, where she started to hone her skills as an avant-garde beatmaker with a penchant for rap samples. After graduation, she still didn’t consider a profession in music, and instead worked as a business development coordinator for a video game publisher. But she continued making the lush, laid-back grooves that she’s known for today, and when she was laid off in 2009 from a gig in advertising, she decided it was time to get into the music industry.

By 2010, she’d released her first album, Midnight Menu, and was invited to the Red Bull Music Academy in London. She signed to Brainfeeder, Flying Lotus’ record label, becoming the first female on their roster. In 2013, she dropped her sophomore album, Half Shadows, on Ultra Records, and by 2013 had become an internationally recognized newbie in the dance music scene.

In September of 2014, she created her own imprint, Young Art Records, on which she released her third album, Desiderium. “It’s coming together really well,” she says of her label. “We finally have a whole structure in place and a label manager.”

For the better part of this year, Tokimonsta has been on a whirlwind tour, playing in places as far away as Australia and New Zealand, Portland, Oregon, and of course, Las Vegas. She’s producing albums by Gavin Turek and Anderson .Paak and has new music of her own in the works, as well as aspirations to get even more experimental with crossover tunes.

“I either want to do some real rap shit or work with Björk,” she says. “I feel like people are more open-minded now.”

← How an L.A. block became analog alley, a destination for all things retro I Wore Pasties At EDC And It Wasn't That Bad →