Waiting For the Green Light 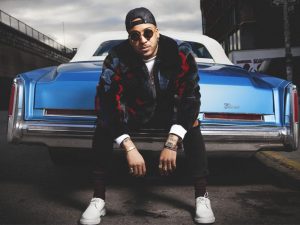 Listen to R&B singer Ro James’ debut album, Eldorado, and you’ll have a hard time figuring out what kind of guy he is.

In some tracks, like the stripped-down, acoustic guitar number “Everything,” the 31-year-old comes across as the perfect man, cooing lines like, “everything’s about you, baby” and “you got me so weak like I need you.”

James reveals another side to himself in “Burn Slow,” a simmered down, cavernous track about convincing a paramour to “call in sick” and “call in favors” so that she can spend the day in bed with him.

By the time “A.D.I.D.A.S.” rolls around, James has dropped any semblance of subtlety, opting for a more straightforward, if not lewd, approach, intoning statements like, “Craving your body” and “All day I dream of sexing you.” (And yes, “A.D.I.D.A.S.” stands for what you think it stands for.)

Other songs, like “GA$” and “Permission,” promulgate this same devious, bad boy behavior, with James purring lyrics about his sexual prowess (“You ain’t never had it like this before”), favorite extra-curricular activities (“I wanna spend the whole night sipping on you”), and the things that are most vital to him (“Pussy, money, weed”).

Not to be forgotten are the wild card ditties, like “Holy Water” and “New Religion,” wherein James namedrops Jesus and preaches the importance of “tryna be a better man” even if you’ve “done seen some things that might test your faith.”

“So who,” you might be wondering, “is the real Ro James?” Well, it turns out he’s all of these things — a good guy, a bad boy, and a Christian.

“The music that we listen to these days, everything is right there in your face,” James says. “There’s no real mystery. It’s not poetic. I want people to think. I want to make people listen to my lyrics.”

Born in Germany, but raised in New York, Hawaii, and Indiana, James grew up in a devoutly Christian household, with parents that put restrictions on the types of music he could listen to. By middle school, he had blossomed into a troublemaker, going so far as to steal his teacher’s wallet so that he could buy pizza for the entire class.

By his late teens, he was concocting music in the studio, penning singles for fellow R&B singer Miguel — whom he met through MySpace — and performing local shows in New York alongside artists, such as Wynter Gordon and Luke James. In 2013, he completed his three-part debut EP series, Coke, Jack, and Cadillacs, with help and guidance from the rapper Asher Roth of “I Love College” fame. He signed to RCA Records in 2015, and now his debut single “Permission” is a Grammy Award nominee for Best R&B Performance.

“I knew that “Permission” was a great song, and I knew that it had a great vibe,” he says. “I just didn’t know that it would go like it did. That completely threw me off.”

But everything else about the album’s success was planned, including its crossover appeal. By including multiple styles of love songs — overt and obvious, candid and polite — James realized he would be able to broaden his listener base.

“I didn’t want it to be all ‘Baby, baby, please,’ ” he says. “I wanted it to be something you could listen to with your homies in the car, but also play for a woman and have her relate to it or feel touched by what is being said.”

Filled with fluttery guitar chords and thick, juicy synths, the 13-track album is entirely bereft of features, making James’ raspy falsetto the one true constant in Eldorado. And it turns out that, too, was intentional.

“For my first album, I thought it was most important for people to hear my voice and to not let it be drowned out by too many lasers and other sounds,” he says.

James recently finished a nationwide tour opening for singers Mary J. Blige and Maxwell, an experience that he describes not so much as intimidating, but illuminating. Unlike the two headliners, James lacked a fully produced set with “lights and fog and all the different things that they had.”

But those limitations, along with his insecurities about being “raw because this was [his] first time around,” ended up helping, spurring him to work harder and perform more fervently than ever before.

“I feel like I’m a hybrid of both of them, and I knew that I had to live up to that,” James says. “So I did. I broke free of my fears and stepped it up.”

← Like What You're Hearing? Two Semi-Charmed Hours With Stephan Jenkins →