Goth Money Records’ ‘Trap Goth’ Is Taking Over The Internet 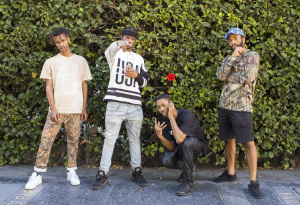 At a Denny’s on Wilshire Boulevard, four of the six members of Goth Money wait eagerly for their first meal of they day. Even though it’s two o’clock in the afternoon, they all order breakfast plates. Unfortunately, the cook is behind on his orders; their food won’t be out for another 45 minutes. To pass the time, they twiddle with their cell phones, watch March Madness, and check their social media fan mail.

“We get a lot of mail,” said MFK Marcy Mane, the group’s lead producer and sole City of Angels resident. “Shit is crazy.”

He reads a Tumblr message from a fan in Houston, begging the crew to visit the Space City before he leaves for the Navy, and a plea from a fan who wants to tour with them. “‘Let me travel with y’all and take photographs of your shows and make beats with y’all,’” MFK Marcy Mane reads aloud. “‘Please, I don’t like school.’”

“Stay in school,” says Kane Grocerys, one of the group’s rappers.

“They’ve got to chill out and experience life,” rapper Black Kray adds from the other side of the table. END_OF_DOCUMENT_TOKEN_TO_BE_REPLACED