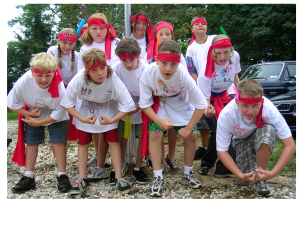 Finally! Speciality summer camps for all the weird kids who’d rather destroy the capitalist system or work on their stock portfolios than sit on logs and make lanyards.

Click here to read about some of our very favorite New York–area summer camps. 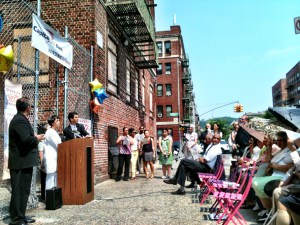 Last Friday morning, Felix Guzman woke up early, grabbed his fishing pole, and headed over to the East River for some catch and release fun. For 40 years he has lived in the same building on Academy Street in Inwood and in that time he has “seen a lot.” So when he got back to his apartment around 11 am and saw that his street was teaming with newscasters, elected officials, cameramen, and local community members, he wasn’t surprised. They’d been there before. “It’s always been tough here,” Mr. Guzman said. “I’m glad they’re doing something about it.”

The building in question was 552 Academy Street, a crumbling 72-unit brick building located across the street from Mr. Guzman’s apartment. A year ago he had stood outside and watched as dozens of tenants dragged their belongings onto the sidewalk, confused and frightened and wondering where they would relocate to next. END_OF_DOCUMENT_TOKEN_TO_BE_REPLACED 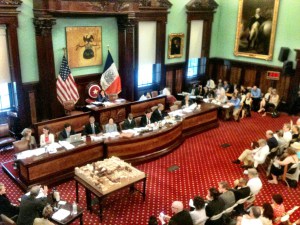 The City Council’s public hearing on New York University’s Village expansion plan drew a crowd on Friday that was notable for both its size and its star power— Matthew Broderick offered testimony on the neighborhood’s quickly eroding quirkiness—and its eagerness to communicate its distaste for the controversial project.

In fact, the City Hall hearing filled up so fast that eager attendees had to line up outside the door, waiting until someone left the room before they were allowed to enter. The Observer watched as one sign-bearing group debated queuing up in the punishing heat before deciding against it.

END_OF_DOCUMENT_TOKEN_TO_BE_REPLACED

Everything You Never Wanted For the Fourth of July 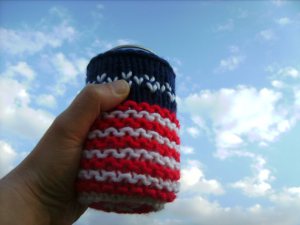 Celebrate Independence Day this year by spending your money on unnecessary displays of affection for our dear country. Be independent! Spend frivolously! Extra points for buying things that were made in the U.S.
6-3-12 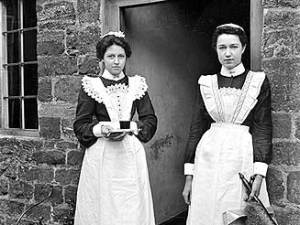 If you thought indentured servants went out of fashion with the Revolutionary War, you’re wrong: apparently the practice is alive and kicking, at least according to Ni Ketut Sulastri, a former employee who worked at Rose and Lawrence Halsey’s Water Mill estate in the Hamptons.

According to the New York Post, Ms. Sulastri, who was hired through an Indonesian intermediary, worked for the Halseys from 2005 to 2008 and is now suing the couple for the brutal and unfair treatment she experienced as their servant. For instance, instead of a promised salary of $450 a month and a 9-to-5 workday, Ms. Sulastri alleges that she earned only $350 a month and was forced to work 15 hour days. And that’s only the tip of the iceberg.

END_OF_DOCUMENT_TOKEN_TO_BE_REPLACED 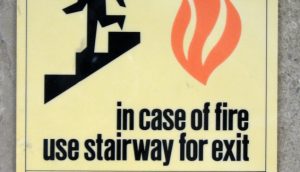 There’s never a shortage of stories about negligent apartment managers and landlords, and the overlords at Stuyvesant Town and Peter Cooper Village have proved that they are not the exception. As charming as this 25,000-resident complex in the East Village seems with its brick exteriors and tree-lined paths, everything is not peachy-keen.

A recent FDNY inspection has found that a number of fire code violations exist in the complex’s 110 buildings, according to the Post. Several fire doors don’t close properly, a few hundred apartment doors don’t close or latch on their own, and the stairwells, which serve as emergency exits, have become toxic wastelands.

END_OF_DOCUMENT_TOKEN_TO_BE_REPLACED 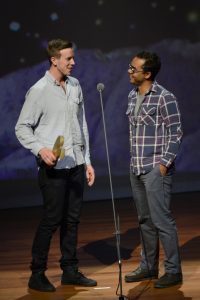 Imperfection might be, um, imperfect, but it is also endearing and refreshing. And, given that this was only Vimeo’s second semi-annual award show, we’ll cut them some slack. After all, it wasn’t the show that people were there for, it was the films. And not just any films: user-generated online films. END_OF_DOCUMENT_TOKEN_TO_BE_REPLACED