Yoga For The Not-So-Young 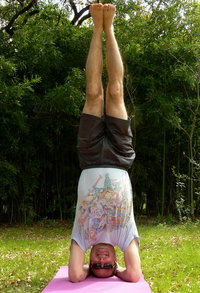 It’s no secret that humans develop aches and pains in the normal course of spending time on the planet, but while many people pooh-pooh it and carry on, Lulu Bhanda yoga teacher Kira Ryder notes that sometimes these changes can have a big impact.

“The small details we take for granted when we’re young become immense as we age,” she explains. Trivial tasks, such as carrying groceries, bending down to tie your shoe or walking up and down stairs can become challenging and painful if not addressed.
One of the ways to alleviate some of this distress and possibly prevent it is through yoga. “With yoga, we have seen many people get their lives back. When people tell us that they are finally able to sleep through the night, walk again and play with their grandchildren without tiring, we know the yoga practices are working,” Ryder says.

But yoga can be intimidating, especially at a large studio where most students are in their twenties and classes have an average of 50 students.

“The thing to remember is that you don’t have to be an athlete or stud to join a yoga class,” says Neal Pollack, a 40-year-old yogi and author of Stretch: The Unlikely Making of a Yoga Dude.

END_OF_DOCUMENT_TOKEN_TO_BE_REPLACED 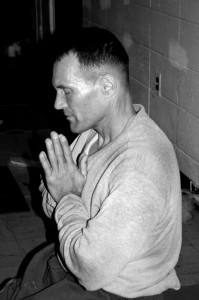 Like most war veterans, Barry Schweiger chose not to seek psychological treatment when he returned from active duty.

“We’re taught in the military to endure pain and hardships, and to be incredible warriors. But many people are forced into that role,” says Schweiger, and when soldiers return home, it’s often difficult for them to seek help or admit they’ve suffered psychological and emotional trauma. “In the eyes of the military, that would be viewed as a weakness, so they just suffer through it.”

Which is exactly what Schweiger did when he came home from Vietnam. As a result, over the next 25 years his anger, hostility and post-traumatic stress disorder (PTSD) caused him to alienate not only his wife and children, but coworkers as well.

And then everything changed when, on a whim, he attended a beginner’s yoga class at his gym.

“Yoga turned out to be exactly what I never knew I needed,” he jokes. “The beauty of it was the slow process, the quietness, and the simplicity of just doing the poses. Anything faster, louder or more strenuous would have killed me. What I needed to do was slow down and learn how to be with myself, not run away from everything going on inside me.”

Now, 15 years later, Schweiger is a certified yoga teacher at Yogaloft in Woodland Hills teaching a class every Friday called Yoga for PTSD. Through his practice he’s been able to work through many of his issues, and hopes to help others do the same.

END_OF_DOCUMENT_TOKEN_TO_BE_REPLACED

When Glendale artist Joy Feuer first visited the burned remains of the Cisco Homes warehouse in Pasadena, she looked beyond the charred furniture ruins and saw potential.

“Everyone kept saying, ‘There’s nothing left. It’s all destroyed.’ But I knew that something could come out of it,” she said.

Months later, Feuer’s vision became a reality when she founded ART from the Ashes, a nonprofit organization that creates art from the wreckage of local fires. In November of 2008 their first show featured monolithic statues, spiral wall installations and free-standing art pieces fashioned from fragments of corroded wood, twisted metal and shards of glass.

On the opening day, flutes of champagne were passed as visitors viewed the 90 works of reclaimed art incorporating materials from the previous fire site. More than 500 exhibit visitors raised $12,000 in donations for Cisco Homes and the charity group Making Education the Answer.