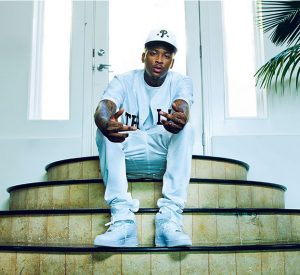 MARCH IS A BIG MONTH FOR YG.

A few days ago, he turned 24. Next week, a documentary filmabout his life will be released on Complex. And in a few days, his debut studio album, My Krazy Life, will drop. There’s been a lot of hype about the Southern Californian’s upcoming album, which features previously released tracks (“My Nigga,” “Who Do You Love?” and “Left, Right”), as well as new music. But, before we get all excited about what’s to come, let’s take a moment to reflect on and appreciate the emcee’s previous work.

YG may be young, but he sure is prolific. From 2008 to 2013, the Compton native, who used to use his bedroom as his “studio,” released five mixtapes: 4 Fingaz, The Real 4 Fingaz, Just Re’d Up, 4 Hunnid Degreez, and Just Re’d Up 2. In other words, his 2009 hit “Toot It and Boot It” might have been his ticket to fame, but it’s hardly his only banger. Listening to all five of his mixtapes in succession is an experience in itself. Sure, not all of his early songs are genius and, yes, many of them tend to focus on the same subjects (women, sex, money, etc.), but that’s what makes listening to his old mixtapes so fun. You can literally hear YG mature and improve from tape to tape. All artists must go through a learning phase wherein they perfect their skills and better hone their craft and, luckily for us, YG just happened to put it all online (and for free, too).

In a few days, My Krazy Life will drop and we at RESPECT. have no doubts that it’ll be a banger. But, before we usher in his new collection of music, let’s give a shout out to the best of the best of YG’s earlier work.