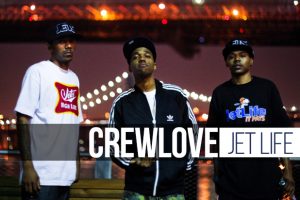 In 2009, when Curren$y started Jet Life Recordings, there were only two other members to the Jet Life crew: Young Roddy and Trademark da Skydiver. In the five years since, Jet Life has grown like kudzu. They’ve added eight more members, most notably, Fiend, Smoke DZA, and Sir Michael Rocks of The Cool Kids, gone on a national 35 city tour, and churned out three solid Jet Life crew mixtapes. They’ve even made a series of mini documentaries called “Jet Life Chronicles” which, according to their website, are a “vignetted look at the day to day life of Curren$y and the Jets.”

Almost every member of the crew is from New Orleans, if not the South, and they’ve all got love for that mary jane. Jet Life’s laidback, stoner cool is an art form in itself and somehow they manage to keep surprising listeners with new jams that are always perfect soundtracks for lighting up, but never get boring or redundant. In 2013, Curren$y signed the most recent artist and first female to the crew, a trippy, experimental, slightly macabre siren named Mary Gold. Though she can rap, she can do a ton of other things, too, and her sound is starkly different from the mellow flow of her squad, which is what makes her addition to the crew so exciting.

With such a hard-working man-in-charge as Spitta, there’s no telling what we’ll see next from Jet Life. But one thing’s for sure, we can’t wait for their next collaborative mixtape because with so many new and different voices on their roster, it’s sure to take flight. (Click HERE for the slideshow)