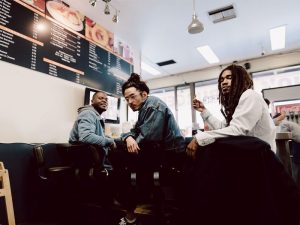 When the Oakland hip-hop quartet Souls of Mischief dropped its debut album in September 1993, it sent ripples throughout the rap world.

Filled with obscure jazz and funk samples, internal rhyme schemes, and live bass, ’93 ‘til Infinity stood in stark contrast to the G-funk, gangsta-dominated, “gin and juice” era of hip-hop that was then sweeping through the West Coast. Mellow, chillout rap caught on like wildfire, and Souls of Mischief’s democratic style of trading bars so that each member got his share of the limelight became a common method for other acts.

It’s now been 20 years since the Oakland crew released its debut album, but Souls of Mischief’s impact is still reverberating — and you can hear their influence in the Oakland group Down 2 Earth.

“I think our formula is very similar to Souls of Mischief’s, even though that was 20 years ago,” says Down 2 Earth rapper Azure. “We’re very much a lyricist lounge type of act, and you can hear the similarities through little nuances, like making the drums extra-heavy.” END_OF_DOCUMENT_TOKEN_TO_BE_REPLACED

Another One Bites the Dust … Sorta

The Bay Area loses HBK rapper Iamsu! to Atlanta, but he promises he’ll be back.

In the last few years, a hot topic of conversation has been the mass exodus of musicians leaving the Bay Area for other locales, thanks to increased living costs, a shrinking artist’s community, and the infiltration of tech. SF Weekly covered the epidemic in a 2014 cover story, John Dwyer of Thee Oh Sees and Ty Segall discussed their decision to leave San Francisco for Los Angeles with Pitchfork, and, earlier this year, SPIN published a tome about the creative greats who have left our region.

And now another Bay Area artist has decided to move on: the nouveau-hyphy rapper and HBK Gang founder, Iamsu!

When I reach the 6-foot 4-inch emcee (born Sudan Williams) by phone on a Wednesday afternoon, he tells me that he’s in the process of moving into his newly purchased, six-bedroom, five-bathroom, three-story house in Atlanta.

“I just got checked for termites, I got all my locks changed, and I set up my cable and my internet today,” he tells me. “I also talked to 2 Chainz, and he’s going to help me build a studio in my house.”

Only a few days prior, the multi-talented 27-year-old — who, in addition to rapping, also sings and produces — signed the papers for the house, which he purchased from his grandmother’s best friend after she decided to move when her husband died.

“Me and my mom talked about it,” he tells me, “and we thought it was a good idea.” END_OF_DOCUMENT_TOKEN_TO_BE_REPLACED 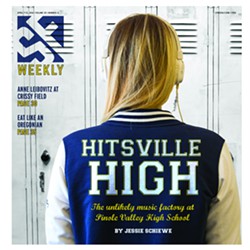 The lunch bell rings at Pinole Valley High School, and hordes of teenagers swarm out of squat, rectangular bungalows.

Since the fall of 2013, Pinole Valley’s 1,200 students have been learning out of 83 portable buildings placed on what used to be a baseball diamond next to the school’s track. The old school, a one-story building dating from 1967, was torn down two years ago to make way for a substantially larger replacement, replete with palm tree-lined walkways and enough classrooms to house 400 additional students. The estimated opening date is 2019, which means three classes of Pinole Valley students will spend the entirety of high school at a campus that lacks an auditorium, cafeteria, gym — or buildings in general.

But on this Friday in March, aside from the facts that there are no lockers on campus nor hallways (other than the outdoor paths between bungalows), Pinole Valley could be any other suburban high school in California. In the central eating area — a collection of cement picnic tables partially covered by an awning, the main hang-out area for students — students dine on packed lunches or meals purchased from one of the two cafeteria kiosks. Seagulls hover nearby to swoop up stray bits of food as a delighted senior hugs a plush white teddy bear while telling a gaggle of girls how her boyfriend asked her to the prom.

A combination of pop and hip-hop songs play from a lone speaker connected to a cell phone carted out to the lunch area by the student government — a weekly tradition, Principal Kibby Kleiman says, that has rolled over from the old school.

END_OF_DOCUMENT_TOKEN_TO_BE_REPLACED 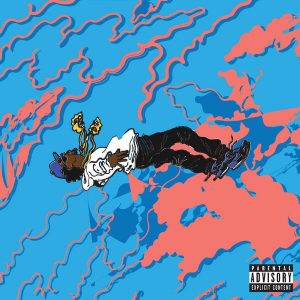 The production quality of the album is on point and the cover art is amusing, too. But if fans were expecting something new, or even inventive, from the HBK Gang member, they’re going to be sorely disappointed. Compared to his other works, this album lacks intensity and comes across as glib and hasty. The over-amped club bangers are monotonous and the lyrics do little to make the songs stand out. There are a few wildcard tracks that are sprinkled conveniently at the end of the album, but though the change of pace is refreshing, they don’t mesh cohesively with the rest of the work. END_OF_DOCUMENT_TOKEN_TO_BE_REPLACED