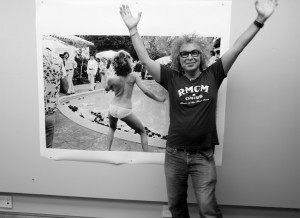 THROUGHOUT THE SEVENTIES AND EARLY EIGHTIES, Brad Elterman made a name for himself photographing candid, evocative photos of both counter-culture and mainstream icons. He photographed Joan Jett flipping the bird while backstage at the Whiskey and Robert Plant as he kicked a soccer ball in Encino. He shot The Ramones and The Sex Pistols, as well as Alice Cooper and David Bowie. He took photos of Madonna and Michael Jackson, and even Muhammad Ali and Brooke Shields.

Elterman was seemingly everywhere and always at the right time, until the mid-eighties when he simply stopped. The photography industry had changed, as had the music and cultural scene, and Elterman lost interest. After over two decades of keeping a low profile and focusing mainly on his business ventures, Elterman returned to photography in the early 2000s.

Though the people in his photographs have changed, his focus has not. Elterman’s photos are just as raw and edgy as they were in the seventies and his passion for photographing musicians and avant-garde artists remains unchanged. In the last few years, he’s snapped photos of everyone from Mac DeMarco, The 1975, Sky Ferreira, and Tyler The Creator to Jared Leto, Kris Kidd, Sandy Kim, and even Paris Hilton. With his upcoming show at Milk Studios in Chelsea later this month, we thought we’d take a moment to catch up with the prolific culture chronicler and shine a light on some of his most memorable photos from the past 30-something years. END_OF_DOCUMENT_TOKEN_TO_BE_REPLACED