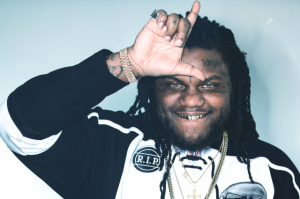 SHORTLY BEFORE MIDNIGHT ON APRIL 1ST, DMV rapper Fat Trel dropped his newest mixtape, Gleesh. The eponymously-titled mixtape is Trel’s first release since signing to Maybach Music Grouplast November and a long-awaited one at that. It’s been almost eight months since the Slutty Boyz co-founder released his last mixtape, SDMG, and fans waited with bated breath to see what the Maybach rookie would come up with next. And Gleesh—thank the rap gods—does not disappoint. Trel still sounds like Trel, despite his upgrade from unsigned to signed artist. He still reps his hometown of D.C. and his love for the ladies hasn’t diminished in the least. LikeSDMG, Gleesh is chock-full of guest artists with features from fellow Maybach signees Wale,Rockie Fresh, Tracy T, Stalley, and the man himself, Rick Ross. Trel’s iconic rough-around-the-edges, trunk rattling sound is still preserved in Gleesh, just with a little more polish and a little more pizzazz. Perhaps the The Washington City Paper put it best when they said, “Gleesh is like a new, upgraded model of the same vehicle.” RESPECT. talked with Fat Trel about the making of his latest mixtape and his relationships with fellow MMG artists. Read on below.

RESPECT.: Your newest mixtape, Gleesh, dropped yesterday. Have you gotten any feedback from fans or know how many times it’s been downloaded yet?