The Memphis-bred Three 6 Mafia MC’s got you covered when it comes to turkey chops, butter cake, and a taste of southern living. 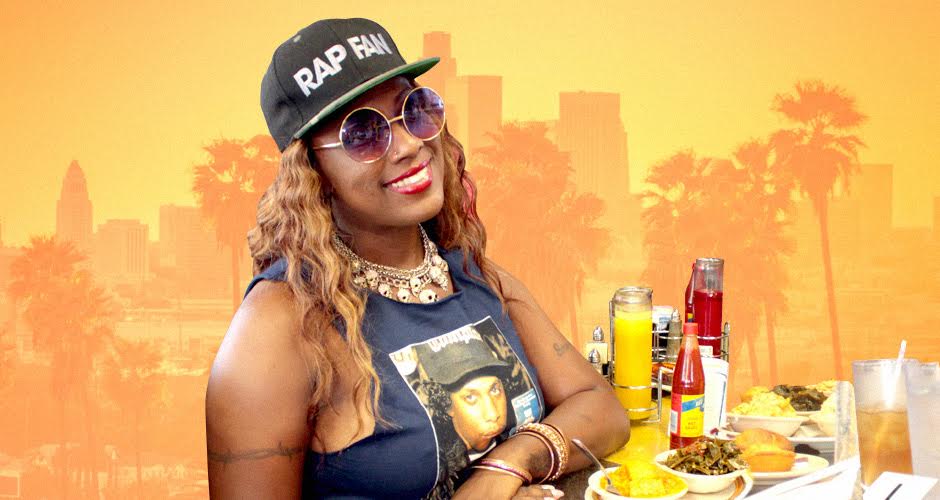 It’s a Friday afternoon when rapper Gangsta Boo pulls into the parking lot of a soul food restaurant in Inglewood. The Tennessee-raised MC—who was the first (and only) female member of Three 6 Mafia—is wearing jean overalls, an Eazy-E t-shirt, and a snap back hat with the words “Rap Fan” emblazoned on the front. Her boyfriend Emmett, a Playa Del Rey native, is in tow, she explains, because today’s his birthday, and she didn’t want to leave him alone. Besides, it was Emmett who introduced her to this very spot, bringing her one step closer to finding comfort thousands of miles away from Memphis.

Boo and her boyfriend walk into the restaurant and choose a booth in the corner next to a wall plastered with photographs. “I normally don’t eat soul food this early,” says Boo. But as she picks up the dense 12-page menu and starts flipping through it, she confesses that she’s actually rather hungry.

And for good reason. Soul food is, after all, the thread that ties Gangsta Boo to her time spent growing up in the South. “My mom, my friends’ moms, everybody cooks soul food in Memphis,” she explains. “You go to Grandma’s house on Sunday and she’d have soul food. It’s just a way of life over there.” 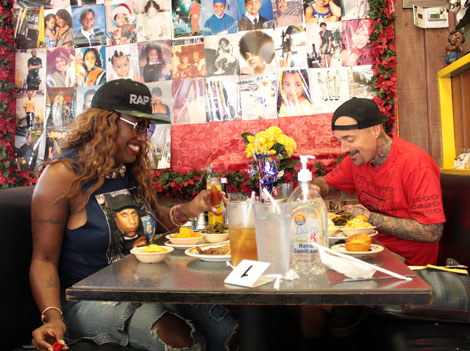 Since moving to L.A. last June (for “the beach and the weed,” she says), there’s been a noticeable dearth of options. The Valley, where she currently lives, is no soul food oasis by any stretch of the imagination. To get her fix, she’s learned to make her way towards Inglewood or South L.A. “A bangin’ ass BBQ place and a soul food place is missing from where I live,” she bemoans. “All country girls eat soul food. We’re known for that. I’m just a product of my environment.”

Through some detective-work, Boo’s been able to identify a few spots that rekindle that same feeling she had growing up. “These restaurants remind me of the South,” she says. “Soul food tastes like home to me.”

Here are three Gangsta Boo-endorsed soul food spots to keep on your radar.

All photos by Jessie Schiewe 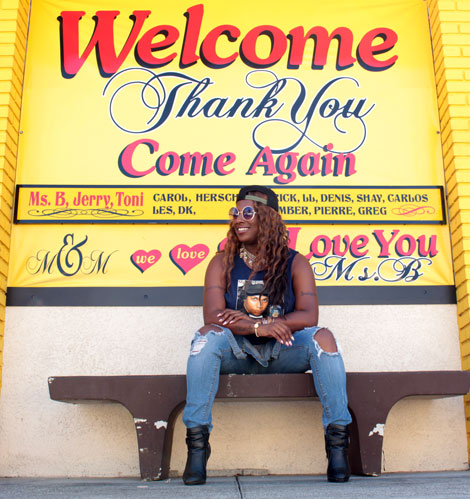 Though it’s a long drive from the Valley, Gangsta Boo believes the schlep to this Inglewood establishment is worth it. The interior of the restaurant evokes Mardi Gras season, with gold ornaments hanging from the ceiling, beaded necklaces pinned on the walls, crystal chandeliers, and lots of colorful accents. License plates from Mississippi line the walls, as well as photos of regular customers and celebrities who have visited the place (shout out to Conan O’Brian and Jesse Jackson). Ms B.’s also has a drive-thru window that’s always busy on Sundays. 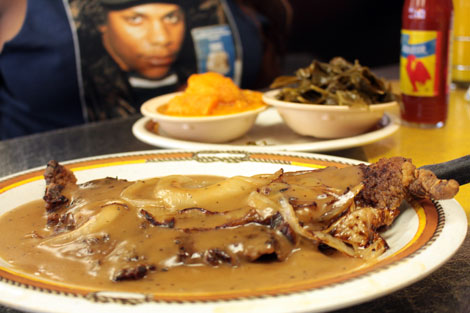 The menu is 12 pages long and is organized by day of the week. (Note: there are 17 different entrees available each day.) “This particular spot got every God damn thing,” says Gangsta Boo. “When I saw chitterlings on the menu, I freaked out. I don’t eat them, but my mother used to cook them all the time when I was little and have the whole house smelling.” 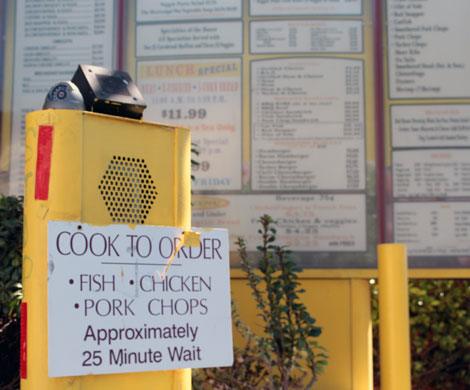 What to order: Gangsta Boo recommends the liver and onions, the smothered chicken, the collard greens, and the macaroni and cheese. She even likes the potato salad here, which was a shock to someone who rarely strays from her mom’s recipe. “I’m not a potato salad type chick as far as restaurants go,” she says. “Not that it’s bad or nasty, but my mom just makes her sweet, so there’s usually sugar, sweet relish, or Miracle Whip in it.” 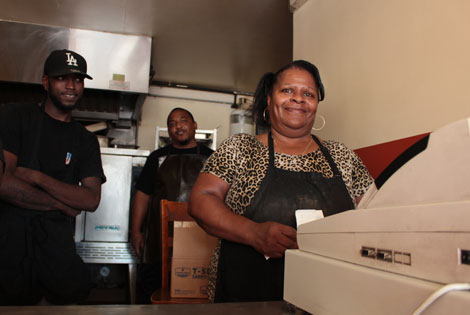 In stark contrast to Ms. B’s M & M’s Soul Food is Carolyn’s Kitchen in Florence. Minus a few tables and chairs scattered about, this is primarily a take-out spot. “It’s sometimes just easier to get your food and go,” especially when the lines can be daunting. 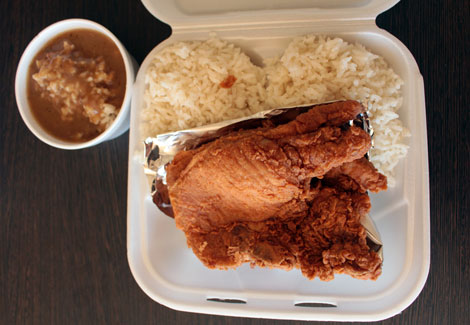 What to order: Gangsta Boo always order the turkey chop or the pork chop, which she says are fried to perfection, without being too rich or fatty tasting. But the real piece de resistance here is the butter cake, a huge slice smothered in a sticky butterscotch, caramel sauce. “The butter cake is a winner. I used to eat butterscotch candy when I was a kid in Memphis, so this reminds me of home.” 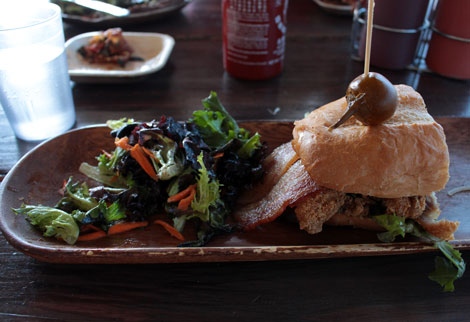 My Two Cents, located in the heart of Mid-City, pushes soul food in an entirely different direction. “It’s like L.A.’s interpretation of soul food,” she says, “and even though it’s not traditional, the food is really unique and good.” In fact, Gangsta Boo is not the only musician who loves this spot—Pharrell and Common are also fans, and the restaurant even catered the Adidas VMA’s after party this year.

Here you’ll find all the staple soul food dishes, but with (usually) a health-conscious twist. The BBQ chicken is made in a gluten-free batter, and oxtails are prepared as tacos. Instead of regular black eye peas, they serve black eye pea hummus, and a lot of the dishes are vegan, too. 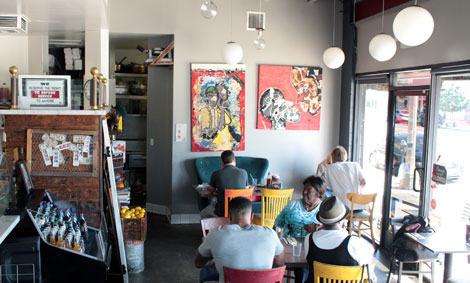 What to order: Gangsta Boo suggests the quinoa mac ’n’ cheese, the lemonade, and the in-house baked desserts. “It was dope to eat so healthy but still be satisfied at the end of the meal,” she says. “It’s definitely the weirdest soul food I’ve ever had, but it sure is good.”