How a sect of politically active, feminist neopagans try to make the world a better place, one night a year. 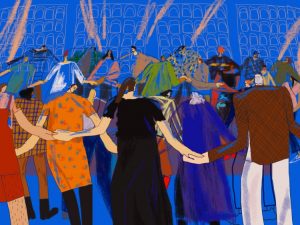 The setting was incongruous.

They were in a midcentury auditorium in Richmond, California, with wooden flip-up seats and the faded lines of an old basketball court still visible on the floor. Over the last six decades, thousands of students had walked across the auditorium’s stage to retrieve diplomas. Eulogies memorializing slain cops had been delivered at its podium, and countless teeth and plenty of bets had been lost during boxing matches held there.

But on that night, there was something different going on in that room. On that night — three days before Halloween in 2017 — a sect of witches known as Reclaimers were throwing a party. They were celebrating Samhain, the witches’ New Year.

Formed in the San Francisco Bay area in 1979, Reclaiming is a monotheistic sect within modern witchcraft that worships a female deity called the Goddess. It is matriarchal in structure, and since its inception, has been led by a curly haired witch of Jewish descent named Starhawk. Though the bulk of its acolytes live in California, there are Reclaiming communities elsewhere in the United States, as well as in Canada and Australia.

Put simply, Reclaimers are magical, “woke” hippies who don’t do drugs or drink alcohol. Instead, they cast spells, hold rituals, go to witch camps, and celebrate seasonal equinoxes. They also really care about the earth and make it a priority to be socially, politically, and environmentally active. Reclaimers are not Trump supporters; they’re more likely to back movements such as Black Lives Matter and Occupy Wall Street. Reclaiming is also a family-friendly religion, comprised of a lot of young parents who know they can bring their screaming children to events and not be rebuked for the noise and commotion they cause.

But while the clamor of kids is normal at a Reclaiming party, there are some things that aren’t — namely cell phones and cameras. I learned that soon after entering the auditorium when a kind, but slightly stern announcement was made over the mic. I was wearing all black, as I assumed one should when attending a pagan event, but I was wrong. The crowd of about 200 was sporting all sorts of colors, as well as subverting gender norms; I saw more than a few men wearing dresses.

In fact, overall, there were very few things that were actually witchy about the night. There were no brooms or pointy hats. No cauldrons brimming with potions; no bats or black cats. Flames weren’t allowed, so the candles were battery-powered, and instead of cackling and screaming, the audience kept quiet, wiggled their fingers in the air, and refrained from clapping.

Everyone was gathered in the heart of the room, sitting in a circle on the floor, buttressed by pillows and blankets they’d brought from home. Those who weren’t sitting were milling about the booths, tents, and tables lining the perimeter of the auditorium. They each represented a different social, environmental, or political cause, such as homelessness, the #MeToo campaign, and stopping police brutality. The Goddess had her own shrine — a sign on her table read, “Write your dream for the earth here and leave it in the black bowl.” — and the four cardinal directions each had altars. There was also a memorial, consisting of tiny toothpick crosses, for those who’d lost their lives during the 2017 Northern California wildfires.

Remembering the dead and honoring one’s ancestors are huge parts of the witches’ New Year. “Heaviness and grief were very close this year,” Starhawk told me after the event. “This one had an especially serious undertone because of the times that we’re in and because we’ve had these horrible fires.”

Of all Reclaiming’s yearly holidays, Samhain is the biggest deal. “It’s probably our most high church ritual of the year,” Starhawk said. A four-hour event, it included theatrical and ecstatic dance performances, sing-a-longs to songs with names like “We Are a Circle” and the “Elemental Incantation,” and at least two guided, seated meditations. During speeches, audience members were asked to think hard about the kinds of futures they wanted to help create as Samhain is the time of year when Reclaimers look forward and set intentions. There was also a lot of emphasis on turning to the past and getting in touch with the dead during times of need.

“We believe it is the ancestors’ jobs to help us and look after us,” Starhawk said at one point during the night. “And I think we need their help. We need so much help from this tangled nest of threads and lies and deception and meanness.”

Except during songs, when the whole group recited lyrics projected onto a screen near the stage, it was a startlingly quiet event. During the guided meditations, you could hear the kids playing games in the lobby as their parents visualized riding a barge across a slow-moving river.

It livened up in its last half-hour, when everyone stood up from the ground to join in the Spiral Dance, a “powerful energy configuring spell” and an annual tradition for Reclaimers. A woman in a white gown and crown corralled us into two interlocking circles that spiraled in and out of each other. Hands clasped, the dancers belted out the chorus to Starhawk’s 1989 hit, “Let It Begin Now”:

Let it begin with each step we take,

And let it begin with each change we make.

And let it begin with each chain we break,

And let it begin every time we awake.

I was grasping the hands of two older men — one of whom was a dead ringer for Larry David — and it wasn’t long before I realized how chaotic a Spiral Dance can get. The tail was lagging, so I was stretched in two directions by my partners, all while trying to side-step gracefully and not stomp on the feet of others. People were belting out different parts of the song because there was not one predominant voice to follow, and Larry David’s doppelganger kept screaming, “We are alive!” for some reason. Because the spirals turn in on each other, it was also an eye contact-heavy experience, involving a lot of staring into the faces of smiling, happy strangers.

The Spiral Dance is a whirlwind of motion surrounding a select few who remain seated in the middle of it. (Photo: Michael Rauner and Richard Man)

Unlike earlier in the night, when everyone acted quiet and reserved, there was a wild exuberance in the air and unbridled joy within the Spiral. Described by one witch during the night as a “powerful energy configuring spell,” the Spiral Dance also involved the literal weaving of spells. As the dance happened, a woman behind a loom wove together pieces of yarn that attendees had cut earlier in the night and imbued with their magic. “It is the spindle from which we spread this love,” Starhawk told participants.

Shortly after 10 p.m., the dance ended and the rituals wound to an end. After a final guided meditation, the crowd joined together for a closing rally before venturing out into the cold October night.

We are witches, we weave spells.

This time, they chanted it in unison.

END_OF_DOCUMENT_TOKEN_TO_BE_REPLACED

It was lunch hour on the corner of Lexington Avenue and 47th and the intersection was teeming with people. A Prêt-A-Manger employee proffered brownie samples to passersby on a silver tray. A family of five, laden with backpacks and rolling suitcases, searched for a...